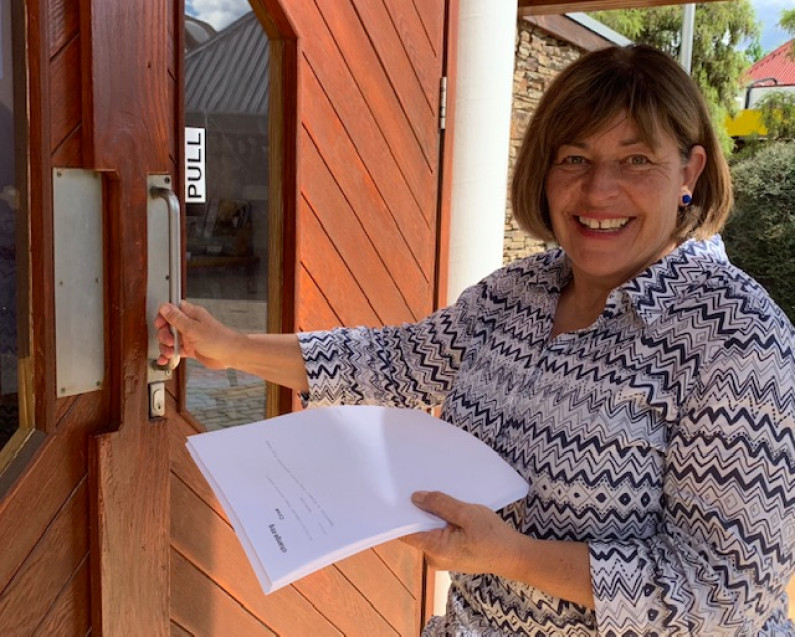 The petition, along with supporting comments, was handed over at the CODC's Cromwell office.

"This is an important record of the views of Cromwell people," said Ms Calvert, noting that the formal RMA process, especially for further submissions, can be complex and confusing to residents who are not trained in this aspect of planning legislation. Councillor Calvert handed over the Crux petition inside the CODC's Cromwell offices on Monday afternoon.

"We understand that the petition does not have formal status under the Resource Management Act, but it is still essential that the Central Otago District Council uses all means possible to gauge public opinion in the context of the new Masterplan, as well as keeping its finger on the pulse of Cromwell."

Shirley Calvert says that it's not possible to estimate an exact time frame for the Plan Change 13 process to be heard, but she has highlighted to Crux the fact that the process can require further reports from the developer, at the developer's expense.  Any decision from the Commissioners can be appealed.

The Plan Change has attracted unprecedented opposition in Cromwell with many arguing the new River Terrace subdivsion will damage the Cromwell community's future as well as disrupting nearby orchards and the Highlands Motorsport Park.

Highlands has invested significant funding not only into their own business but into the Cromwell community. Crux has established that the CODC will be compelled to act on any noise complaints from the new subdivision, regardless of whether people living there have signed an agreement preventing such complaints. CCB Chair Neil Gillespie - "impressed and encouraged by the number of people who have signed the petition."

Crux also invited Cromwell Community Board Chair Neil Gillespie to present the petition but he declined on the basis that he was also part of the Central Otago District Council Hearings Panel. Mr Gillespie said however that he was "impressed and encouraged" by the number of people who had signed the petition.

Cromwell Community Board member Robin Dicey has organised a separate survey on Plan Change 13 that can be accessed here.

Read: The Crux guide to what you need to know about Plan Change 13.

Read: Resident Simon Giles summary of why the Cromwell community is so opposed to the River Terrace subdivision.