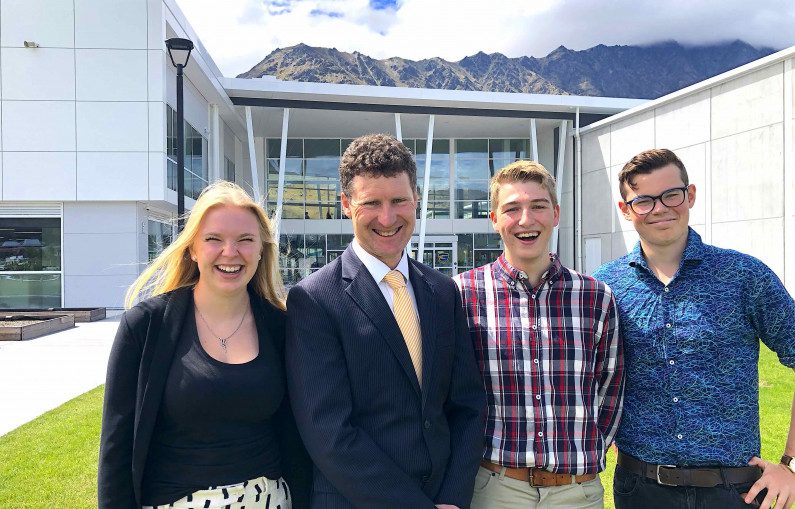 Unexpected but Real - The Young Philanthropists

In what many people might see as a highly unusual, but welcome, move a group of Queenstown teenagers have set themselves up to teach young people how to be - philanthropists.

Usually philanthropy is associated with older members of the community who might have just sold a business or invented the next big thing in Silicon Valley, but Generation Give is an entirely new approach.

The idea is to teach Wakatipu High School students how to become the next generation of community and non profit leaders.

The Generation Give team of three former WHS students is being mentored by the Wakatipu Community Foundation who will provide guidance on governance, tax law and the fine art of extracting money from the community for worthy causes. As anyone who has ever been involved with fund raising will tell you - it's not easy.

Hugh Taylor, Beatrice Onions and Chris Belmont are not nervous about the size of the task, instead seeming to be genuinely excited at the challenge of it all. WHS principal Steve Hall backs the idea, telling Crux "This will be a huge character building adventure for the team and it will also involve current students at the school who will help them make decisions on which are the most deserving causes to benefit from this initiative."

In addition to the support from the Wakatipu Community Foundation, two local sponsors have come on board to give the Generation Give philanthropy fund a kick start. Craigs Investment Partners and Roost Mortgage Brokers have both contributed seed funding that will underwrite the Generation Give campaign.

The target total for year one is around $10,000 rising to $20,000 in years 2 - 5. The Generation Give project is a pilot for a national programme to be known as Youth Philanthropy NZ. Many prominent local supporters will also be part of Generation Give project including Sir Eion and Lady Jan Edgar, Mayor Jim Boult along with Dick and Diana Hubbard.

Crux sat down with Generation Give member Beatrice Onions who explained how the project will work and how it will be guided.

Beatrice Onions of Generation Give outlines to Crux the project's goals.