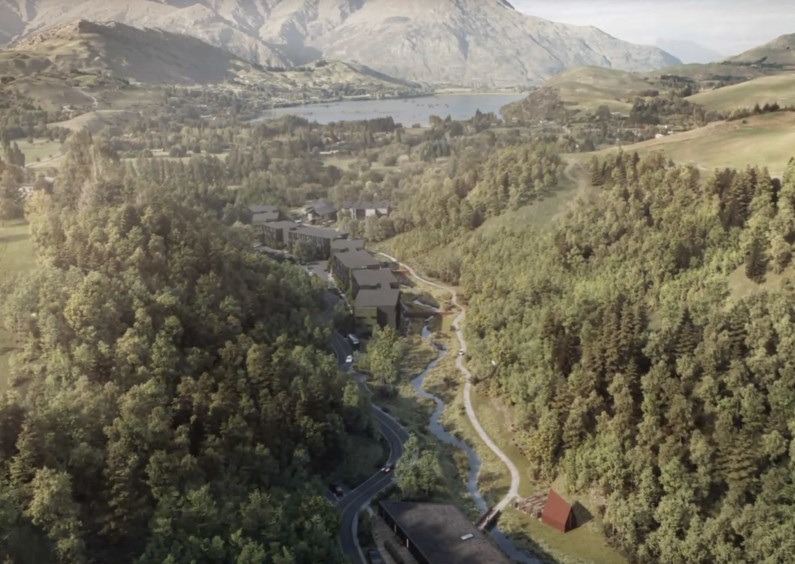 Two days of intense resource consent hearings over the proposed 380 room Waterfall Park resort, near Lake Hayes, are winding up in Queenstown today.

The hotel developer, Winton, has presented a vast amount of detailed evidence which it claims proves that the environmental impact of the project will be minimal. The company has already planted over 16,000 native plants to fight erosion and has advanced plans to control sediment run-off during construction of the resort.

In addition, Winton proposes to install a weir in Mill Creek that it says will increase habitat variation for aquatic communities upstream by creating areas of slower flowing and deeper water, a feature that will also benefit the trout spawning habitat.

It also plans a new residential subdivision near the proposed hotel, at Ayrburn farm, and claims that the replacement of farming with houses will reduce Lake Hayes water pollution by removing farm animals and the use of agricultural fertiliser.

Winton is the company behind Wanaka’s Northlake subdivision, Queenstown’s Hanley’s Farm and the proposed River Terrace development in Cromwell.

Today the Winton evidence was challenged by the Friends of Lakes Hayes group as well as local architect John Blair. Richard Bowman and Kathleen O'Sullivan of the Friends of Lake Hayes Society. "You can't manage what you don't measure."

She was backed up by Friends of Lakes Hayes’ Richard Bowman who criticised the lack of defined water quality levels in the Winton proposals. “You can’t manage what you don’t measure” he argued.

Earlier water scientist Dr Ruth Goldsmith had told the commissioners that the Winton environmental plans were solid and deliverable. She was supported by barrister Warwick Goldsmith who detailed extensive measures that Winton would take to protect the Waterfall Park environment. Lake Hayes architect John Blair "Why is it so big? The rules should be the same for everyone."

John Blair, an architect who lives near the proposed Waterfall Park development, delivered a carefully considered attack on the project based on the fact he had lived in the area for over 40 years and was an experienced hotel designer.

He told the commissioners he had designed the Crowne Plaza hotel where the resource consent hearings were being held.

“Why are the height rules being changed for this development?” he asked. “The proposed hotel is 50 – 70 per cent higher than the agreed limits. Surely there should be one rule applied to everyone. Why is it so big?”

Mr Blair went on to say that, in his view, the purpose of the resource management act had got lost in complexity and the real purpose of the act should be “to avoid avarice.”

He said he was concerned the Waterfall Park project could be sold to an outside investor, before it is even built, once all the paperwork had been granted. He said the lack of an identified hotel operator supported this theory.

He told the commissioners that in his view “change should be for the better and not for the worse.”

The commissioners now have up to fifteen days to make their decision.