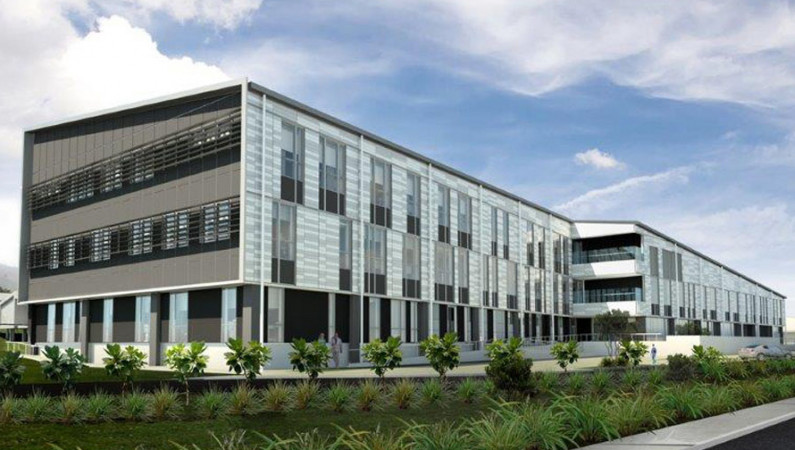 It is becoming increasingly obvious that the current Labour Government has a problem with Queenstown.

Yesterday it was announced that $140 million was being given by the Government to the West Coast, mainly to support tourism infrastructure, and just last week the Government handed over $22 million for a new Buller/Westport "integrated health centre" on top of the $80 million already invested in a new hospital for Greymouth. At least $1.4 billion is being spent on a new Dunedin hospital. The Government announced today $118 million for tree planting.

Queenstown has received $6.5 million for a patch up of our old and small Lakes District Hospital. This is in spite of a district population base similar to the entire West Coast and three million visiting tourists each year. The Lakes District Hospital - "woefully inadequate" even by the Southern DHB's standards. Contrast this with our main image above of the new hospital being built in Greymouth that has a district population of just 13,500.

Mayor Jim Boult has so far drawn a complete blank in his efforts to get a bed tax introduced or get any significant financial grant from Shane Jones' Provincial Growth Fund. A new private hospital is expected to provide some relief - but there's no Government funding going into the project even though the Southern DHB is expected to lease space in the new facility for some free public health day surgery services.

Crux asked the West Coast DHB to shed some light on how it obtained $100 million for two new hospitals/health facilities when residents have access to both Christchurch and Nelson hospitals, much in the same way that Southern Lakes residents have access to Invercargill and Dunedin hospitals. After a delay of seven days, the West Coast DHB's General Manager, Philip Wheble provided this statement to Crux. "Capital funding for the planned Buller/Westport health facility has been publicly confirmed by the Ministry of Health (MOH).  This means that MOH will build Buller Health and handover the completed facility to West Coast DHB as an operational asset, by way of an equity injection.  We will then pay 6% pa on the net asset value – this expenditure will be paid from our population based funding."

"DHB's do have the option of using reserves built up from depreciation for big projects but generally these aren’t enough for large builds."

This statement from the West Coast DHB is really important in the context of the Crux 7,000 signature petition calling for a new Southern Lakes hospital. Basically they got the money from the Ministry of Health.

Crux asked the Health Minister's office as well as the Southern DHB to comment on the West Coast health funding, contrasted with Southern Lakes health funding.

Previously the Health Minister's office has told Crux that a new Queenstown Hospital was a Southern DHB matter. However, the West Coast statement makes it clear that large scale, hospital funding is in fact a central Government issue. In a Crux video interview earlier this year, Finance Minister Grant Robertson acknowledged that the lack of a Queenstown hospital was a known and ongoing issue at Government level but said that no funding request had been received by his office. All of which points to the next question - has the Southern DHB asked the Government to fund a new Queenstown district hospital. In a statement to Crux today, the answer to that question is "No".

We have decided to publish the entire Southern DHB statement which contains new information that is both intriguing and surprising. In summary the SDHB's Chief Executive Chris Fleming is saying that they can't find the staff to support a Queenstown Hospital, there's not sufficient need and the idea is "not practical." Here's an extract from the statement.

"The key issue here is the overall sustainability of the workforce required to deliver this (hospital)– an issue that is faced not only locally across Southern (DHB's territory), but also across the country and internationally.  It is far too simplistic to assume that one can simply provide funding to build a facility to address this."

Previously the Southern DHB has referenced the Government population based funding model as a reason not to build a new hospital and even suggested that the Queenstown population is "too affluent and healthy" to justify a new hospital. "Growth does not equal need" was the comment to Crux from the SDHB's Karl Metzler earlier this year.

Here's the Ministry of Health's own list of the Government's new investment in hospitals and health facilities.

Crux appreciates the considerable effort that has gone into the SDHB statement and encourages our audience to take the time to read it in its entirety. It can be accessed here.

However, the bottom line remains that while Government money continues to pour into other regions, there's little for Queenstown and the Southern Lakes. Our Mayor, Jim Boult, has put pressure on the NZTA to pay urgent attention to our crowded roads that are rapidly approaching grid lock. A memorandum of understanding was supposed to be signed in November to lock different agencies in to finding transport solutions - but it is now November 30th and no announcement has been made. In fact at almost every turn the Government answer to requests for funding to solve Southern Lakes congestion, tourism, health, employment, housing, infrastructure, environment and transport issues has been "No."

Is it us or is it them? Either way, there is a very serious problem somewhere. History suggests, sadly, that it will take a disaster, meltdown or a catastrophe to produce meaningful progress.