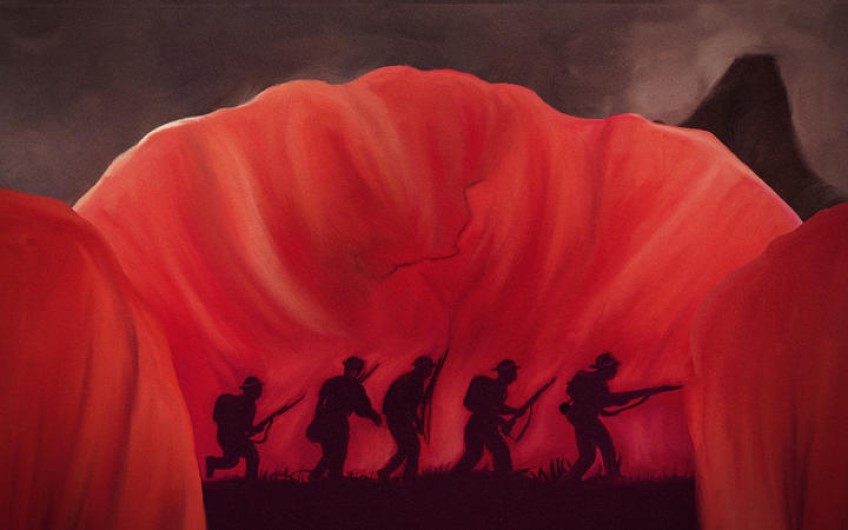 'I had tears in my eyes': Thousands attend Anzac Day services around Aotearoa

Attendees at Auckland's Anzac Day commemorations say they are thankful to be able to gather again after missing a year due to Covid-19.

Paul Banks, whose father flew in combat in World War II and whose mother was in the civil defence corps in London, said the service was particularly special.

"It's been two years since we've had one of these. By the time The Last Post and the Lament were played, I had tears in my eyes. It was far more moving emotionally for me than I can remember in the past," Banks said.

Chris Maud's father also flew in the Air Force in the Pacific in World War II.

He said it was great to be back.

"Some people would see Anzac Day as the most important commemorative holiday of the year ... that's reflected in the sheer number of people here who arrived before dawn."

He said last year - when people were urged to stand at the end of their driveways as a tribute - was memorable in its own way.

"Last year a neighbour of ours went to a lot of trouble to conduct an Anzac service in the driveways. We met neighbours we didn't know. Even though there wasn't a service here last year, I think a lot of that went on on the streets of New Zealand."

Prime Minister Jacinda Ardern gave a short address, paying special tribute to the women of wartime New Zealand - those who served and those who sacrificed in other ways.

"Each Anzac Day we commemorate the past but also the present. So to those who give of themselves now - men and women - who've cared for us through Covid-19, given comfort in times of disaster, performed rescues in the midst of crisis, we say thank you," Ardern said.

"Our commitment to you on this day is not just our gratitude, but our pledge that while we may call on your commitment, we will do all we can to prevent calling on you to make the ultimate sacrifice. That we will do what we can to stop war, to prevent conflict, to say to mothers: we will remember them so you may never again lose them."

However, army veteran Kane Te Tai, who served in Afghanistan, said not enough was done to help past and present members of the Defence Force.

He said the government only seemed to want to know about veterans around Anzac Day but every other day they did not seem to care.

Auckland Mayor Phil Goff spoke of his uncle in the Pacific, and nephew in Afghanistan - who both died in action.

He said they were two of 30,000 New Zealanders who did not return home.

"We pray today that those who sacrificed their lives did not do so in vain, but that we will one day realise the better world, the more just and peaceful world, that they fought and died for," Goff said.

In Hamilton, thousands attended the dawn service and a civic service later in the morning. Both were at the Cenotaph.

Many were pleased to be able to again attend in person.

Veterans and others marched from Victoria Street the short distance to Memorial Park just before dawn.

Defence Force chief of intelligence Air Commodore Tim Walsh said Anzac Day was not only about remembering those who made the ultimate sacrifice, but also the place of the military today.

"Like those that have gone before them they are dedicated to upholding New Zealand's national interests and the values we hold dear."

Defence Force chaplain Colin Mason said Anzac Day was to remember those who died for security, liberty, peace and freedom.

"The cost and brutality of those days at Gallipoli still haunt us as a nation. Time has not diminished the impact this campaign had upon our country and communities."

Borneo and Vietnam veteran Gordon Dalziel, 75, was unable now to march in the parade but was still proud to be there.

"My friends who are not with us no more. It is just good to see that they are remembered. It's amazing to see how many people there are here."

'We wouldn't be here if it wasn't for them'

After the service people reflected on why they were there.

"I always find it beautiful. My daughter is six and we come every year since she was born so we have made it a family exercise to make sure we pay our tributes," Ngawai Smith said.

"Getting up early one day a year to show that we and value the sacrifices that were made for us is a small price to pay."

"I think because we didn't have it last year as well everybody has come out, even more, this year,'' Wendy Park said.

"It was awesome, it was awesome to see so many people out here, all ages," Steve Clayton said.

While admitting to not being much being a morning person she was pleased she came along.

"Actually a lot more people here than I thought there would be and I think that is fantastic especially kids.

"Bit humbling to know we wouldn't be here if it wasn't for a lot of them, a lot of people who lost their lives."

Members of the public laid poppies at the base of the Cenotaph.

In Christchurch, thousands of people - young and old, were able to gather for the Dawn Ceremony in Cranmer Square. It was a cold morning recording about 3C.

Christchurch Mayor Lianne Dalziel said there was a real sense of "togetherness".

The city's oldest World War II veteran, 108-year-old Bill Mitchell, said the service in Christchurch had been beautiful except for the cold.

Mitchell served in the Air Force's engineering service in the Pacific during the war. He said the service in Christchurch had been beautiful except for the cold.

He said the secret to his age was drinking rum and coke.

About 10,000 attended the https://www.rnz.co.nz/national/programmes/news-special/audio/2018792970/anzac-dawn-service-from-pukeahu-2021 dawn service] at the Pukeahu National War Memorial Park.

The National Youth Pipe Band of New Zealand at the 11am Anzac Day service in Wellington. Photo: RNZ/ Emma Hatton

Short said it was a reminder of how many people cared about the country's servicemen and women. He said the services were becoming more popular.

Governor-General Dame Patsy Reddy acknowledged those who gathered in Wellington and around the country for commemorations, and also those who could not make a service but were reflecting at home or elsewhere.

Gordon Sutherland from Johnsonville attended the national service in Wellington. He is a veteran who fought in Korea told of his experience, recalling the horror of seeing Napalm used.