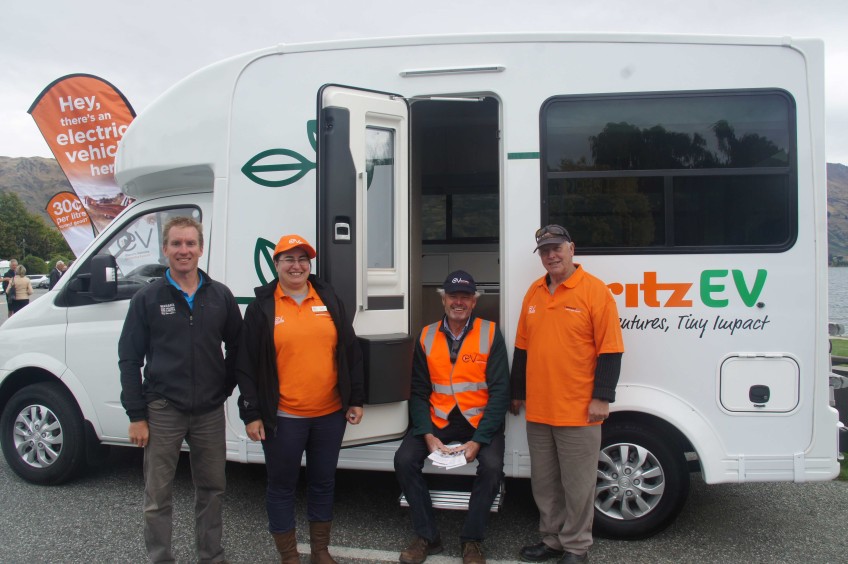 With petrol prices over $2.30 a litre, the annual electric vehicle road trip couldn’t have picked a better time to roll (quietly) into Wanaka. As their name suggests, they are quite literally ‘Leading the Charge’ on electric cars, driving the length of the country to change people’s perceptions. The fleet, which includes an electric campervan from Queenstown, arrived and parked up on Wanaka’s lakefront around 3pm today.

As with any tech breakthrough (did anyone else think the idea of putting music on your phone was outrageous?), there are plenty of preconceived ideas around electric cars, both true and untrue. But Carl Barlev, who started the battery powered road trip and its trust, Better NZ, in 2015, is on a mission to give people a chance to have their minds changed.

The full Leading the Charge fleet in Wanaka on Thursday afternoon

Mr Barlev, who worked for Tesla in Norway for six years, and brought one of the first two electric cars into New Zealand in 2014, says the uptake since then has been massive. “We were late to start, but our growth rate has been one of the highest in the world. We’ve had over 100% growth every year, and the biggest limiting factor has been people’s perceptions around electric cars. The best way to change that is to give them a chance to drive one,” he says. 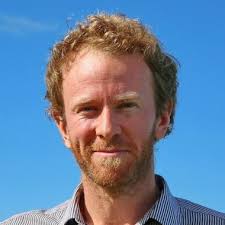 Carl Barlev "We were late to start but now we have one of the highest EV adoption rates in the world."

And what exactly are these perceptions? To start with, for many the aspiring environmentalist, an electric car is often labelled a ‘later’ thing, a ‘when I can afford it’ addition. And it’s true, a brand new high-end model with a range of 400 kms will set you back over $50k. But, as Mr Burlev explains, most EVs in New Zealand are second hand imports from Japan. “A second hand Generation One Nissan Leaf, which is an eight year old car, is selling now for around 11-12k,” he says, “And that’ll give you a 80-90km range.”

Once you make this investment, though, your EV will be seven times cheaper to run than a petrol car. With 18% of New Zealand’s greenhouse gas emissions coming from petrol and diesel transport, it’s a worthy cause, especially given that we are one of the few countries where our power comes from renewable energy sources.

Let’s come back to that ‘range’, though, because it’s this (or lack of) that also has people hesitating to make the switch. The range is how far you can drive your electric car before you’ve got to stop and charge up. While the latest purely electric models could get you from Wanaka to Christchurch without stopping, the cheaper (second hand) ones are more limited. That being said, a plug-in hybrid can take you further, but you’ll be using petrol.

According to Mr Barlev, charging infrastructure has been a limiting factor in New Zealand. It’s actually been Steve West, the co-founder of Better NZ, who is responsible for building the network up to what it is now, which includes 140 Fast Charging stations across the country. Depending on how drained your battery is, these stations will take about fifteen minutes to get you back up to 80%. There are also apps around now, such as PlugShare and PowerTrip that help EV owners overcome ‘Range Anxiety’ (yes, it’s a thing). These apps help predict your driving range, track your battery performance and find charging stations on your route.

According to Dave Hawkins, the founder of Central Otago’s electric car club and organiser of today’s event, the lack of charging infrastructure has posed a problem for Wanaka EV owners. “With a cheaper model, you’re limited to local runs - you can’t quite get to Omarama, and there are no chargers up the West Coast until you get to Hokitika,” he says. Dave Hawkins and his Nissan Leaf - "Some cheaper electric vehicles can't even get to Omarama from Wanaka."

“The charging situation is much better than it used to be, though, and the network is building,” Mr Hawkins says. There are now two fast charging stations in Wanaka, and more in the area including Cromwell, Frankton and Ranfurly. Mr Hawkins estimates that there are around 70 EV owners in the Central Otago area.  He bought his first electric car eighteen months ago, and, after the previous group’s owner left town, started a new one several months ago. His aim is to spread the word and get more people making the switch from gas to electric. Looking at the roads around Wanaka (and the average car type), it’s easy to imagine another question on people’s minds. Electric cars may be good for the environment, but can they tow the boat or get the family up the mountain? Mr Barlev says electric vehicles are in fact far more powerful than petrol or diesel cars. “We’ve got a towbar on the back of our Nissan Leaf, and we go to the hardware store and pick up timber. Compared to a 4WD, they’re not as good on slippery terrain, but compared to any 2WD they’re far more powerful.”

While we can’t all afford them, these newer, all-terrain EV models may be giving us a glimpse of the future. They do have their work cut out for them, though, given many Kiwis’ addiction to new diesel utes -  for every electric car we bought last year, we bought 64 mostly-diesel double cab utes. But the government maintains an ambitious target - having a light vehicle fleet made up of more than 95% electric or zero emission vehicles by 2050.

There are, of course, hurdles aside from range anxiety and our love for gas guzzlers. For one, the lithium and cobalt used to make batteries are finite resources and must be mined, for which the practices right now are questionable at best. And, as these lithium batteries eventually need to be replaced, we’re faced with a mammoth battery recycling challenge.

Mr Hawkins says that at this stage, while battery life decreases to about 80% after five years and 70% after ten, no one has had to replace a battery in New Zealand yet. He also says that used electric cars driven in New Zealand aren’t covered under warranty – so you’re looking at about $5k for a second hand battery replacement.

As fast as the unintended consequences appear, though, people are looking for and coming up with solutions. Most major EV manufacturers have started recycling batteries, and Taiwan has come up a battery sharing system. It’s going to be a pretty big job to keep the world’s batteries out of the landfill, but one that the brightest minds in technology are (hopefully) mulling over.

While the top of the range electric cars may still be elite in their pricing, they’re certainly getting cheaper and cheaper. After all, the latest of human inventions have always been for the wealthy to try out first, eventually trickling down the pecking order. The movement towards electric is certainly a step in the right direction, and one that’s gaining speed fast.