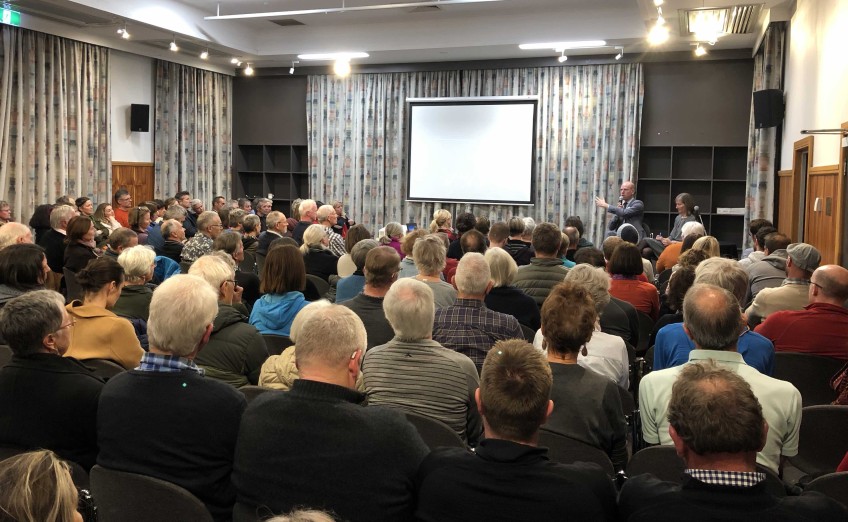 A complete reshaping of citizen engagement was advocated to a full-house audience by democracy commentator Max Rashbrooke in Wanaka last night.

“We need more high quality public debate,” he told the packed-out Armstrong Room at the Lake Wanaka Centre. “The crowd isn’t smarter than the individual until we’ve discussed issues with each other, until we’ve argued about it and come to the best possible solution based on our collective intelligence.”

At a time when both our local governance and democracy are being questioned for their ability to pursue the interest of citizens equally, Rashbrooke said the future will be about deepening collaboration rather than competition. He said we need to create forums that recognise and call on the expertise that exists throughout the community.

The size of the audience suggested no shortage of community engagement in Wanaka, but as Rashbrooke explained, that’s not necessarily enough. “Democracy is about public discussion which involves people stating their decisions with the reasons for them, engaging in the evidence, listening to the reasons of others and reflecting on their own views, and changing their own views in response to stronger evidence.”

“It’s not just about people getting up and saying what they think, voting, or even getting what they want. You’re not really doing proper democratic work until you’re doing trade offs.”

The ultimate goal, Rashbrooke said, should be to have citizens in forums where they are engaged in this kind of democratic work. When done well, these sorts of forums can be a priceless tool for public bodies to use. He drew on examples from Seattle, Taiwan and Brazil, where a broad range of citizens have been engaged early on in the planning process of a given project. Though the methodology varies from country to country, overall the idea is the same: people are taught how to discuss, put in front of the evidence and relevant experts, and given time to debate. They are then able to put forward their informed recommendations.

“When people felt some ownership over the plans themselves, those plans were accepted and had lasting, durable support,” said Rashbrooke.

He said New Zealand is unusual in its lack of forums of this kind, and tends to be behind current global democracy trends. But, he’s pretty clear that we need to up our game. When asked by Kathy Dedo of LINK Upper Clutha how forthcoming our local and central governments are to using these tools, Rashbrooke was optimistic. “I’ve seen a lot of openness and an acknowledgement that the status quo isn’t working in a lot of cases.”

“I would like to see a shift where we have an ecosystem of different ways that councils and governments engage with citizens.”

Rashbrooke also explained (and this may not come as a surprise), that the ability to have good discussions is not innate. We have to work on it, and it needs to be well-structured and moderated. In fact, he said the management of these forums would become a new, key skill of the 21st century.

He explained that there are ways to encourage people into the citizen’s debate, and to make it easier for them to participate. “People have to feel safe, and they have to know that their input will actually make a difference. When they know it ultimately has some kind of power, and will change how money is allocated, people are very keen to take part.”

In response to questioning about how to engage the ‘silent majority’ of young people, Rashbrooke suggested better civics education, as well as lowering the voting age to 16. “Teach them in school where the power lies and how they can take part.”

He was careful to point out that these forums are not designed to be the community versus the government, and explained that the best results have been seen when the forums include politicians as well as citizens. “The politicians do have to accept what looks in the short term like a diminution of their power, but it is absolutely in their long term interest.”

While this wasn’t an evening for discussion about airport expansion or town masterplans, Rashbrooke’s messages were powerful in a mindset-shifting way, asking us to consider and embrace the challenge of true collaboration.

The event was sponsored by Ignite Wanaka, LINK Upper Clutha and Scope Media.