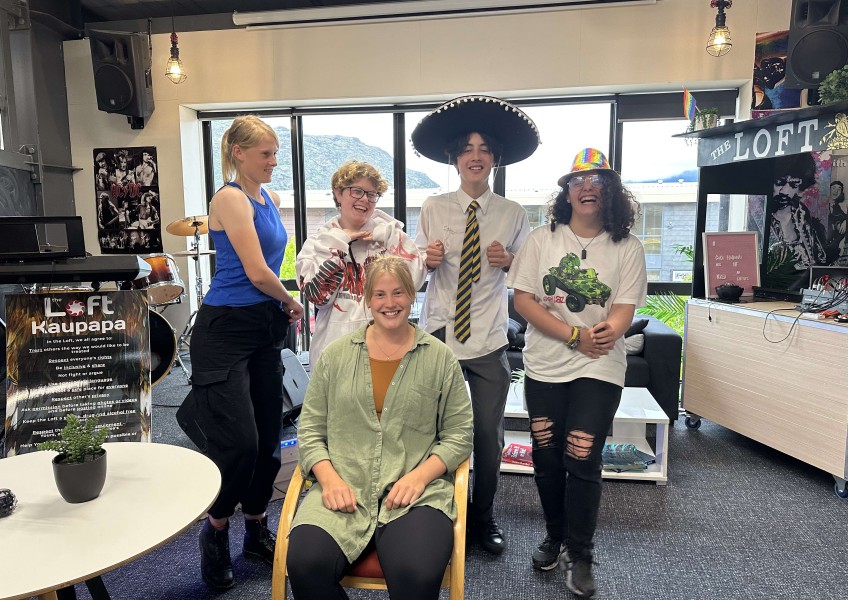 As part of our information campaign with Whakatipu Youth Trust, Crux went along to their Spectrum Club to chat with youth about the big stuff.

The LGBTQIA+ support group meets weekly, its members are vocal and passionate – they were keen to share the biggest issues pressing down on Queenstown teens.

Although it’s hard out there for teens, they agreed the group was a great place to go, where they felt safe and could talk about things.

We snapped a pic of those willing to photographed, but for their privacy, we’ve kept these individual comments anonymous. All comments below are direct quotes.

Some thought sex education wasn’t up to scratch – an RNZ article said the same thing yesterday. They also knew a lot more than their teachers about LGBTQIA+ issues.

"I learned more myself than I did in school.

"I was the most ‘out’ person in my class and I was the one who taught my teacher like, how many extra genders there are and stuff.

"Consent definitely isn’t talked about enough in our sex education.

"It’s getting better, we spent numerous lessons on it [consent].

We were taught about like safe sex and stuff. But we were kind of more directed to just don't have it at all.

"[When] you asked a question and they [teachers] just they kind of tone your question into a statement and don't answer any of it."

"Whenever you would request to see the counselor, it takes like two weeks for them to see you."

"[When chatting with a teacher] I mentioned about like, homophobia and stuff and he said, ‘Oh, yeah, I'll call you up one time, we can have a chat about this.’ And then I just never heard from him again."

"They don’t have enough resources at all for the people that need the help… You have to be really bad to actually get help, you need to be showing physical signs that something is wrong or they won’t help you whatsoever."

"I have this guidance counsellor that I love seeing and she’s great, but she’s only there like two times a week."

"They [counsellors] can only see you for set amount of time because they already have a massive waitlist of people."

"I've come to adults a couple of times with problems, and like metaphorically speaking, they just kind of say put a band-aid on it."

They had similar thoughts about learning support and getting diagnosed in New Zealand.

"My brother is going into high school next year and we were trying to get in-class help for him, but he didn’t get in class help because he wasn’t the worst."

"They don’t have enough resources at all for the people that need the help."

"I actually had someone look at me [test for autism] because of how badly I was being bullied back in my old school, and that was the only reason."

"It’s really hard to get diagnosed in New Zealand, I’m not actually sure if I’m fully diagnosed, they never got back [with the results]."

"I remember when we were trying to get my brother diagnosed and he is officially autistic it took a long time… like years."

Amongst their peers, they also cop a lot of flak for being part of the Rainbow community.

"There’s not many guys that I’m friends with, even the guys that do know they’re all extremely homophobic towards me."

"I remember going back last year in my sex education class… every time they mentioned non-binary, this kid in front of me would just like look at me with a judgmental look."

They’re quite an artistic bunch. Some found there weren't enough ways to pursue these avenues during their schooling and beyond. There were also fears about post-school life.

"I couldn’t do art and drama classes because they were on at the same time, they don’t priorities the arts at school."

"I would love to do something artsy [after school], but we’re not set up for that. Like yeah, we’ve got a great art community but it’s not going to earn me enough money to live. I can’t afford to be a performer, even though that’s my passion."

"There's so much pressure about university."

"There’s the scary thought of like paying rent and paying that on time, having the rent money and like, what are taxes?"

Part time jobs were demanding - it appears the staffing pressures have weighed down our youth.

"My boss, she's really desperate for people. The problem is she's made me manager… she's putting too many hours on me, especially with my health. I've got work tomorrow, Friday, Sunday, Monday, Tuesday, Thursday and Friday, from this Thursday or right next Friday."

"I'm literally the one who takes on all the responsibility, I'm the one who deals with all the complaints because the boss is on her is on holiday...  She's on holiday for five months."