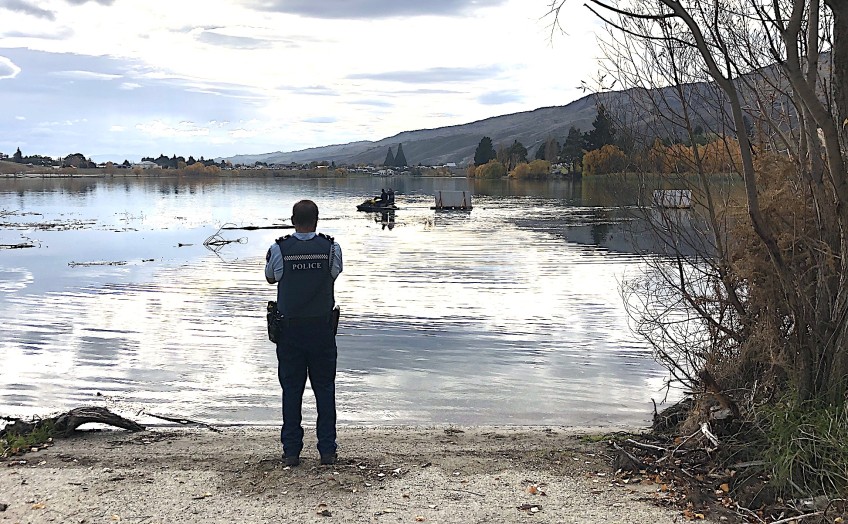 A floating protest by a group of frustrated Cromwell residents has been towed off Lake Dunstan as the town prepares to officially open a new lakeside cycle track connecting the town to Clyde.

Stirred by what they see as a lack of action over many years, members of Save our Lake Dunstan (SOLD) placed protest placards on floating pontoons at the Cromwell Heritage Precinct early this morning.

Later today, celebration events are planned for the precinct as the much-awaited cycle trail between Cromwell and Clyde opens to users.

However, by mid-morning the protest signs had been towed away.

Drone footage of the floating protest (no audio - supplied)

Lake Dunstan Harbourmaster Steve Rushbrook has confirmed the signs were removed by a local contractor under his request due to the navigational hazard they posed to lake users.

“Essentially the signage was placed overnight and had no consent.”

He was alerted to the issue this morning by members of the public and acted to have them removed, he says.

Crux was at the scene this morning and watched as, ironically, the jetski tasked with towing the protest signs away ran into trouble when the driver was unable to negotiate a build-up of sediment and debris at the boat ramp he was trying to exit the lake from.

He says he was there to ensure there was no trouble from protestors.

Members of SOLD at the scene were dismayed to see their peaceful protest towed away.

Meanwhile others were angry the protestors had attempted to detract from the planned official celebrations to open the new Dunstan Trail, the first stage of a 122km project linking Queenstown, Wanaka, Cromwell, Alexandra and Roxburgh, and a much-anticipated boost for tourism in the town.

In a statement, SOLD spokesperson Brendon Urlich said the once beautiful bay at the heritage precinct is now heavily silted and infested with weed – when the water level is low it’s unsightly and smelly.

The newly-completed cycle track will attract thousands more people to the area, he says.

“The track is a wonderful asset, but it just makes it more difficult to understand why there’s been no official appetite to keep our lake attractive and usable.

“Contact Energy, whose Clyde hydro dam is the cause of the silt build up has done only the barest essentials to meet its commitments for resource consents and the Otago Regional Council has also been undemanding and complacent about the state of the lake.”

The group is calling for work by local contractors to keep the boat ramp, the jetty at the Cromwell Heritage Precinct and the beach to the confluence of the Kawarau and Clutha/Mata-au Rivers usable and attractive, while becoming resigned to the fact that longer-term the prospect of a braided river is likely.

“In many other places in Australasia regular attention is given to keep beaches and facilities usable. Cromwell shouldn’t be allowing its jewel in the crown to turn into an eyesore when there is an alternative.”

The Lake Dunstan Charitable Trust (formerly Guardians of Lake Dunstan) says it supports the work of the Cycle Trail Trust and the huge amount of effort to reach today’s milestone, but the community has a right to a peaceful protest.

“Clearly, the Cromwell community is not happy with the state of the Kawarau arm of Lake Dunstan.

“We believe Contact Energy can and should do more and will continue to work with the Community and Contact Energy towards achieving better outcomes for our lake.

“Lake Dunstan is our most valuable asset, and from a tourism and environmental perspective it must not be neglected."

Watch our Southern Lens episode on the construction of the new trail: