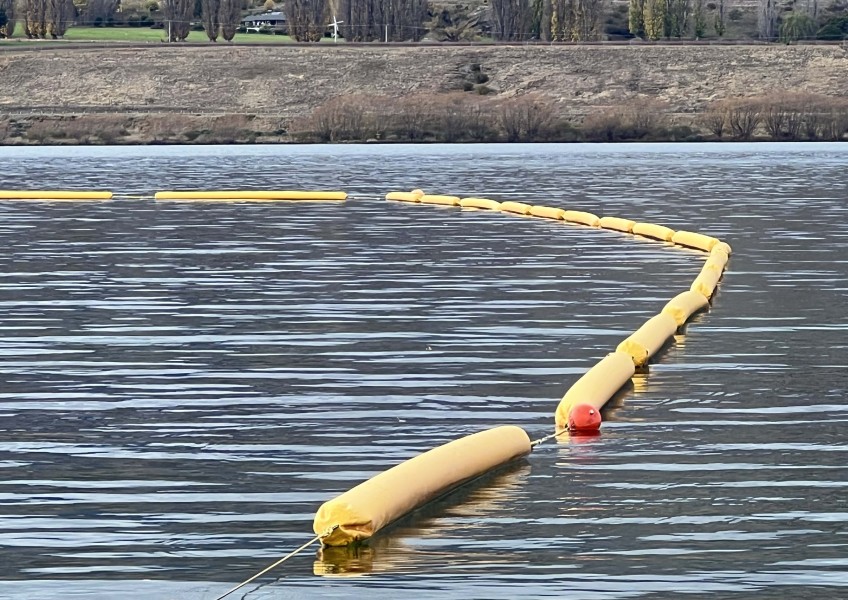 A floating fence hundreds of metres long sectioning off a sheltered bay on Lake Dunstan at Lowburn has not received official sign-off from the necessary local authorities, who are now working to rectify that.

The bright yellow floating tube has been left behind when the Kiwi Water Park removed its operations for the season at the start of April.

This, despite both the permit and the resource consent from Toitū Te Whenua Land Information New Zealand (LINZ) and the Central Otago District Council respectively requiring it to be gone from the lake.

Last week, Crux reported on the issue, which raises questions of increasing commercialisation of a public asset.

At the time of our story, both LINZ and the CODC had been unable to answer questions posed by Crux regarding the legality of the left-behind fence.

Both the organisations have since clarified what's going on, from its point of view.

LINZ did give permission for the water park operator to leave the floating boom structure behind, even though its own permit outlining its expectations for the operation of the water park expressly rules it out.

“While the permit does not allow for the boom to remain during this time, we gave the permit holder permission to leave it in place – no formal variation was made to the permit,” says LINZ head of Crown property Sonya Wikitera.

“We are currently engaging with the permit holder and the Harbourmaster on whether the boom should remain.”

The response from the CODC follows a similar vein: “The type of fence that is in place at present is not within those consent terms, and there is ongoing discussion to rectify this,” a spokesperson for the council says.

What’s still unclear to Crux is whether by giving some kind of informal thumbs-up to the floating fence and blocked-off bay LINZ realised it would be allowing the water park operator to be in breach of both its permit from LINZ and its resource consent from the CODC.

Also unclear: will the conditions of the permit and the resource consent change, so the fence can remain year-round, as is the intention of the operator, or will the fence have to go?

And, if there is a variation to the permit and the resource consent will the public be consulted in any way on this decision?