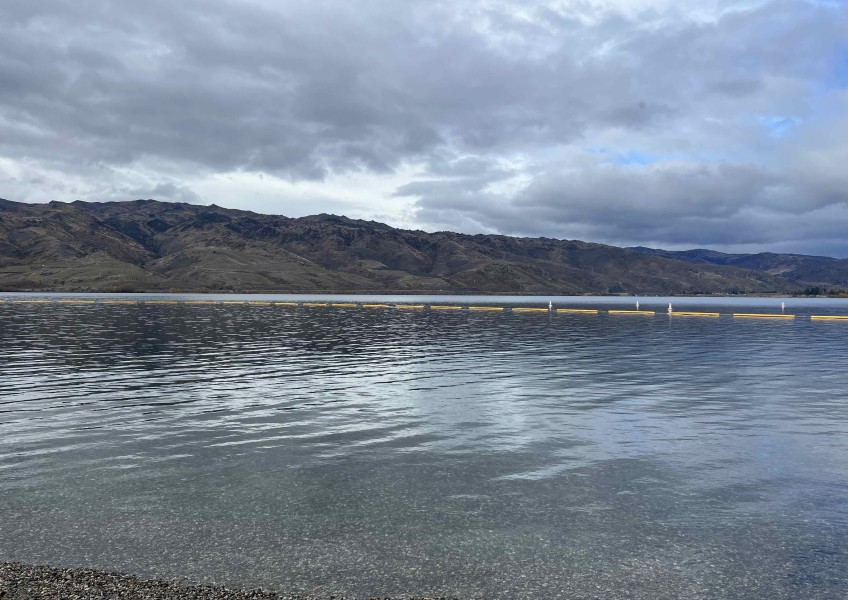 A bay at Lowburn that’s home to a gigantic floating water park during summer will remain sectioned off year-round.

An inflatable fence hundreds of metres long has been left behind after the Kiwi Water Park deflated its business for the season at the end of March. 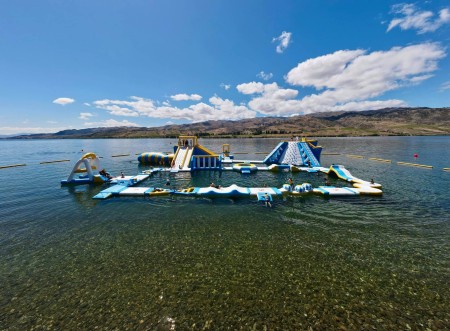 The gigantic inflatable playground that has permission to float at a Lowburn bay for four months each year.

A spokesperson for Toitū Te Whenua Land Information New Zealand (LINZ) says the water park has always had permission to leave its lakebed moorings in the bay year round.

There’s 30 of them allowed for, each a cubic metre of concrete.

But now it’s granted subsequent permission for the floating fence – they call it a boom – to remain in the lake longer-term also.

However, not all lake users are happy with this arrangement - The Lake Dunstan Charitable Trust, among them.

“We are at a complete loss as to the justification for restricting boat access to that section of the lake,” chair Duncan Faulkner says.

The permit given to the water park operators by LINZ says the floating playground’s only allowed on the lake for four months of the year.

Once the business shuts up shop for the summer, it has 14 days to remove all its blow-up devices – with April 15 stated as the deadline for them all to be gone.

Then, Ms Rutherford has to arrange for the Lake Dunstan Harbourmaster to come in and check the moorings that are allowed to be left behind, to ensure they are not hazardous.

If they are deemed to be hazardous, the permit says Ms Rutherford must remove them.

Earlier this week, Crux asked LINZ if it has altered its permit to allow the floating fence to be a permanent fixture on the lake or if the water park is in breach of its permit or if there is some other arrangement completely separate from the permit.

Regardless, Crux has also asked if public access to the bay was something LINZ considered when making its decision.

There’s no quick answer, and LINZ has advised it will be at least the end of the week before it can supply one.

Crux has made contact with the Lake Dunstan Harbourmaster, who has directed any questions regarding the floating fence to the Otago Regional Council media team, which Crux has done.

Last year, a floating protest set up by members of the public close to the Cromwell Heritage Precinct was removed within hours by the Lake Dunstan Harbourmaster as it was believed to be a “navigational hazard”.

Ms Rutherford says LINZ is planning to spray aquatic weed in spring, and the lake level will be lowered to ensure this is effective.

She doesn’t want any boaties to damage their vessels on her mooring blocks, or the mooring blocks still sunk from the public swimming pontoon previously located at the site of her water park, she says.

“This was all pre-agreed with the harbourmaster.” 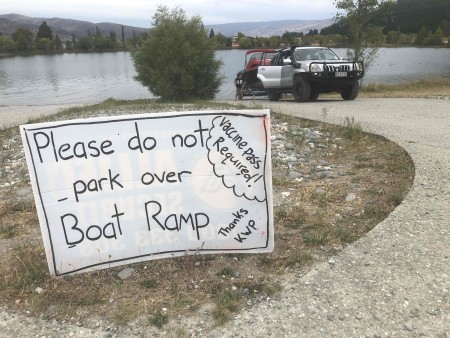 Signage at the Lowburn boat ramp this summer - a requirement of LINZ's permit that allows the Kiwi Water Park to operate on Lake Dunstan.

Leaving some of her gear on the lake is comparable to skifields being able to have their chairlifts on public land during the summer months, she says.

"Both the ski fields and water park are very highly used activities by the general public."

It surprises her anyone has raised concerns with Crux about the floating fence, she says.

Ms Rutherford’s business does pay for its use of the lake – in its permit, LINZ specifies a flat fee of $1,950 plus GST as well as two percent of gross turnover.

LINZ has told Crux it did receive "enquiries" from members of the public this summer regarding parking issues at Lowburn, specifically near the boat ramp.

"In response to this, we have installed additional signage about parking at the Lowburn boat ramp."

Crux has asked for clarification as to whether LINZ or the water park operator paid for this signage, as another stipulation of the permit is the operator must "take all necessary action" to keep customers and their cars clear of the public boat ramp and jetty. Again, LINZ needs some time to answer this question.

Earlier this week, Crux also asked the Central Otago District Council if giving the year-round floating fence greenlight has required a variation to the water park's resource consent and if the council has been involved in the decision - again, the authority has been unable to provide a quick response to this question, indicating an answer may be possible before the end of the week.

Last week, Crux reported on Ian Horsham’s legal challenge of LINZ’s decision to not grant him a permit for moorings not far from the water park. In its decision, LINZ stated a preference to grant permits for commercial operators over individuals.