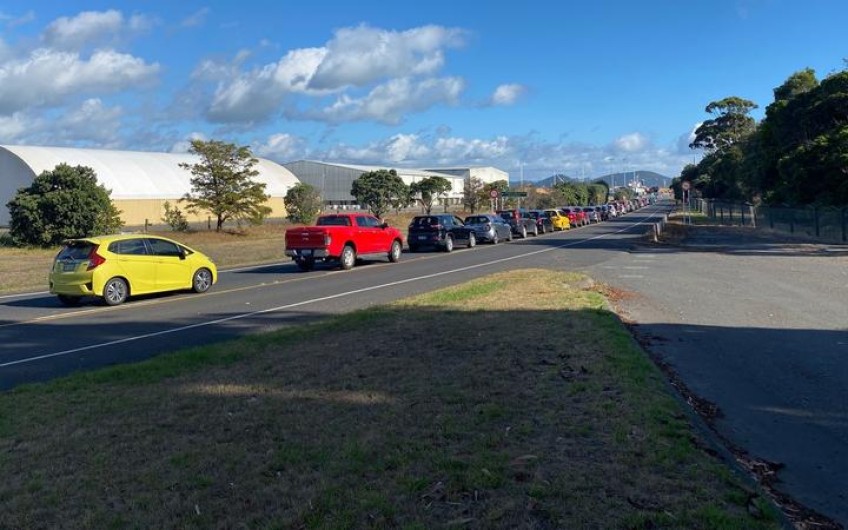 Police are keeping an eye on lengthy queues at new testing centres in Northland, as locals scramble to work out if Covid-19 has spread in their communities.

At Marsden Point near Ruakaka, the queues have been more than a kilometre long.

The town's supermarket and general store are among 29 businesses visited by a potentially infectious Covid-19 patient, and they are closed this morning for deep cleaning.

The sign on the entrance to Fresh Choice Ruakaka. Photo: RNZ / Katie Todd

The 56-year-old recent returnee had tested negative twice in managed isolation, before embarking on a Northland trip, then becoming symptomatic and testing positive.

"It's a big impact. There only is the one [supermarket] and it serves quite a big area. So there's probably going to be quite a lot of people going without their groceries today."

Residents described their anxiety and anger upon hearing of their town's link to the new case.

While the exact origins of the infection haven't been determined yet John Harris wanted returnees to spend longer in managed isolation.

"This is totally on the government, simply because the quarantine is not secure," he said.

The carpark at a new testing centre in Ruakaka. Photo: RNZ / Katie Todd

"You have to question the government letting people back into the country," he said.

People still on summer holiday, like camper Lynette Smart, have also been caught in the chaos.

She was preparing to bunker down in Ruakaka if need be.

"Hopefully the cases are confined. We just have to wait and see what happens - whether we can go home or get stuck at the campground. Which wouldn't be too bad I suppose, an extended holiday."

A man waiting in line for a Covid test said people were turning around and leaving without being tested because the lines are so long.

Mike Paora said he expects to be waiting for at least six hours, after queuing since before 9am.

He was turned away from one centre earlier and told to go to another.

Paora said people in line are desperate for food and water after not planning on having to wait so long.