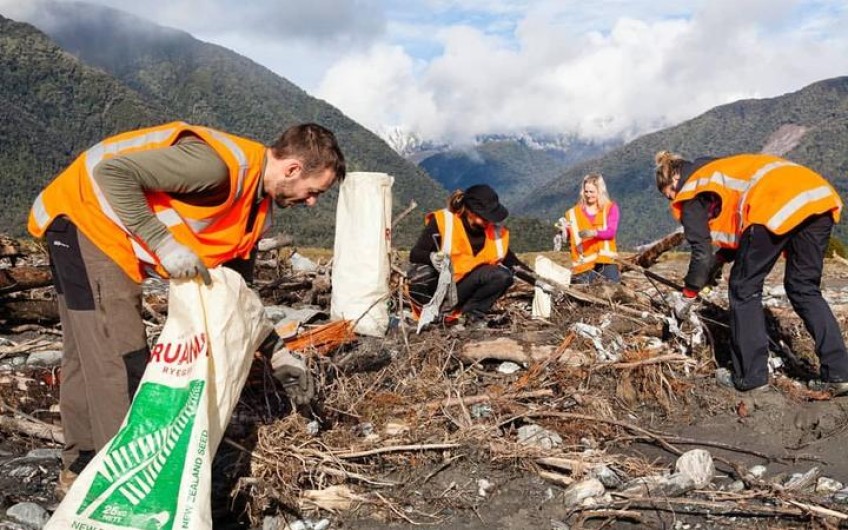 Fox River landfill to be cleared away next week

An old landfill that spewed rubbish along 100 kilometres of West Coast coastlines will be removed.

Cleaners picking up rubbish that spilled out of the old Fox Landfill. Photo: Owen Kilgour

Heavy rainfall and floods opened up the legacy landfill on the banks of the Fox River, in 2019, sending thousands of kilograms of waste along the river through Westland Tai Poutini National Park, and out to beaches and the Tasman Sea.

Cleanup to remove the legacy landfill is to begin next week.

Heavy rain in March 2019 washed out the disused landfill, scattering rubbish downstream through Westland Tai Poutini National Park and into the Tasman Sea.

At the time nearly 1000 volunteers helped with the clean-up.

Rosco Contractors has been hired to remove the old dump completely. Owner Rosco Moore said a few months ago they built a large wall around the dump to secure it.

"We used a 90 tonne digger to build the rock wall - some of the rocks are 100 tonnes each, so that's stopped more rubbish coming away.

"From Monday we will go in, move some of that rock wall, and start removing the 14,000 cubic metres of rubbish," he said.

It will be put onto trucks and moved to a landfill in Hokitika.

"The whole thing will be removed, and then it will be re-filled and planted again."

The government has put $3.3 million into the project from its 'Shovel Ready' grants, designed to help stimulate the Covid-stricken economy, and create work.

The clear up jobs was expected to be finished by the end of March.