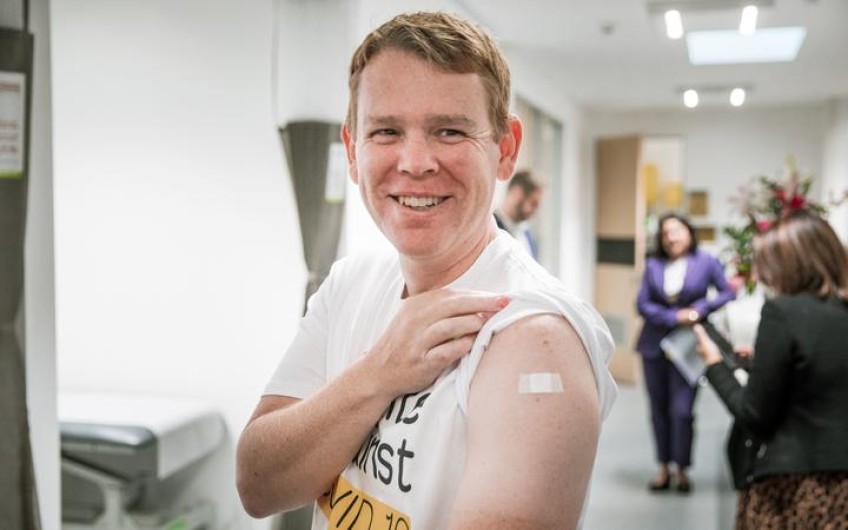 The two ministers received the jab in an effort to publicly reinforce its safety and effectiveness to help combat vaccine hesitancy.

Hipkins said the government asked other leaders of political parties to get vaccinated to help improve public trust in the vaccine.

"We are doing this as a sign of confidence in the vaccination programme."

On why the pair decided to get vaccinated today, Hipkins said the government had to weigh up the public perception of 'Why aren't they getting the vaccine?' i.e is it not safe? vs are government ministers jumping the queue by getting special treatment? He says the public is looking to politicians to show leadership.

He also said he got the vaccination today to try counter the misinformation that was being spread about the vaccine.

"We are working hard to get good impartial, fact-based and health-based information out there so people can make informed decisions."

Hipkins said he knows that the big tech companies such as Google and Facebook are "flagging up" misinformation but that those companies also strike a balance of free speech. He said that's why people should be relying on the information that the Ministry of Health produces.

Verrall said: "We are leading the vaccination campaign, we need to show we have confidence in the vaccine."

Health Minister Andrew Little has clearance to get the vaccine over the next couple of weeks, Hipkins said.

As for Opposition leader Judith Collins getting the vaccine, she told Morning Report she was "absolutely" on board.

"I'll probably get one later this year, unless the government particularly asks me to do so because I would be setting a good example."

Collins said she was not in any of the at-risk categories.

Hipkins said the vaccine rollout was "well through" the border workforce now.

He said families of border workers were starting to receive the vaccine and frontline health workers were also getting vaccinated.

As of midnight Tuesday, 66,296 doses of the Pfizer vaccine had been administered, he said.

About 5,500 were administered yesterday.

Hipkins expects that number to incrementally go up to 7000 - 8000 a day and then maintain that level over the next couple of months before the next big shipments of the vaccine arrive in the country.

Hipkins said daily updates on the number of vaccines administered would start to occur in the near future.

He said the reason daily vaccine updates haven't been happening is because the government wanted to make sure the numbers it was releasing were accurate and that the systems used to record the data were up to scratch.

The daily updates should start from next week, he said.

Earlier this month, the government announced it had purchased enough of the Pfizer-BioNTech Covid-19 vaccine for every New Zealander.

It said that 2 million New Zealanders would get their first vaccination in the next three to four months under the roll-out plan which initially focuses on the most at-risk groups.

In February, Prime Minister Jacinda Ardern said it would take a year to reach all New Zealanders with the vaccine.

Hipkins said as vaccination sites scale up for public administration, delivery services of the vaccine would also be beefed up to make sure the demand was met.

Hipkins said Pfizer indicated that the 'big delivery' of doses to New Zealand was not due until July, although the government had indicated to the company that if it could get the doses to the country faster it would be appreciated.

Hipkins said that the public should expect to see more of these types of events (vaccination media conferences) with role models to show that the vaccine is safe.

On Covid-19 cases, Hipkins said we are seeing "quite a few" cases coming from that Emirates flight from India via the UAE.

He said that was somewhat expected given the high numbers of Covid-19 cases in India and the fact it was a full flight.

There were two or three border cases confirmed overnight but Hipkins said he won't get the final numbers for the last 24 hours until later this morning.

Hipkins said is important that those overseas flights continue coming to New Zealand because they carry a lot of the incoming medical supplies.

On MIQ facilities, Hipkins said the government expects to continue using them until "at least until the end of the year" but that the government is reviewing whether there are any facilities that should be decommissioned or new facilities opened up in other areas.