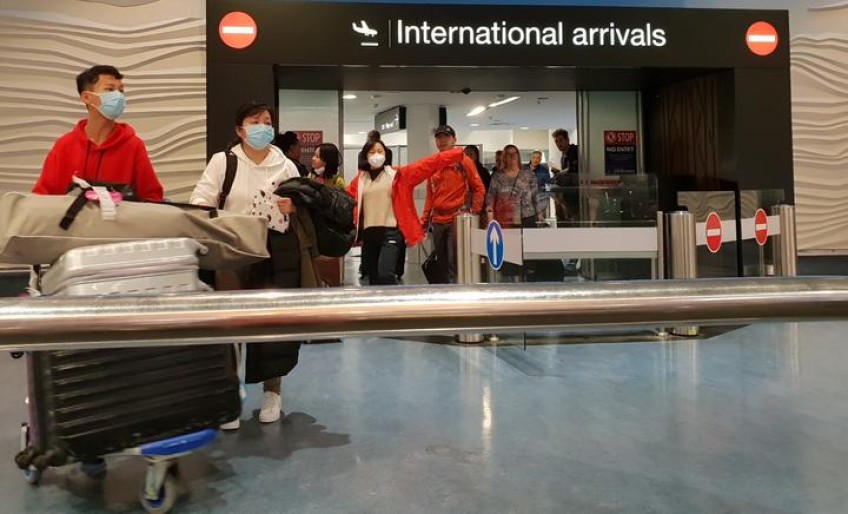 China is calling the New Zealand decision to to bar foreigners who've travelled from or through China from entering New Zealand "disappointing".

As of today all foreign travellers from China are barred from entering the country for up to two weeks. Photo: RNZ / Liu Chen

China's consul general in Auckland, Ruan Ping, says the sudden decision could hurt the superpower's economy - and that would also be bad for New Zealand.

Ruan told Morning Report: "I can tell you that only two days ago, our foreign ministers talked over the phone about the outbreak... Foreign Minister Winston Peters said that New Zealand will maintain normal exchanges and people's flow between the two countries. However, just overnight, the New Zealand changed its mind. And I think the trade ... should be based on normal exchanges of people. (New Zealand) then cut off the normal flow of people and it will kill the economic cooperation. The Chinese people are now isolating the coronavirus, but New Zealand is ... joining efforts to isolate the Chinese economy. That's why I feel very disappointed.

"I think the epidemic will certainly have a impact on the business between the two countries. China is New Zealand's largest trading partner ... as I said before trade should be based on a normal exchange on people. But this sudden travel ban will worsen the current situation. If Chinese economy suffers from international isolation, the New Zealand economy will also be in a loss."

He also commented on the impact on Chinese students coming to New Zealand to study.

"China is New Zealand's largest source of international students. More and more Chinese students have been attracted to New Zealand for its open and friendly environment ... But this travel ban makes the over 20,000 Chinese students difficult to come back to pursue their normal study. It is unfair for them to have these treatments. The Chinese Consulate will pay great importance to the legitimate rights of the students and have been in touch with the universities to find a way out."

However, he said he did not expect China would take any action against New Zealand for its decision.

The minister of health, David Clark, appearing on Morning Report before Ruan, said New Zealand Chinese feedback that he'd seen and received so far had been "entirely positive".

Any criticism from the Chinese consul general would be dealt with by the Ministry of Foreign Affairs, he said.

"We have been really careful to say that this is something we're putting in place as a temporary measure is the evidence is emerging very quickly about this virus. We want to revisit the decision because we are determined that we want things to return to normal as soon as possible."

The border closure means all foreign citizens who've travelled from or through China will be barred from entering the country from today. There are more than 14,500 confirmed cases of novel coronavirus, with many of of them are outside Wuhan.

Coronavirus update: All travellers entering New Zealand will now be required to be individually manually processed (including NZ citizens, permanent residents or their families)and no travellers will be allowed to use eGates.

A little over 300 people have died and 348 have recovered.

There are now 10 countries, including New Zealand, who have denied entry to all foreign visitors who had recently been to China.

The other countries are the US and Australia, Russia, Japan, Pakistan, Iraq, Italy, Indonesia and Singapore.

New Zealand joins the US, Australia, Singapore, Japan and Vietnam in making the move in a bid to stop the spread of the novel coronavirus.

"The advice that we've received (is) indicating a rapidly changing situation with a high degree of uncertainty. We have, as you've noted, the first cases of person to person transmission across countries outside of China, we've had our first death now, outside of China, and the virologists are telling us that the disease itself - as happens with these kinds of things - is mutating and becoming easier to spread.

"Now based on that evidence and in some robust conversations - because we don't take these decisions lightly - We have decided that a precautionary approach is the approach we've wanted to take the whole way through. And the next step in a precautionary approach with this emerging evidence about the virus now spreading potentially a lot more easily meant that we wanted to make sure that we were protecting New Zealanders in this way, by shutting off the main root of its spread from mainland China."

Clark said New Zealand was unique in being isolated but also as a gateway to the Pacific region.

"We've got to factor that into our decision making. The Pacific Islands don't have as elaborate a healthcare system is we do and we know that if if a virus was transmitted through there the consequences could be devastating. So we are being very careful to play a role as a responsible neighbour, and also, of course, working closely with our Australian counterparts and we want free travel between our countries locally so we're also looking to see what they are doing.

"The advice from public health officials is that a precautionary approach is the best approach to take and that this is the next step in protecting New Zealanders in light of the growing evidence - and this is only recent evidence - of the changing nature of the virus."

He said there had been no pressure from Australia or the US to close the border and added that the government was determined ban would be temporary.

"It's there for 14 days and it's is going to be reviewed every 48 hours because we don't want it to be in place any longer than it needs to be. It's supporting what China is doing and the WHO has said that China is doing a very good job of exit screening. We want to strengthen that barrier. And as I say, it's a temporary decision.

Clark said he expected the flight returning New Zealanders from Wuhan to Aotearoa to "come back as soon as the logistics are able to be worked through".

"Our key focus here is the health of New Zealanders, that's our number one priority, but this is a complex and challenging piece of work with the Chinese authorities, with the logistics for the plane, and so on. So it's a matter that foreign affairs is leading on.

A travel agent says the two-week ban on foreign nationals travelling from or through mainland China entering New Zealand will hit the airlines hard.

Brent Thomas from The House of Travel said: "Typically in February - take last year - there were 17,000 who came in from China to New Zealand. They are mainly people who are coming here from a tourism point of view and that may curtail their travels this year, but of course what we don't know is the government is reviewing this (ban) on a 48-hour basis so we don't know if that means they are going to shorten this 14-day period or are they going to lengthen it.

"What we have seen already is they have decreased the number of flights from mainland China and that is likely to continue but we'll have to wait and see exactly what the airline response is, particularly for the Chinese carriers, if they are flying down empty it doesn't make a lot of economic sense for them to continue to do this.

"It certainly has an impact, tourism in New Zealand's next biggest export earner so without that number of people coming in in a crucial month it will certainly make some difference. But also the capacity of an airline is not just about people. If the airlines decide it is not economic to come we're also going to have problems from an export point of view for produce because obviously the cargo hold holds a lot of valuable commodities going out to China as well."