Snow has stopped falling throughout much of the district but many areas are still without power with many schools and businesses closed for the day.

There are reports of power outages in central Queenstown and in Arrowtown, as well as Lake Hayes, Glenorchy and further afield.

"Crews have been working hard in challenging conditions to restore power to parts of the Wakatipu Basin especially the Arrowtown, Frankton and Glenorchy areas following heavy snow in the region.

Power remains out for some customers in parts of Queenstown, Frankton, Arrowtown, Dalefield and Glenorchy.

Power has been restored to nearly 900 customers so far. Power will be restored to remaining customers as quickly as is safely possible.

The safety of the public and response crews is of foremost importance.

Extreme conditions are hampering our response. Crews will need to inspect several kilometres of powerlines to identify and rectify faults and some areas are currently inaccessible or unsafe for response crews to reach."

Queenstown airport is open but has experienced disruption, cancellations and delays to a number of flights. Heavy snow on the Crown Range means that chains need to be carried but the QLDC summit webcam shows that challenging conditions will persist for much of the day. Camper vans stranded on the Crown Range road overnight have now managed to move off the summit. Image: QLDC webcam 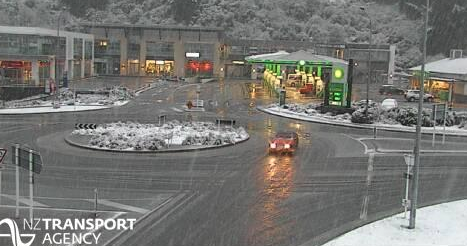 Even though temperatures are near freezing most areas of the Queenstown CBD look clear with wet roads.