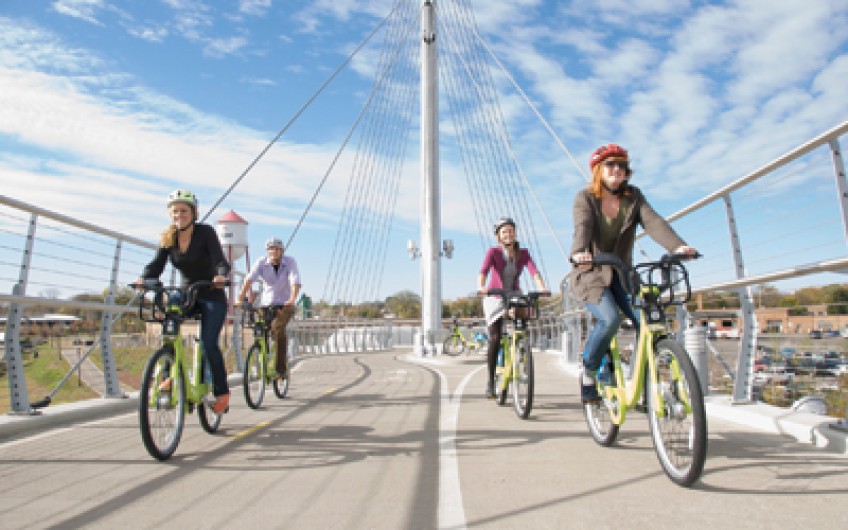 Q'town urban cycle trails - the answer to everything?

An ambitious but extremely cost-effective plan to solve Queenstown's traffic problems is being proposed by the Queenstown Trails Trust.

The Trust already operates the successful network of recreational cycle trails around the Wakatipu basin, but now Trust CEO Mark Williams wants to see the network expand into the CBD and suburbs as an answer to our ever worsening congestion problems.

He's not just talking about simple cycle paths alongside existing roads, but brand new cycle routes involving underpasses, river crossings and new active transport hubs where people can transfer from one transport mode to another. Many of the new routes could be sealed to allow electric bikes used by commuters to travel at speeds of up to 30 or 40 kph.

The master plan for the new cycle trails, including a much improved route to Arrowtown and a cycle route connecting Jacks Point to Frankton.

The ball park cost of the entire plan, not just parts of it, could be around $15 million. That's the cost of two relatively minor pieces of road building; for example the cost of putting sewage pipes under the new Kawarau bridge added to the cost of the new Tucker Beach Road intersection.

Williams reckons that the new urban trail network would be enough to get us out of our cars, especially if matched with a fast ferry service into the CBD from Frankton. He even has an answer for the perennial argument against cycling - cold, wet weather.

"The technology exists now for us to track each cycle journey we make, so that credits can be built up for using public transport when the weather is bad. Good weather trips on bikes would produce credit that can be cashed in to use buses when the weather is no good for cycling."

Williams already has funding and consents in place for parts of the network but to realise the full vision he says the Trust will need public support and more funding from both the local council and central Government.

One of the most exciting aspects of the new network would be not one, but two, new Kawarau River crossings for bikes and pedestrians - one near Remarkables Park and the second near Shotover Country. The trust believes the cost of these new bridges would not only be a fraction of road bridges - under a million dollars each - but also can be subsidised by utility companies that need to find ways to get services like new electricity cables across the river. Detail of the two new Kawarau river crossings that will form part of the new network.

The chances of the entire, visionary plan happening do seem to be promising given that the project already aligns with the Government's active transport strategies and the new extended cycle network could shave quite a few tens of millions from the QLDC's proposed $1 billion spend over the next ten years - much of which is focussed on improving roads that the Trails Trust says we won't need if our behaviour shifts away from the private car.

Mark Williams also makes the observation that it would not be rocket science to steer tourists away from taking their rental cars and campervans into the CBD via the introduction of a simple congestion charge, especially as many visitors don't need a rental vehicle while staying in the CBD.

The new urban trail network would also produce a fresh new way to market Queenstown - "The most cycle friendly alpine resort in the world."

If you would like to kick off support for the new cycle network with a donation - here's the link.