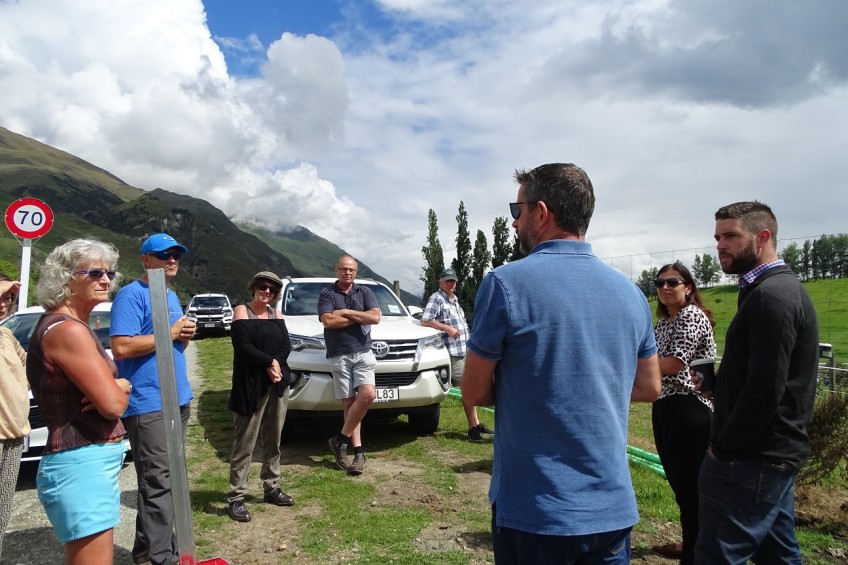 A group of Wanaka residents opposed to an eleven metre Spark cell phone and data tower being erected on Mt Aspiring Road have won the first round with the telecommunications giant in getting them to agree to investigate an alternative site, but they have yet to win the fight.

Work on the tower was halted on November 28th when Barry Bruce parked a digger on the concrete foundations as a last ditch effort to stop the tower being installed across the road from his house at 185 Mt Aspiring Rd. The Spark executive team on site in Wanaka today: From left - Michelle Baguley, Matthew Otley and Kenny Thomson. The protesters' digger blocking the construction site is in the background.

Bruce and other Mt Aspiring Road residents are protesting the fact they were not consulted by Spark about the installation of the 11m tower and they believe Spark did not consider other alternative,  less obtrusive sites.

Spark was granted a certificate of compliance from the Queenstown Lakes District Council and is not required by law to publicly notify residents of the proposed Mt Aspiring Road tower.  Spark New Zealand Lead Corporate Relations Partner Michelle Baguley says, despite claims to the contrary, she has been in regular email and phone contact with Bruce and other Mt Aspiring Rd residents. However, this morning Baguley and two other senior Spark employees agreed to meet residents on the site of the tower in Mt Aspiring Road to answer their questions and negotiate the removal of the digger. Spark's comms boss Michelle Baguley at the Wanaka site today - she has maintained regular phone and email contact with the Wanaka protesters.

Baguley says she “totally understands” the residents’ point of view.  “Nobody likes seeing infrastructure but we can’t provide the services without the infrastructure, it is a delicate balance.”

Spark maintains the 4G tower is needed to meet the rapidly growing demand for mobile network services in Wanaka but resident Peter Bullen doesn’t believe there has been a significant increase in demand anywhere near Mt Aspiring Road.  “You’ve got an established housing subdivision with a stable population, there are no longer concerts at Rippon Vineyard, you have two camp sites with a known peak period and the people  walking up Roys Peak, so it is hard to justify, in our minds, where the increase in call traffic is coming  from.” Up until this year Spark has installed a temporary tower to cater for the peak Christmas New Year period but Spark Head of Radio Access Network Kenny Thomson says that won’t satisfy the demand any more. He says it is not just the increase in the number of users so much as the change in usage patterns.

Thomson says Wanaka is one of Spark’s top three hot spots and they focus a massive amount of attention here.

“We have upgraded all our towers we have here in Wanaka to capacity, the same as in Queenstown, but they can’t handle any more. We build new towers for two reasons,  to create new coverage and to ease capacity pressure on the existing network and we’ve got to the point where we need to ease capacity on the existing network as much as create new coverage.”

Baguley says not only is the tower needed but it must be in that exact location.

“We had five different teams working on this for several months, looking for a site that could give us the coverage we need in the patches where we don’t have cover, and this is that site.”

She said that reports that a Spark employee had contacted the owners of Rippon Vineyard earlier this year to investigate the possibility of a site are not true but suggests it could have been a consultant. Both she and Thomson say a tower on Rippon Vineyard land had been considered and discounted because of radio frequency interference. The Mount Aspiring Road protesters with the digger that is blocking the Spark cell tower construction site.

However, under pressure from the residents this morning, Baguley agreed to consider a list of alternative sites submitted by the residents where the tower could potentially be installed, including vacant land on Rippon Vineyard. She also agreed to meet with two representatives from the residents group to discuss the Spark findings. In the meantime, she said Spark would discuss with the QLDC the possibility of installing a temporary tower until the issue was resolved.

Baguley warned the residents that if no viable alternative site for the new Spark tower was found then the digger would have to be removed immediately and construction allowed to continue, otherwise Spark would take legal action. Spark's new Meadowstone cell tower in Wanaka - won't need replacing, just upgrading in the future. Resident Andrea Hogan has complained to Crux about this tower saying the tower is "an ugly monstrosity" and she asks "Is nothing sacred anymore or is everything now ridden roughshod by corporate greed?"

Baguley says two years ago there was “catastrophic” media coverage up and down the country of Wanaka residents not having any cell phone coverage over the Christmas/New Year period.  She says a commitment was made to the mayor that it would never happen again.

“That’s what we have been talking to him (QLDC Mayor Jim Boult) about over the past few months, we have flagged to him right now there is a risk and we are trying to do our best to mitigate that risk,” she says.

Thomson says Spark is installing 120 to 150 new towers across New Zealand over the next two years and upgrading existing towers.

The Mt Aspiring Road tower is one of two new towers for Wanaka, the second is located at the entrance to the Meadowstone subdivision and beside the Wanaka Croquet club. Both new towers have the capacity to be upgraded if demand increases and there are no plans to install more towers except if a subdivision is built where there is no coverage, Thomson says.

Read: Our first coverage of the Wanaka Protest- Day 1.

Read: Calls for Mayor Jim Boult to get involved in cell tower protest.