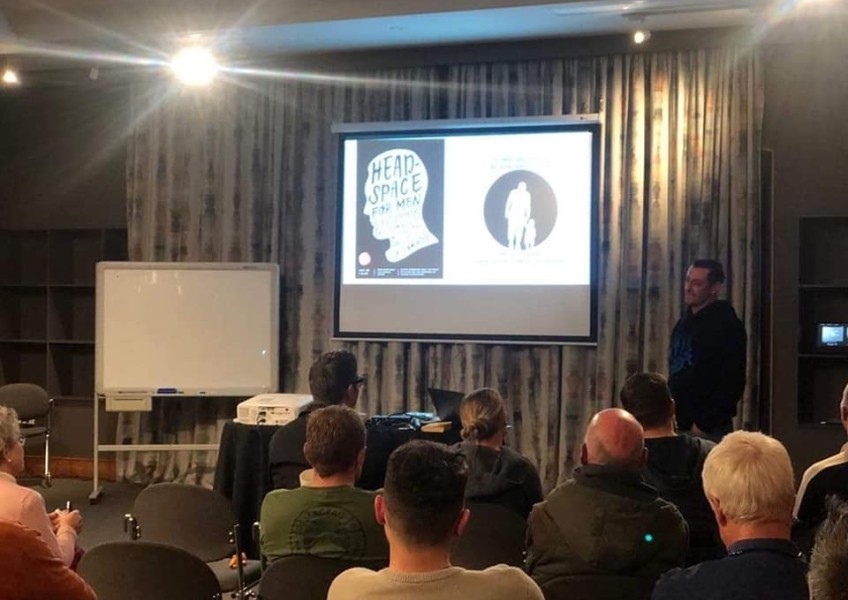 There’s no shortage of talking points within the Wanaka community: airports, snow droughts and town planning, to name a few. There is something that doesn’t get discussed much though, and that’s mental health.

As a country, our chilling rates of suicide and depression have forced the spotlight onto the issue, and Wanaka is not immune. As Community Liaison Officer Ian Henderson says, even in paradise, suicide is a problem. “We see about one a month, and every single one of those is preventable,” says Henderson. For Wanaka teacher Jonathan Homer, it was the lack of openness around this reality that led him to host his first Headspace for Men evening last month. Homer, who, like so many of us, has had his own struggles, says the event was to get men talking about their mental health. “Of course, women suffer as well, and it was open to everyone, but it was aimed at men because we are just so high in the suicide stats,” he says.

There were several speakers, including Constable Henderson and suicide prevention ambassador Scott Weatherall, and Homer says the feedback for the evening was evident of the need for it. “There was a lot of ‘When is the next one happening, how soon can we organise it?”

His aim was both to encourage more open conversations and to raise awareness about the need for them in the community. “As soon as we drop the veil, and look at things for what they are, people will start going, “You know what, we need to do a bit more before stuff happens.” It’s important to give guys the opportunity to talk about what’s happening in their lives.”

This opportunity is exactly what Alexandra Hodge aimed to give both men and women when she started the Wanaka Mental Health Peer Support Group last year. “In Wanaka in particular there seems to be a really deep struggle, and an isolation that exists even though we live in such a beautiful place.”

“I lost a friend to suicide just a couple of months ago and there’s no words for that kind of loss. No one should have to feel that level of aloneness, to get to that place.” Alexandra, who moved to Wanaka from California three years ago, says her greatest hope with the fortnightly Peer Support group is to alleviate that isolation for people. “When I first arrived I was struck by the number of discussions I had with people who were struggling. There seemed to be a mentality of resignation - they weren’t sure what resources were available, or there was a long waiting list or the options were unaffordable.”

“There are a lot of people who have to go to Dunedin for care, and there’s a large gap for them when they come back to fall into.” She’s not the only one to have noticed the growing need for mental health support in the community. Last year, Community Networks started a Community Support Fund, which allows people to access subsidised counselling.

While this reality may bely our town’s idyllic veneer, Homer says it’s not surprising. “Not when you take into account the fact that most people run their own businesses, and are running high mortgages - it’s pretty stressful.”

He says that this is an issue for tradies in particular. In fact, nearly 7% of suicides among working-age males in New Zealand are from the construction industry, more than any other sector, according to a 2016 report by the Suicide Mortality Review Committee.

Ian Henderson puts much of this down to the tough lifestyle. “They’re coming in from other cities and trying to make a living, and for a lot of them they’ve left their family and support networks behind. They work really hard, and they’ve got their own pressures to deal with.”

On top of the lifestyle, though, he says there’s a definite tradie culture. “It’s similar to the rugby culture. I know plenty of tradies that are in a great space and you can sit and have a discussion with them, but for a lot of them it’s that work hard, play hard, she’ll be right, suck it up mentality. They like to let off a bit of steam, but if they’re having problems they just get on with it.” While it may be exaggerated in the tradie sphere, Homer says this attitude is prevalent among men in general.  “Guys don’t generally talk very well about our feelings, that’s just the way it’s been for years, and it comes down to stereotypes. There’s the idea that if you’re mentally unwell you must be a bit off, or a bit weird,” says Homer.

But the definition of masculinity is changing, and Homer thinks it’s now about having an openness, and being comfortable in your own skin. “We’re trying to change the narrative to say, look, everyone can suffer from mental illness, it’s like having a cold. It just means you need some support, you need to be able to talk about what’s going on.”

This support is what Ian Henderson hopes people can offer their mates, and others in the community. “Just say, “Hey look, we’re here for you if you want to talk about it. What are you feeling? Are you thinking about suicide? Do you need some help?” It’s just really good if people can get on board and put that support around their mates.”

It may be that people simply don’t know how to help, and Homer says that, particularly for men, it’s about starting conversations that empower and support. “Guys can put a mask on, but as soon as you start asking, “How’s your day, what’d you do on the weekend, what’s happening at work”, you can eventually ask, “Well, how does that make you feel?” You can even just say that must be really tough. I think most guys understand what stress is.”

Ian Henderson says the main thing if someone is struggling is to engage them, and to instill some hope in them. “Remind them of the good times. If you can, find out if they go mountain biking, or golfing or hunting and make those happen more often.”

He explains that it’s not about ‘fixing the problem’, though, as men tend to want to do. “It’s more about acknowledging it, listening and conveying that sense of hope.”

According to Homer, while services like the Peer Support group are indispensable, there’s plenty we can do as a community to ease the pressure on them. “I take the view that just throwing money at something doesn’t necessarily mean there’s going to be a massive amount of the change. It needs to be a community-led thing, people need to grab hold of the issue and not keep ignoring it or sugar-coating it like we do when something bad happens to someone. We couch it in a different language, but we can all read between the lines.”

Constable Ian Henderson - “Remind them of the good times. If you can, find out if they go mountain biking, or golfing or hunting and make those happen more often.”

“If we can help people well before they’re really ill, then we might help the services a bit. There are some amazing people doing some amazing things within these services, and they’re totally rushed off their feet. But if the community can start helping people out before they need that, that would be amazing.”

Homer says he was lucky, when he was struggling, to have a wife who ‘knows about this stuff’, and that support has been motivation to continue to spread this message. “It’s my only way to say thank you, really, is how can I help?”

“A lot of people don’t have that knowledge, but if they can educate themselves, that would make a big difference. I’m not a professional but it’s not about that - it’s about being a caring human being. As long as you can do that, you’re helping people.”

If you’re struggling or are worried about someone, you can find a list of mental health services in the Upper Clutha region here, on the Community Networks page.

The Wanaka Mental Health Peer Support Group offer a supportive, non-judgmental, and confidential meet up every second Tuesday, 6 - 7pm. If you would like to help, they welcome support of any kind.