A large vegetation fire that has been burning since yesterday at Coronet Peak has been contained, helped by today's cooler, calmer temperatures.

Incident controller Nic McQuillan says firefighters and helicopters have managed to secure the perimeter of the blaze this morning.

The fire at Long Gully on the Skippers Road has burnt an estimated 12 hectares of retired high country farmland, which includes a large area of dead wilding pine trees.

Ground crews are continuing to work on hotspots, supported by two helicopters.

"There is not much visible flame now, but there is a lot of heat in the ground so the crews are working hard to cool things down and reduce the potential for fire to reignite this afternoon when the winds are forecast to rise."

Two fire investigators are also at the scene. 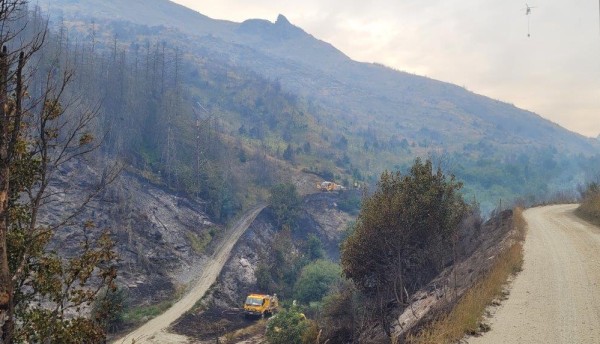 Fire and Emergency is working with the organisers of a mountain bike festival in Queenstown to let mountain bikers know to avoid trails in the area.

The moutainbike trails close to the fire include the Skippers Pack Track, which is affected by the fire, the Coronet Loop below Greengate Saddle, the Pack Track and Sack Trail and Atleys Terrace Track.