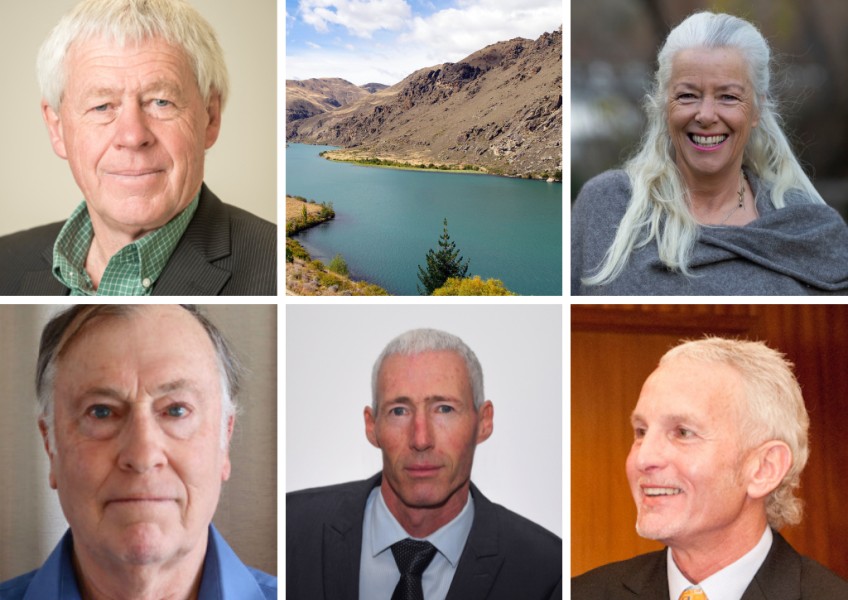 It’s a no-brainer: There’s space for three councillors to represent the Dunstan constituency on the Otago Regional Council.

The three incumbent councillors – Alexa Forbes, Gary Kelliher and Michel Laws have each thrown their hat in the ring for another stint.

That means, one, two or three of the incumbents will be returned to the role.

Mr Lepper reckons it’s been a messy few years for the regional council, dominated by mistrust between elected members and staff, and problematic factions within the council.

His advice for voters: look at the track record of those already around the decision-making table when it comes to choosing who’ll be back.

Mr Lepper was speaking at an event in Cromwell on Monday night, where candidates for local election pitched themselves to voters. 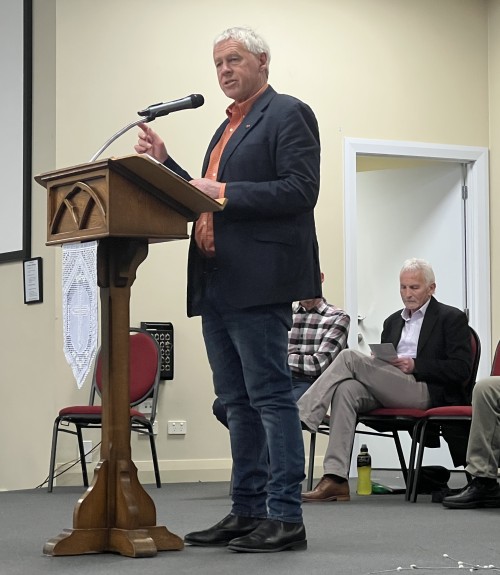 Would-be councillor Tony Lepper had an assignment for voters at Monday's candidates meeting in Cromwell: look at the track record of those already around the decision making table.

“Your three Otago Regional Council representatives have got a really hard job - probably the hardest job in local government politics because they cover 60,000 people in a huge area.”

He’s a former Central Otago District mayor, he runs an irrigation company, he’s just finished a five-year ministerial appointment on the New Zealand Conservation Authority (his last act was getting the planning work for cycle trails on conservation land approved), and he’s ready to get stuck in at the regional council, he says.

“If elected I intend giving up my day job and associated directorships; I would devote my time and energy to my governance work; I  understand water and the vital role that it plays in our lives; I understand conservation and what is required to restore our biodiversity to levels that will support future generations; I have a proven record of working with diverse groups for better outcomes.”

Dr Barker says it's his frustration with the performance of the regional council over the last three years that's pushed him to stand for election.

“The thought that we might end up with the same group of people we've had before, the same inaction, the same problems, the same conflicts within the council.

“So I decided...to put my hand up. However, I think I do have something to offer.”

Dr Barker’s a scientist – he worked at the University of Otago for more than three-and-a-half decades, heading its marine science unit for some of that time.

He says councillors Kelliher and Laws are repeatedly calling for “good science” at the ORC.

“I think I add some skills to the table that may help.”

He was damning of inaction by the regional council on the implementation of the National Policy Statement for Freshwater Management – “I think it’s scandalous, really, that it’s been delayed for so long” – and on a decision on the Manukerekia water flows.

The statement’s already in force nationally, and regional councils must translate it into action on the ground through regional policy statements and plans.

“We are dealing, Gary and I at the moment, with Te Mana o te Wai, which is this whole concept that water has this spiritual value.

“So anything that actually affects the water, in other words, its flow, let's just say an irrigation scheme or a dam, is an actual fact interfering with the wairua or the spiritual value of the water that comes in.

“The cultural changes that have been imposed upon us from Wellington are issues and ideas that we've never ever thought about or discussed before.”

As a councillor, he’s willing to “get on (his) hind legs and say no”, he says.

New land and water policies at a regional level must be “suitable for Central Otago, not what Wellington thinks”, he says.

Both councillors Laws and Kelliher emphasised to the audience they voted against this year’s 18 percent rates increase.

They came on top of a 48 percent rates increase the year previous – “the highest rates rise in the history of New Zealand government” and not “something that council did lightly”, Mr Laws says.

The increases reflect a council that’s “had to run very, very fast to try and catch up with what needed to be done from literally years of neglect” as well as try to implement policies from what is, in his view, an “activist government”.

Since last year’s massive rates hike, the pair say they haven’t seen a sufficient increase in output from the council to justify more spending.

“I voted against large rates rises as I just wasn't happy that they were prudent enough, and I don't cope with asking for savings and being told that ‘we just couldn't find any’.”

Councillor Forbes was absent from the public meeting, and delivered her apologies and a statement via the meeting’s chair.

“There's not much that would have kept me away this evening, but a bout of Covid definitely has,” she says.

Voters may be feeling “grumpy” their rates have gone up by 66 percent in recent years and be wondering what they’re seeing for it.

“Here’s a high-level summary: thirty-five percent is for governement-madated work, including the land and water plan and the regional policy statement.

“The rest is for things I really want, like an Otago lakes plan, waterway restoration, biodiversity enhancement and more monitoring and compliance across everything the regional council does.”

Crux spoke with councillor Forbes after the event, which she says she watched via a live-stream.

She says she disagrees with councillor Law’s take on Te Mana o te Wai and would have addressed his claims if she’d been there in person – she agrees with Mr Barker that the national policy statement should be better implemented by now.

“It’s a clear, six-level framework that outlines how we must manage water. We need to get on with it and not concern ourselves with people’s spiritual relationships.”

Regardless, she’s “absolutely fed up” with resistance to a partnership with mana whenua, she says.

Two mana whenua representatives with full voting rights have been appointed on the ORC’s Strategy and Planning Committee.

“They have absolutely added value.

“Kai Tahu have every right to be around our table – they are our treaty partner.

“We have a responsibility to this partnership.

“All of us will gain from this.”

Meanwhile councillor Laws told the crowd he believes there’s “a kind of constitutional crisis” that’s challenging the democratic principle of “one man, one vote”. 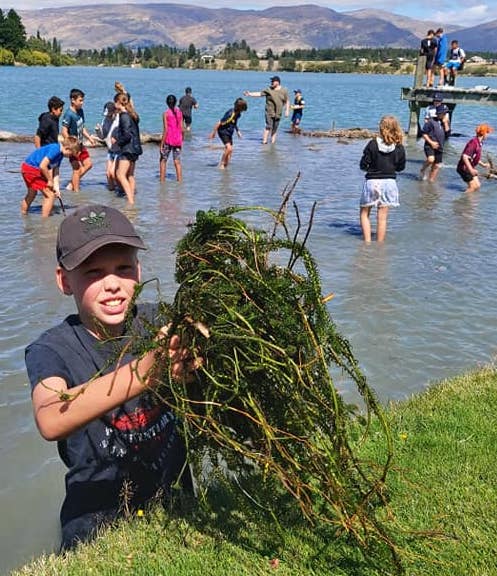 Cromwell school kids clear weed from the edge of Lake Dunstan. ORC candidates differ on the best approach to tackling the invasive lagarosiphon.

Councillor Laws also clashed with Dr Barker, on how to best manage lagarosiphon, an invasive aquatic weed the ORC is attempting to control in Lakes Wānaka and Dunstan, and a pet peeve for users of both lakes.

The audience applauded councillor Laws for his strong stance on continuing to work to stamp out the weed.

“I am passionate in the view that we have got to invest the money to eradicate lagarosiphon...If we get rid of it from Lake Wānaka, and we are making good progress, then we can stop it coming down the Clutha and into Dunston and polluting our lake and ruining our recreational areas.”

Speaking with his science hat on Dr Barker delivered some less palatable news to the audience: “I’m much more pessimistic than Michael that we can eradicate lagarosiphon”.

A tiny bit of the plant is all that is needed for it to spread and trying to wipe it out would be an expensive and fruitless exercise, he says.

“As a scientist, I look at it and I think there is no way you can actually get rid of it.

The current control method of spraying herbicide diquat to control the weed concerns him, he says.

“You just end up with a desert underneath the water – the plant dies, all the invertebrates on the bottom die…I just think it’s a disaster.”

It wasn’t the only opinion Dr Barker delivered through a science lens that differed from a sitting councillor’s.

The ongoing debate on the future of the Manuherikia River was also a source of conflict at the event.

Councillor Kelliher says the delays are “totally the fault of the ORC” having “bought into the misinformation about the river that demands higher flows but cripples the economy”.

He’s just asking for science on “basic hydrology” and “that’s not rocket science”, he says.

“In my mind the ORC in their predetermination have allowed this to become so polarised that the sooner it’s in front of an impartial judge the sooner the facts gets considered and the nonsense stops.”

But Dr Barker says there’s plenty of information there already and a decision should have been made.

“There seems to me to be good evidence that we need to leave at least 2,500 litres per second in the river, but I know the irrigation supporters would like to have 900.”

There’s “some considerable differences of opinion” but, in his view, “every science report that will come out will say exactly the same thing”.

Mr Lepper gave a plug at the meeting to a blog by councillor Forbes on the four and a half hours she'll never get back that he says describes one of the many meetings over the Manuherekia.

At Monday's meeting, Mr Law's defended decision making delays during what he says has been "tumultuous times" at the regional council.

He's had to "fight" to promote "the views of our community in an organisation that is 220 kilometres from here but a whole generation in terms of culture", he says.

Read more: ORC: Who will best represent you?