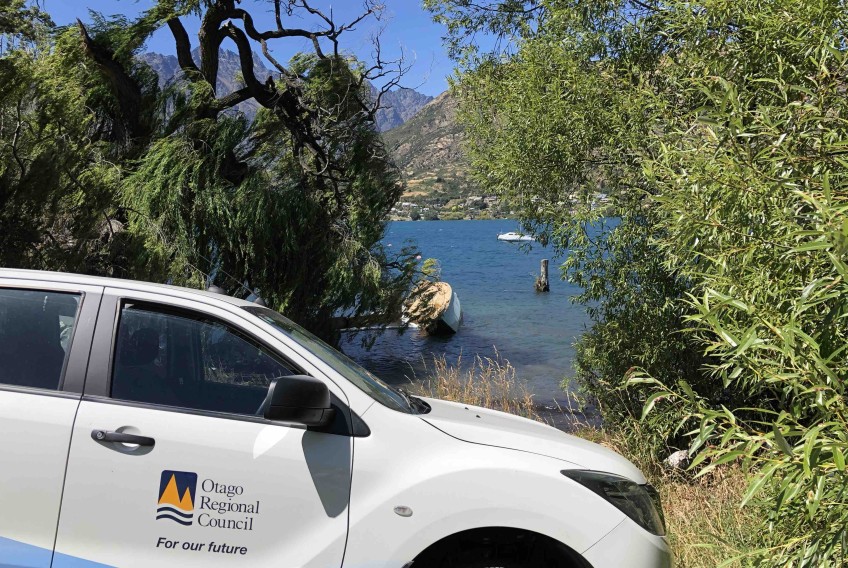 ** Updated. ORC plans to remove the wreck on Friday, February 8th and claims the booms in place around the wreck will contain the fuel spill. See full story below.

An ORC clean up crew visited a boat wreck in Frankton arm today after Crux readers noticed fuel was spilling from the wreck into the lake.

The boat had been there for a week, but there is still a strong fuel smell around the wreck and the water is covered in an oily slick. The original containment boom (background) and the new boom (foreground) installed by the ORC team today.

The ORC team was reluctant to speak with Crux but indicated that the fuel was diesel, and there was no sign of a separate oil leak.

The two man team, who had travelled from the ORC's Alexandra depot, floated a new absorbent boom around one side of the wreck - and then left after around 10 minutes.

The boom is the same design as the one previously put in the water a few days ago and which had shown itself to be ineffective in containing the spill.

The issue surfaced earlier today when a Crux reader took photos of the leaking wreck and another Crux reader, Glenorchy environmentalist Niki Gladding, phoned the ORC direct and challenged them over the lack of action. The diesel oil slick next to the boat wreck - note the white containment boom appears to have little or no effect on the spill.

Gladding spoke with the ORC's senior investigations and enforcement officer, Duane Calvert in Dunedin who later declined to comment to Crux beyond confirming his conversation with Gladding.

As a result of the Crux contact with ORC today many people have commented on social media on the apparent disconnect between QLDC, our local Harbourmaster and the ORC in handling this type of incident.

QLDC's Chief Engineer Ulrich Glasner told Crux that this was an ORC issue and declined to make any further comment. There was no response from Harbourmaster Marty Black.

At the wreck site today Crux videoed a second wrecked boat just metres from the first. The ORC team checked the boat out but it is not clear if that boat is also leaking fuel into the lake.

A separate ORC team was taking water quality readings on Frankton beach this morning, as part of their regular monitoring programme.

At 4.00 pm this afternoon the ORC issued this statement, outlining a plan to remove the boat wreck on Friday this week and claiming that the booms on the water would contain any further diesel leakage. The statement was attributed to Peter Winder, Acting Director Environmental Monitoring and Operations.

“ORC and QLDC responded to this incident 6 days ago. The owners of the vessel were asked to remove it, but have not done so. ORC put in place initial measures to contain the leakage of fuel from the vessel. ORC staff have been on the site again today and have installed additional oil booms to contain any further diesel leakage. No oil was found to be present. It Is expected that the small amount of diesel that has leaked will evaporate from the water surface within the containment area.

ORC is liaising with the QLDC Harbourmaster on the removal of the vessel. We are finalising plans for its removal and expect that will take place on Friday. The removal requires the use of heavy machinery which will need to be brought to the site. It is possible that the boat will break up as it is removed from the water, so the removal needs to be carefully managed to mitigate any further discharge of fuel or other debris.”

Main Image: The ORC clean up team's vehicle at the wreck site earlier this afternoon. The boat wreck is visible in the lake through the trees.