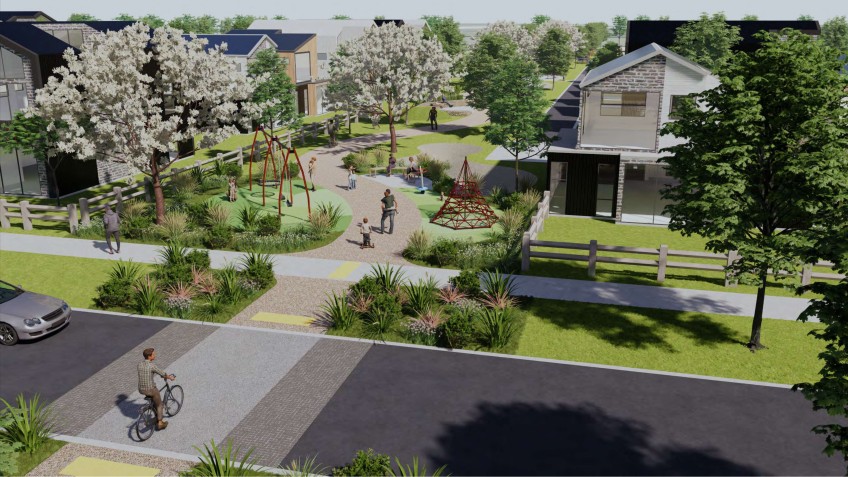 A developer who has proposed hundreds of new homes on Ladies Mile may have hit a stumbling block with the Minister of Transport advising against what he’s calling “ad-hoc” development in the area.

The minister’s comments were made to an expert consenting panel considering the Flint’s Park (East) residential subdivision, which has been fast-tracked under the Government’s Covid-19 recovery legislation.

Transport Minister Michael Wood was one of approximately 20 parties invited to comment on the developer’s plans to build up to 384 residential units, some neighbourhood shops, an early childhood centre and, possibly, a school on 15.6 hectares of land at the base of Slope Hill.

The minister told the decision-making panel he has concerns about the proposal, specifically the “ad-hoc nature of the development and potential for setting a precedent”.

He says the applicant’s own traffic modelling shows Ladies Mile into Queenstown is already at capacity during the morning commuter peak, and more houses will “adversely affect the functionality of the highway”. 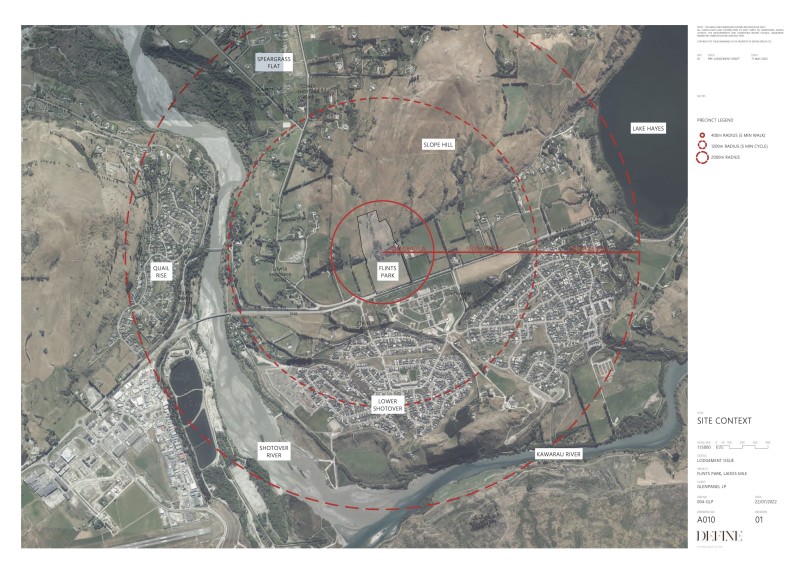 The Flint's Park proposed subdivision on Queenstown's Ladies Mile entrance. More houses along Ladies Mile will mean more people in cars turning out onto the state highway, and that concerns the Minister of Transport (Image EPA website/applicant's documents).

Yet, it’s not the only subdivision along the stretch of state highway to have been given the green light to join the fast-track consent pathway.

Yesterday, another Government minister, the Minister for the Environment, David Parker, announced a neighbouring large housing subdivision proposal from the same developer - Glenpanel Development Limited - will be considered under the legislation.

It’s Flint’s Park West, an adjacent development at 14 Lower Shotover Road, that’s planning for up to 748 new homes (and another possible school).

In his announcement, Minister Parker says “the RMA takes too long and costs too much and hasn’t provided for development or housing where needed”.

But Minister Wood’s comments suggest a need to put the brakes on on Ladies Mile to allow time to make sure development is done right.

He says all three fast-track proposals for the area (he’s including the Queenstown Lakes District-led Materplan for the Te Pūtahi Ladies Mile, which the council is now seeking to notify using a streamlined planning process) need to be considered “in parallel to ensure integration and address cumulative imapcts”.

It’s a no-brainer for members of the Threepwood Farm Residents Association, who were also invited to comment on the Flint’s Park (East) application.

Writing on behalf of 42 property owners, Karen Ramsay says allowing the developer to “jump the gun” and bypass the council’s own masterplan process “makes little sense and would set a precedent for others to commence ad-hoc and unplanned development” along Ladies Mile.

The residents association says its members’ views are reflective of those of plenty of others who live in the basin: they’re not in favour of high-density development in that spot, but they get that Queenstown will continue to grow and it’s needed.

The QLDC’s earmarked Ladies Mile as a prime spot to house the district’s inevitable future growth, as long as transport issues are ironed out. 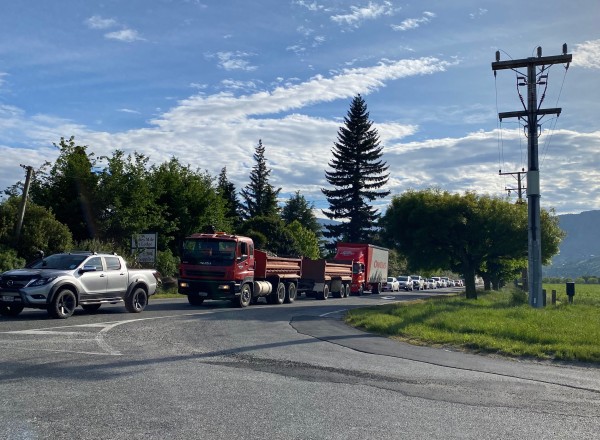 In recent years, it’s developed a masterplan for how that development should go – thinking through things like how people will get from a to b, where their water will come from and waste and storm water will go, and where schools, parks and community centres can fit in.

When put to locals, 86 percent of them opposed the masterplan, with most citing traffic congestion as their main reason for opposing it.

The council unanimously voted to adopt the final masterplan in July.

Earlier, then Mayor Jim Boult had said it would be “naïve” to think development could be stopped along the strip. In adopting the masterplan, the council acknowledged it “is far better to be holding the steering wheel, so to speak, here, rather than letting ad-hoc development take place”.

However, fast-forward three months or so and the masterplan is not yet operative, as the expert consenting panel considers multiple residential subdivision proposals on Ladies Mile.

Speaking to Crux, QLDC planning and development boss Tony Avery says the masterplan “doesn’t yet have any statutory weight”.

The council is applying to the Minister of the Environment to have the masterplan incorporated into the Proposed District Plan asap, bypassing regular processes for getting this done.

Regardless, Mr Avery says the council’s assessed the Flint’s Park (East) fast-track application in terms of its compliance with it.

But, how much weight is given to the planning document, years in the making, with input from a range of stakeholders, including local businesses, developers, iwi, community groups and members of the public, is now out of the hands of the council.

“Council cannot dictate what the panel considers (our standing is similar to an affected party) but naturally we have been conscious of providing comments on matters we’d like it to consider,” Mr Avery says.

In the council’s submission to the panel, Mr Avery says the Flint’s Park subdivision “has the potential to deliver significant long-term benefits” for the district in that it will deliver much-needed housing “in a shortened timeframe”.

But this needs to be balanced against the need to establish “a well-functioning, integrated urban environment” across the wider Ladies Mile land, he says.

The council’s submission also raises concerns about some proposed “super lots” within the developer’s application.

Mr Avery says the super lots “allow for uncertainty” around how the development “will progress, how it will be developed and by whom”.

Simply, using Mr Boult’s analogy, the council will continue to take a backseat on development of the lots moving forward, their hands clearly not on the “steering wheel”. 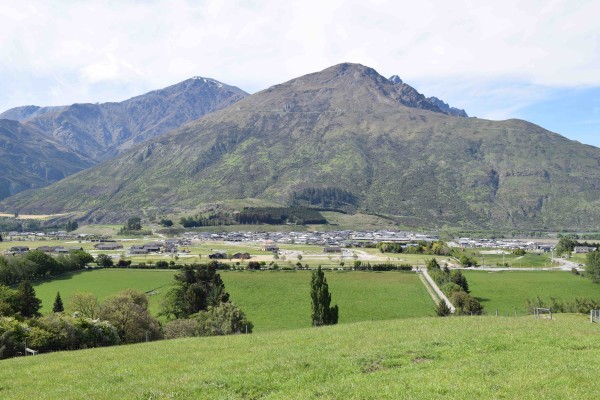 It's largely rural now, but land adjacent to Ladies Mile is flagged for development. But how does the community secure its goal of 'density done well'?

Whether the intent of the masterplan – “to do density well” - will be realised will be up to the developer, if its fast-tracked consent gets go-ahead from the panel.

There’s already obvious niggly points in the plans: The developer has proposed a revamp of the Glenpanel Homestead, and visitor accommodation is anticipated – a “non-complying activity” in the zone in the masterplan (and remember this was adopted unanimously by council after extensive community consultation); plus, the developer’s asking for 17-metre-high buildings – more than double that anticipated in the masterplan.

The QLDC is working with Waka Kotahi and the Otago Regional Council to collaboratively nut out Ladies Mile's traffic bottlenecks, and that's even before the residents of the proposed thousands of new homes allowed for in the masterplan are thrown into the mix.

There's a chunk of taxpayer money - more than one-hundred-million - being invested in local roads through the Government’s NZ Upgrade Programme (NZUP).

In response to questions from Crux this week, Waka Kotahi's principal transport planner Tony Sizemore says 18 new traffic signals will be installed across the entire NZUP programme from Hardware Lane to Humphrey Street on State Highway 6 and from the State Highway 6/6A intersection to Oaks Club on State Highway 6A.

It's opting for traffic lights to "ensure everyone, including pedestrians and cyclists, is given opportunities to cross or turn on to the highway", he says.

"On SH6A the sequencing of signals can be controlled to provide gaps to cross but also to provide coordinated green lights at the intersections to allow for more reliable trips along the road without substantial delay, in particular for buses."

The national funding does allow for the "prioritisation of bus travel to improve levels of service for public transport". But there'll be benefits for everyone on the roads too: "While it is not specifically aimed at increasing road capacity for single occupant vehicles there will be improvements at existing pinch points for all road users," he says.

Alongside the Minister of Transport, Waka Kotahi was also invited by the Flint's Park decision-making panel to offer comment on the developer's proposal.

Its comments echo those of the minister, saying it "has concerns regarding the potential impacts" of the subdivision, and the Ladies Mile masterplan in general, on the capacity of the state highway.

Its message for the decision-making panel is one just as relevant for locals: "...to maintain the functionality of the highway and manage the effects of ongoing development, mode shift at an unprecedented level is necessary".

The transport agency says a "concerted approach to provide infrastructure" to entice people out of private cars and into and onto other transport modes is needed.