A Cromwell teen at the helm of a thriving lawn mowing business has been served a very adult lesson that will potentially set him back at least $25,000 a year.

Johnny O’Neill, the unexpected owner and operations manager of J.C. O'Neill Contracting, a landscaping and mowing service, has been ordered by police to stop driving his ride-on lawn mower on roads, greenways and footpaths. 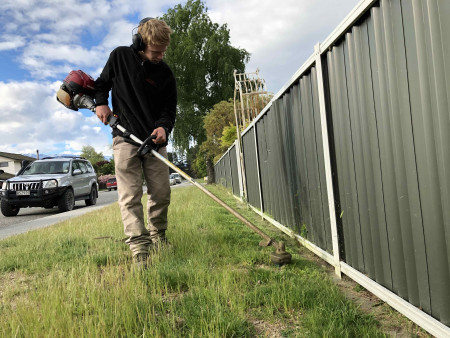 Up until then, it was common to see 14-year-old Johnny around town, getting from one job to the next on his mower, a trailer of lawn clippings, a weedwhacker and other industry bits and bobs in tow. Outside of school hours, anyway.

Despite employing three adult staff, having purchased a work vehicle and keeping the yards of 295 clients shipshape, Johnny’s still a few years off qualifying for a driver’s licence.

He says he received a call from police in recent weeks, telling him to come down to the station for a chat.

They’d received a complaint from a concerned member of the public, via NZTA, regarding Johnny and his mower, he says.

“I reckon whoever it was who decided to complain to the NZTA should have to front up."

“I have a health and safety policy, and I consider it to be one of the better ones. It’s all about having an efficient business."

“And everyone I talk to about it says I’m probably one of the more competent drivers they’ve seen."

“Summerland (truck) drivers who pass me on McNulty (Rd) say they don’t even cross the centre line when they pass me. It’s no different to having a parked car on the side of the road.”

Regardless, the end result: Keep off the road, greenways and footpaths – it’s not allowed, police have instructed. 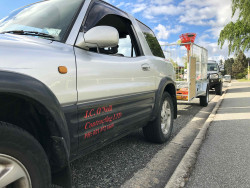 Johnny reckons he hasn’t been flouting the law. To his mind, the ride-on mower was an agricultural vehicle, and kids on farms ride quads and the like.

However, although unable to comment on Johnny’s specific case because of privacy reasons, police have responded to questions from Crux, saying ride-on mowers meet the definition of a motor vehicle, which means they must be registered.

And, young Johnny needs a licence to drive them, a fact he’s resigned to now, although it’s not good for business.

“That’s the way it is. No point arguing about it. It’s the law. You can give it a good nudge, but the chances of winning are pretty slim.”

The enterprising Cromwell College pupil, who works 50 to 60-hour weeks in addition to school, has lost his independence.

He’s going to have to stump up $25,000 in extra staff costs annually to pay someone to drive him from job to job. Plus, he’ll be looking to buy a second vehicle for the business, and a “decent ute” might set him back another $10,000, he says.

“It’s just another hiccup in the road. If there’s a problem, can we fix it? Yes. No? Then live with it. Why worry? It’s not going to achieve anything."

“Say you’re 80, losing your licence, it’s absolutely devastating for them. It’s exactly like that, except I’m going to get it back in another two years.” 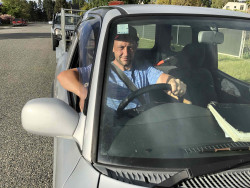 When Crux caught up with Johnny on the job this week, he was accompanied by new employee Richard Thurlow, tasked with chauffeuring round his young boss, on that shift anyway.

Richard says he was surprised when he first laid eyes on Johnny.

His take on proceedings: “I reckon it’s pretty stink. They should have left him alone. I know what I was doing at 14, and it wasn’t that.”