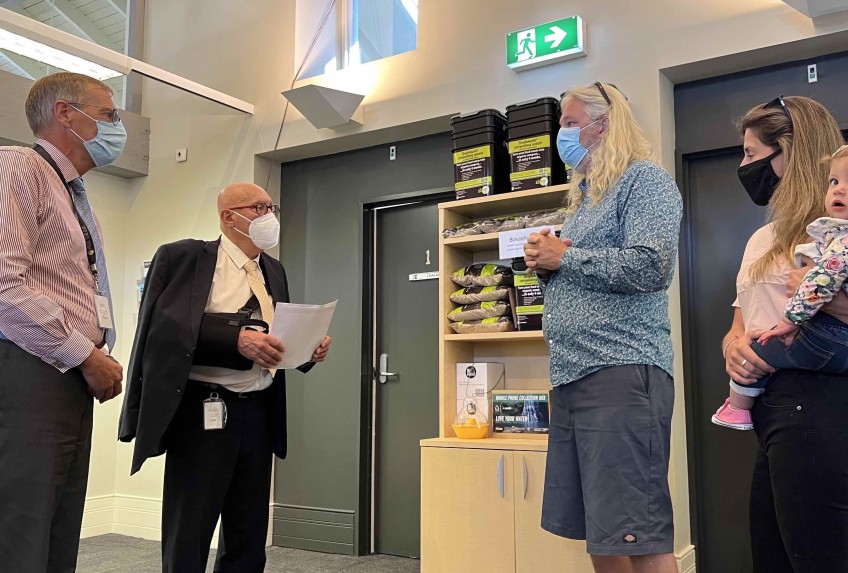 A letter calling on Queenstown Lakes District Council to revisit its no-vax, no-entry policy for sports, recreation, and library facilities has been delivered to decision-makers.

Approximately 80 more supporters met at the Queenstown Recreation Ground prior to the letter delivery, before making their way to the entrance of the council building.

Craig Smith and his supporters outside the QLDC building today.

Although there is no vaccine requirement to enter council offices, restrictions on gathering sizes did prevent the crowd from entering the council building itself.

Mr Craig addressed supporters saying it wasn't the time to get into a debate with council representatives or shout things out.

The letter, written by lawyers at Todd and Walker Law on behalf of Mr Smith, is asking QLDC to revisit its decision in relation to the vaccine mandate.

“Not only does the mandate have an adverse effect on those who are unvaccinated and older than twelve years and three months, but the children and grandchildren of those individuals too.

“This is particularly the case where supervision is required for young children to use QLDC facilities,” the letter says.

In December, QLDC introduced a policy requiring people aged 12 and older visiting many QLDC-staffed facilities to be fully vaccinated and wear a mask on entry.

At the time, QLDC chief executive Mike Theelan said it was not a decision taken lightly.

However, Mr Smith says he has concerns QLDC’s process in reaching the decision to mandate wasn’t robust enough.

It included a verbal, non-documented risk assessment, lack of appropriate consultation and lack of expert advice, and it didn’t compare to the process undertaken by other councils in the region when making similar decisions, he says.

His lawyer’s letter is asking QLDC to undertake a “proper” risk assessment “with appropriate documentation, consultation, and expert advice”, and the process should be “open and transparent”.

An online poll initiated by Mr Smith yesterday evening, asking whether QLDC should drop the vaccination requirements, has had 706 respondents, 97.2 percent of them in favour of ditching the policy (as at 11am, Thursday).

Votes are only valid if they come from respondents able to list an address within the Queenstown-Lakes district, Mr Smith says.

She’s a spokesperson for more than 100 families affected by QLDC’s vaccination mandate.

“A lot of people in Queenstown are transient. They have no family support. The ability to access community facilities provides opportunities to make new friends.”

A group of young families gather on Thursday afternoons at Frankton Beach for swimming lessons in the lake as the vaccination policy means they’re no longer able to attend lessons at council-run pools, she says.