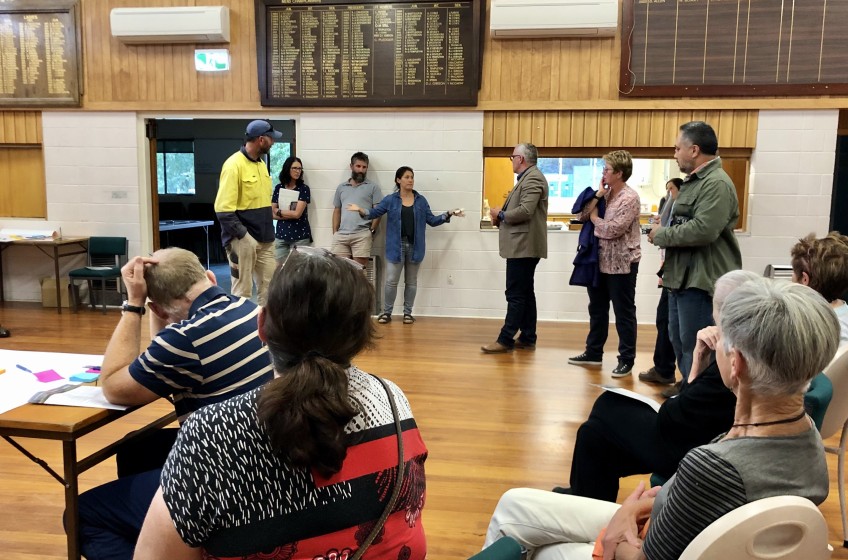 A carefully-curated “community drop-in session” by Christchurch Airport was derailed on Wednesday night by disgruntled Tarras locals asking some unscripted and challenging questions.

Christchurch Airport (Christchurch International Airport Ltd - CIAL)  had set up glossy information boards featuring slick graphics and photos of the area’s scenic landscapes which displayed "feedback" it had received from the community, at Tarras Community Hall. 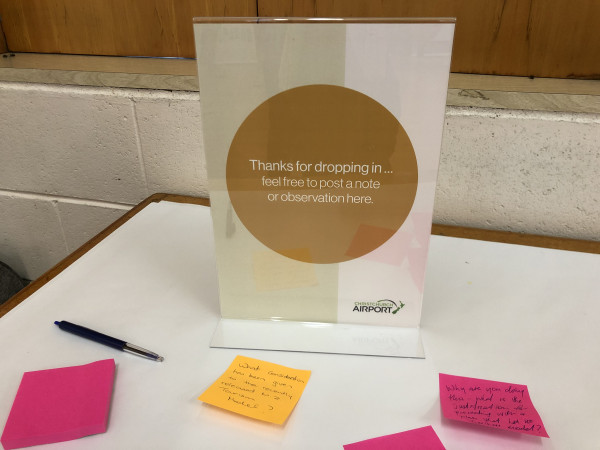 Tarras locals were invited to leave a post-it note.

There were also post-it notes where locals were invited to leave their observations, and some proposed timelines and the rationale behind CIAL wanting to build an international airport in Tarras.

There were no chairs set up - and the scene was set up for residents to look, perhaps have a quiet discussion - and then leave.

CIAL communications manager Yvonne Densem told Crux the intention was never to have a traditional Q & A town hall style meeting, and that in fact the feedback they’d received from the community was that such an environment was too confronting.

When Crux asked if the Tarras Airport project manager Michael Singleton would take questions in front of the group, Densem said he wouldn’t.

However, locals arriving to the hall clearly expected their concerns to be addressed in a group setting, and the Christchurch Airport team was soon forced to abandon their set-piece display and front up to Tarras resident's concerns.

The questions ranged from how CIAL planned to address the climate impacts of pre-COVID levels of commercial aviation, to why such a large scale, significant project - partly funded by Christchurch ratepayers - wasn’t being built in Christchurch, a city anxious to host all the tourist trafffic it could find.

A common thread was that CIAL hadn’t been in touch with Tarras residents affected by the proposal, and doubts were raised over whether the company had a fully developed business plan or if Tarras Airport was simply a $40 million gamble.

Locals Stephanie Zefferino and Richard Hart are a young couple who bought a house directly opposite the proposed airport site.

“You said in January we’d have some idea of where this runway’s going to go, but we still have no idea,” she said as the group of roughly 30 locals watched on.

“It’s not really fair to keep coming, wasting our time, no offence, but everybody’s time is precious - give us some information.”

Singleton replied that he understood her situation and that there were things CIAL "still needed to get done".

Later Zefferino told Crux the evening had been “very disappointing.”

“All our capital is tied up in this property with no insight from this organisation that’s come in and pretty much hijacked the beautiful town we live in.”

Like many of the attendees, Zefferino was politely appreciative of Christchurch Airport's gesture of engagement, but felt they weren’t really being heard.

“One lady was asking ‘is there an option for no airport’, but they seemed to disregard that point completely.

"This seems to be another exercise to tick the boxes.”

Warren Bachelor, a Tarras resident of 15 years, said to Singleton of the information posters, “I read all this stuff here and I might be a little bit impaired or something, but I don’t understand why you’re doing this.”

Singleton replied that "in this part of the world there is a shortage of aviation capacity for the demand we expect to see in the future."

Bachelor told Crux the project was “entirely about making money” and CIAL were just doing their job, but he believed nothing that was said by locals would be taken onboard.

“One of the reasons I live here is for the peace and quiet, and now for me more than ever - I have a brain tumour - peace and quiet for me, I just have to have it.

“I’ll go home from this tonight and I’ll absolutely collapse.” 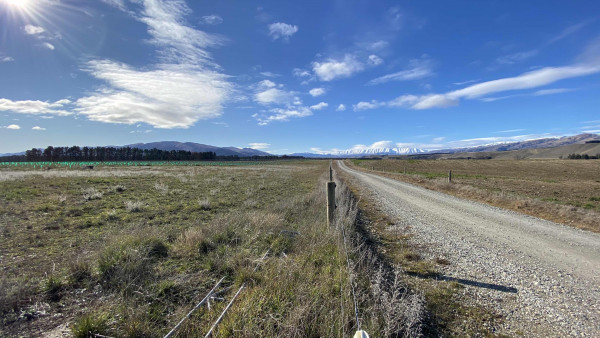 What's at stake - the site of the proposed Tarras International airport

Bachelor says he understands why people would support  the airport idea, but he thinks the proposal should be viewed more widely by the country in terms of quality of life and well-being.

“Making money in a more sustainable way, not at the expense of the well-being of our New Zealand society.”

When questions finally wrapped up after just under an hour, Crux asked Singleton how he thought the meeting went.

He said the opposing views represented a portion of the people who’d attended the drop-in sessions.

“That was one engagement we’ve had over the last two days. We’ve seen over a hundred people come through this hall and they've expressed a range of views,” he said.

He says there is a "lot of support" for the proposal in the community, with as many in favour as opposed, but a larger portion was on the fence.

He said the overarching request was to hear more detailed information, but that would take “some time.” 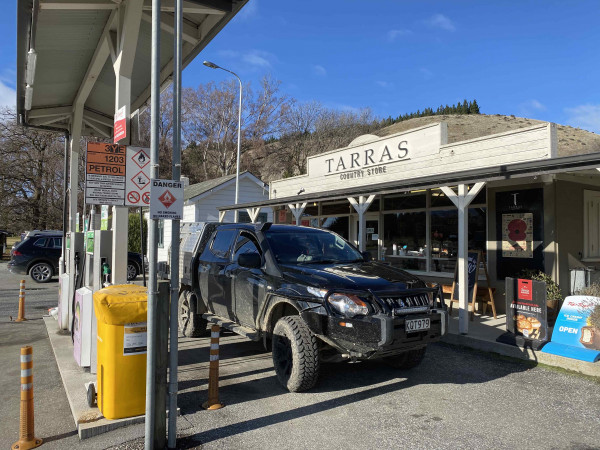 Tarras - a tiny town in the middle of nowhere.

He denied the drop-in style was designed to defuse people’s frustration and avoid conflict.

“Our view was this was a good way of relaying feedback, you there was a chance for people to see some of things they had said to us.

“What we hear consistently from a number of people is that they want to be able to have a one-on-one conversation rather than a town hall type style session where often those quieter voices are drowned out.”

Queenstown Mayor Jim Boult and the Queenstown Airport Corporation  (QAC) have recently made their view clear, that the CIAL Tarras project is competitive and not welcome. QAC is 25% owned by Auckland International Airport Limited and 75% by Queenstown ratepayers.

CIAL is 75% owned by Christchurch ratepayers and 25% by the NZ Government.