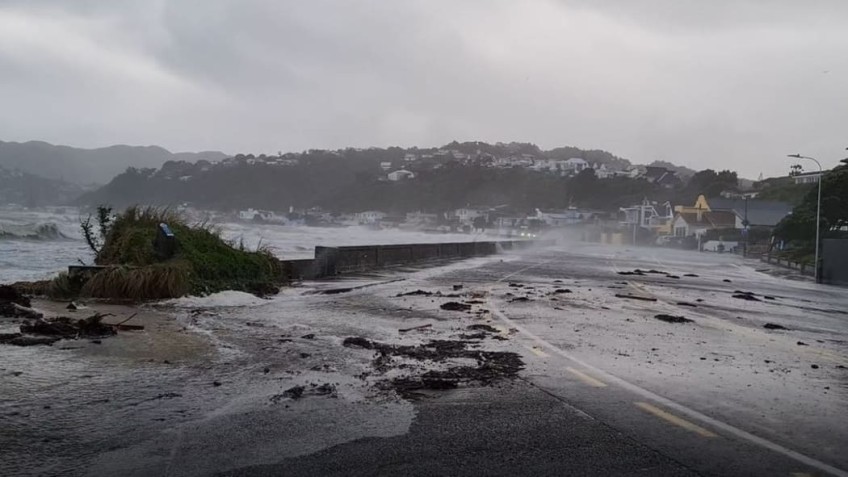 Stormy weather is continuing in much of the country with strong winds and heavy rain, while snow has closed roads in the south.

In the Kāpiti Coast town of Waikanae, hit by two tornadoes last night, The fence on Paul Knighton's property on the corner of Queens Road and Barrett Drive was destroyed, and this morning his father-in-law was chainsawing trees to try clear the path.

Large swells were bringing waves and coastal debris up onto the road in the Porirua suburb of Plimmerton on Monday morning.

Philippa Sargent was out trying to clear a flooded drain with a shovel near her waterfront home. She said it was the worst in the time she had been been living there, with stones being thrown up over the boat ramp as waves crashed up over the sea wall.

"Today will be a really bad day weather-wise across much of the motu, things start to improve tomorrow," NIWA meteorologist Chris Brandolino told Morning Report.

The upper South Island saw the most active weather of the deep low sweeping over the country on Monday morning.

Snow was expected to fall to low levels across the South Island, with hail possible elsewhere.

"Today's going to be a really active day, I know we had some active weather pretty much the past several days and I think that's what's separated this winter weather system from ones we typically get every year - just the longevity."

MetService recorded more than 100,000 lightning strikes in just under a week to Monday morning.

The stormy weather had been "stuck" in central New Zealand, Philip Duncan from WeatherWatch said, with the lower North Island hit by downpours over and over again.

While thunderstorms, gales and downpours were hitting the same areas on Monday, conditions should gradually ease in the Wellington region, and milder westerlies are due to return from Wednesday, he said.

Auckland could be in for wind exceeding 100km/h, with the strongest gusts between 9am and 3pm, bringing isolated power cuts, while the Desert Road was likely to get flurries of snow and extreme caution was advised.

Early next week there could be a low that would give the upper North Island a round of very active weather, Brandolino said.

Speed restrictions were in place on the Auckland Harbour Bridge, and Waka Kotahi was advising drivers in high sided vehicles and motorcyclists to use the alternative SH16 and SH18.

Slips and flooding were expected on many roads across the country.

"The warning is general right across New Zealand but certainly the central North Island has really been hammered with these thunderstorms, a lot of rain, high winds, so there's debris down, there's branches down.

"We advise people travelling to take extra care, be prepared to stop - you might come across something that's unexpected where something's fallen down on the road."

The tornadoes in Waikanae in Sunday were just days after a tornado damaged six houses in the lower North Island town.

Sez Rudd saw the first tornado coming towards her as she drove along Rutherford Drive on Sunday afternoon. She said it was as wide as the two-laned road, and she pulled her car over and braced herself inside it. When she opened her eyes she saw two large trees had fallen about 2m in front of her vehicle.

A tree fell on a power line, cutting power to almost 200 households in the Reikorangi area of Kāpiti Coast on Sunday, and more than 1000 properties in Taranaki lost power as wild weather crossed the country.

On Monday morning, several hundred homes remained without power in Taranaki, while almost 600 homes had no power in Kāpiti and Horowhenua. Power was out at forty homes in Te Puke.

Aotearoa was hit by more than 9000 lightning strikes on Sunday night.

Porirua mayor Anita Baker told First Up the rain in the district was "torrential" on Sunday and there was more heavy rain about 3am on Monday before it started to ease.

At at least three homes were flooded, but many more properties had flooded gardens, sheds and garages. Paremata School was closed on Monday.

Paekakariki Hill road north of Wellington was closed by a slip, and flooding shut SH1 at Marton on Monday. There was a slip in the upper Buller Gorge on SH6.

MetService issued a severe thunderstorm watch for Waikato, Waitomo, Taranaki, Wanganui, Manawatu, Tararua, Kapiti-Horowhenua and Wairarapa in the North Island and Nelson, Buller, Westland and the Canterbury high country, for most of Monday.

The wild weather has made it tough for Horowhenua farmer Richard McIntyre to milk his cows.

McIntyre who is the Federated Farmers Dairy Industry Group vice chair found a number of trees downed on his property on the route cows would usually take to the milking shed.

He said they had to trek through a number of other paddocks and gates instead.

He said after the weather overnight, it was not a shock and he has been checking all of his stock were well fed and safe.

McIntyre said he was glad all his building's roofs have stayed on and that there appeared to be no other damage.

Trees have toppled over during wild weather in Horowhenua. Photo: Supplied / Richard McIntyre

In the South Island, snow closed all the major alpine passes - Lewis, Lindis, Haast and Burkes and Arthurs - and SH94 from Te Anau to Milford was still snow-bound. In the Upper Buller Gorge, a slip had come down closing SH6 from 8 Mile to Inangahua.

The lower South Island was in for wintry weather at the end of the week - and more snow on the ski fields, Duncan said.

A strong west to northwest flow over New Zealand that is bringing heavy rain, strong winds and snow to parts of the country should change to strong southwesterly from the south during Monday, MetService says. It is forecasting the weather will settle from Wednesday.

Primary schools in Wanaka and Hawea have closed due to the conditions, as temperatures in parts of the region were forecast to hit -3C.

Cardrona Ski Field opened briefly on Saturday but since closed because of the weather.

General manager of experience Laura Hedley was expecting the ski fields to open again on Tuesday.

"There's more snow at this time of year than I've seen in a long time. We had 60cm down at our very bottom and more like 70 up top - it's a pretty good start.

"It's definitely very cold out there at the moment so our grooming team will be out there packing it to make sure it stays."

The road to the ski fields was down to one lane, Hedley said a crew was working to get it back to two.

"We haven't seen that much snow on our road for a while but we've got a great crew up there."