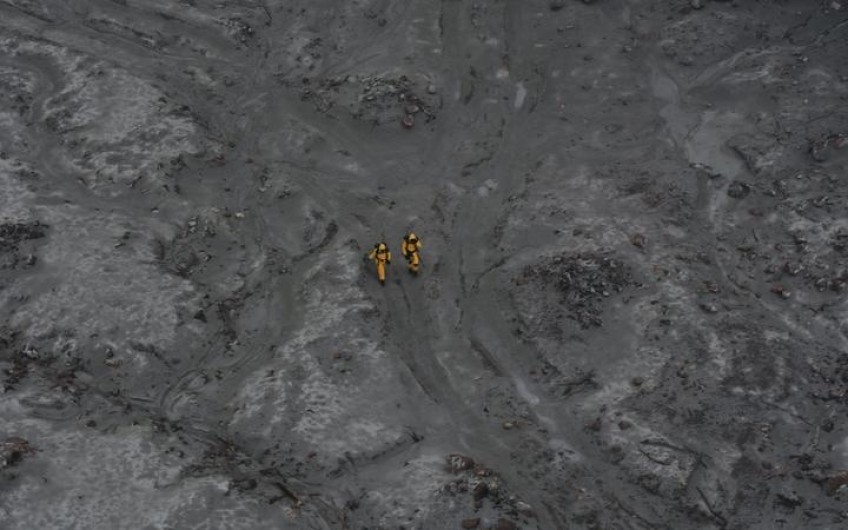 Whakaari / White Island eruption: 'It's not over yet' - police

Police have deployed the dive squad into the waters around Whakaari / White Island as they seek to recover the bodies of the final two victims of Monday's eruption.

Further aerial searches will also be carried out this afternoon.

Six bodies have been recovered after a team worked on Whakaari / White Island for four hours today. They are being moved from HMNZS Wellington to the airport.

They will be placed in coffins, then hearses and whānau will receive them before they are transported to Auckland later this evening.

Speaking at a press conference this afternoon, police commissioner Mike Bush said at least one of the remaining two bodies could be in the water surrounding the island.

He said it had been a "traumatic and harrowing event" for the Whakatāne community and particularly for the friends, family and whānau of those directly affected.

The operation - which started at 8am today - went to plan, Bush said. He recognised the expertise of NZDF personnel and other emergency staff who were able carry out the operation.

"It's not over yet. The operation was not without risk."

Bush said he's hopeful all of the bodies can be identified, but he can't absolutely guarantee it.

There are two possible locations for the two remaining bodies, he said.

"We do believe that at least one of them is in the water, and the other one we are unsure, so that only leaves two possibilities, one is still on the island and we haven't located them, or they too are in the water."

He assured family and whānau of the remaining missing two people that they will put every effort into locating them.

Bush said there might be a need to return to the island at some point to obtain further evidence. But he said it's quite likely that there will be enough forensic evidence with what's available now for the Coroner.

The circumstances were unpredictable and challenging, Bush said. He praised the courage of those involved.

Deputy police commissioner Wally Haumaha said the last two families would not be forgotten and everything possible will be done and nothing will be left to chance.

Follow RNZ's live blog for the latest Whakaari / White Island eruption: how it unfolded Recovery mission: 'we have a plan' The beauty and the menace of Whakaari

Members of the Defence Force's bomb disposal squad and army medics made up the recovery team that located six bodies on Whakaari - White Island today.

The recovery team of eight - six men and two women - spent four hours on the island during the operation.

"We cannot downplay the risk involved in this operation," he said, acknowledging the efforts of all those involved.

He said the conditions were difficult and given the potential for another eruption they had planned how to recover the six identified deceased, while minimising the time rescuers spent on the island due to the risks.

Regular testing was done to ensure gas levels on the volcano weren't too high, he said.

Colonial McKinstry said they used maps to identify the rough locations of six of the bodies.

He said their thoughts are with the victims and whānau and they recognised the imperative to treat everyone and the space at all times with dignity and respect.

They also maintained communication with GNS for updates on the activity of the volcano.

Those who went on were from the Explosive Ordnance Disposal Operator team, he said. "That's what they exist and are trained for."

Colonel McKinstry acknowledged that the recovery operation is ongoing.