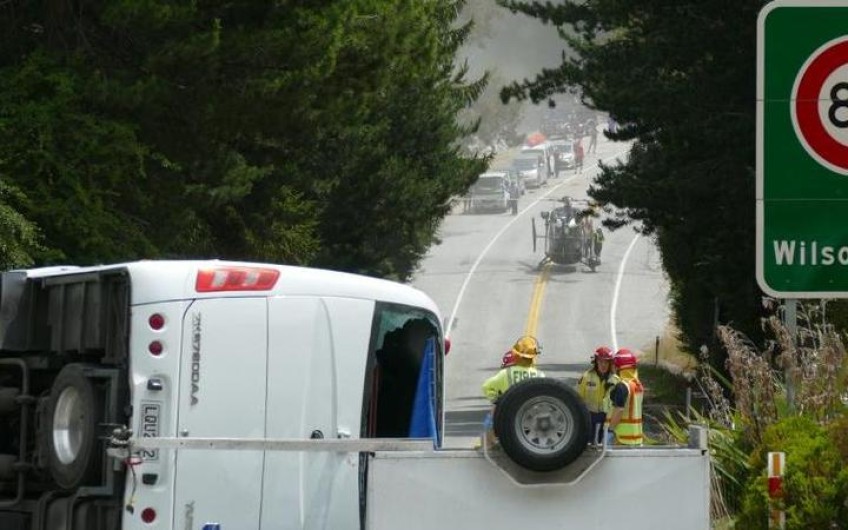 Two still in hospital after bus crash near Queenstown

Two people remain in hospital after a bus carrying a tour group rolled on the Glenorchy-Queenstown road yesterday afternoon.

The bus carrying adults and children rolled about 7km south-west of Queenstown, about 1.30pm.

A confronting and "emotionally charged scene" met first responders, with the white bus on its side in the middle of the road, windows shattered and its trailer overturned.

All the passengers managed to clamber out onto the roadside despite two having serious injuries. One is in Dunedin Hospital and the other in Christchurch Hospital.

The Chinese Consul General has visited the injured person in hospital in Christchurch.

A spokesperson said the two patients' injuries were serious but not life-threatening. He said the Consulate was providing all the assistance it could to the patients and their families.

The bus belonged to tour company Awing Travel NZ, though the Chinese tour group had booked through a separate travel agency.

Queenstown Mayor Jim Boult said his heart went out to those involved, and their families.

"I feel dreadfully for these folks because clearly they're on the other side of the world, on perhaps the trip of a lifetime, and this accident has occurred.

"I can pray for those that are seriously injured that they recover quickly. For all the rest of the folk, they'd be terribly upset."

It took more than seven hours - and some heavy lifting equipment - to get the bus cleared and the busy lakeside road reopened.

The wait left about 300 visitors to Glenorchy stranded for the afternoon, among them holidaymaker Phil McGoldrick, who'd been on a morning jet boat ride.

"Everybody appreciated something very serious had gone wrong and I think there was real concern that fellow tourists were in trouble."

The stranded visitors congregated Glenorchy bars and cafes, he said. "No-one was anxious, no-one was frustrated, no-one was angry. The prevailing feeling was one of concern for those that were injured."

On the Queenstown side, Glenorchy resident Alicia Hawthorn found herself stranded with bags of grocery shopping.

"I've just had to call in at my mum and dad's house and just hang out here and get the groceries into their fridge and freezer instead, because I can't go home," she said.

As a frequent user of the road Hawthorn said it felt safe and well marked, and she struggled to understand what caused the crash, which involved no other vehicles.

That sentiment was echoed by Kurt Lomey who regularly fishes in Glenorchy and said crashes seemed to be happening in the area every other day now.