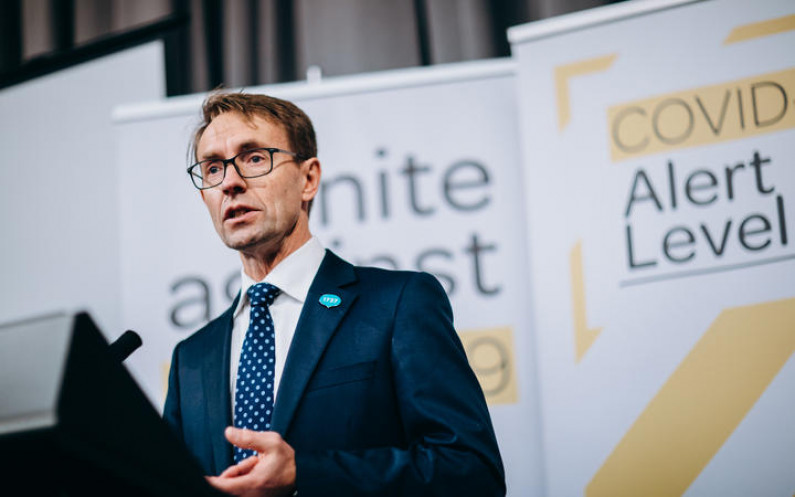 There are two new cases of Covid-19 in managed isolation facilities in the country today, the Ministry of Health has confirmed.

Director-General of Health Dr Ashley Bloomfield said there are still no cases reported from the community.

Both cases have been in managed isolation since they arrived and are now in the quarantine facility in Auckland, Dr Bloomfield said.

One is a man in his 50s who arrived in NZ from India on 24 June - his result came from day 3 testing.

The second is a woman in her 20s who arrived from the US on 18 June, the wife of a previous case who tested positive on 22 June and was already in quarantine as she was considered a close contact.

Dr Bloomfield says the continued spread of the virus overseas is highlighted by a report from the WHO, "which noted a record number of cases over the preceding 24 hours, over 189,000 cases recorded, and you'll be aware also that the number of cases worldwide has now exceeded 10 million."

There is one person in hospital as reported yesterday, in Auckland Hospital.

Dr Bloomfield says the person who has been taken to hospital, who was initially not thought to be symptomatic, had shortness of breath and chest pains and was also tested for cardiac symptoms.

There are still 367 people the Ministry of Health is trying to contact who left managed isolation facilities between 9 and 16 June. The ministry is asking those people to please call the health line on 09 302 0408.

Discussing the review of managed isolation, Dr Bloomfield said it is being finalised this week and he's working on some recommendations.

He said in consultation with Air Commodore Digby Webb, they are implementing having people wear masks when they are moving between their flight and the isolation facility.

People working at the facilities and guests being isolated will be wearing a standard surgical mask. People taking swabs wear N95 masks.

On lack of capacity for testing revealed in the review: "They may not have been able to do it immediately ... it's quite a significant exercise to swab on day 3 and day 12 and as I've covered before there was a gap, but now we've filled the gap."

"Since the 16th we have now clearly caught up on both day 3 and day 12 and people haven't been leaving managed isolation without their negative test."

"The positive tests are coming through largely on that early testing, although that's not in itself failproof either... we also have daily symptom checks."

"I am confident in the process although I am talking with the chief executive, I'm meeting with him tomorrow not just about keeping their crew safe ... but part of that is providing masks."

He said New Zealand has really good stockpiles of PPE, and he is happy to provide detail on that when he has it.

Bloomfield said the system that is in place requires people to play their part: "It is frustrating, and as I say it's not through a lack of effort on our part, a number of calls, text messages, emails..."

He said there has been no rule change around charging for Covid-19 tests, and they should be free.

He said mass masking may play a part in helping prevent the need to rise through the alert levels if Covid-19 does resurge in the community, but for now it is not necessary.

Earlier today, Prime Minister Jacinda Ardern looked to reassure the public in wake of the review on managed isolation, saying she wants people to remember that testing has shown no evidence of the coronavirus in the community.

The review found the managed isolation and quarantine system to be under "extreme stress" and unable to respond to the increasing demands being placed on it as more New Zealanders returned home.