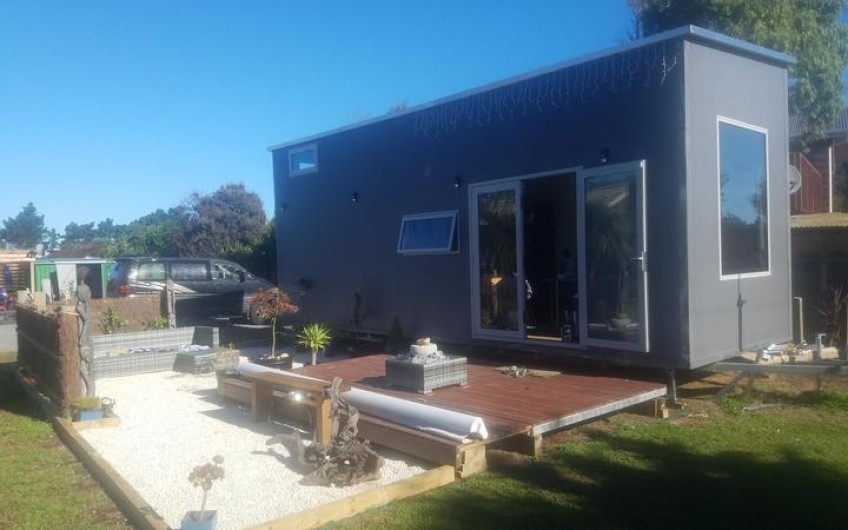 Tiny house owners are clashing with authorities over what they say are unfair and inconsistent regulations.

With no specific legislation for tiny houses, some councils are treating them as buildings that need full building code compliance, and others as vehicles, under the Land Transport Act.

Alan Dall owns a tiny house at Amberley beach in Canterbury and his home falls in the former category. He's now seeking court action to keep his home-made tiny house.

He said he chose to build a tiny house because it was a fantastic lifestyle.

"I'm totally off the grid - I don't get any electric bills, the sun provides all my energy. It's just a nice cheap way of living you know, clutter free, mess free and affordable. I built my tiny house. I built everything myself ... and I've not even broken $37,000 yet," he said.

But although Mr Dall's tiny house is on wheels and can be towed, Hurunui District Council said it was a building, not a vehicle.

It issued him with a Notice to Fix last year, meaning he has to remove or demolish his house, or get a certificate of acceptance by spending thousands of dollars fixing it to the ground to comply with the building code.

Mr Dall approached the Ministry of Business, Innovation and Employment for a determination, hoping they'd agree it's a vehicle - but MBIE sided with Hurunui District Council.

So Mr Dall is taking them to Christchurch District Court to overthrow the determination. He said the preliminary hearing is next month, when a final date will be set.

Down the road in Rangiora, Eco Cottages owner Colin Wightman is vowing to fight what he calls the 'bureaucracy gone mad' of Waimakariri District Council.

The tiny house maker is also about to receive a Notice to Fix, which he said would force him to stop making houses due to the cost of compliance.

But Mr Wightman has sold about 85 tiny houses on wheels, and said he's bewildered why some councils are welcoming them, and others clamping down on his customers.

"Some councils have been wonderful in accommodating tiny houses, at holiday parks and on private property. But the council's I'm looking at - I'm guessing they're talking with one another - are Waimakariri and Hurunui.

"Tasman and Marlborough are in between, they've been semi-accommodating. But it's a concern in itself when you see an inconsistency in the way that they're actually applying the law."

In a statement, the Waimakariri District Council's manager of regulation Nick Harrison said until the Building Act offered greater clarity around tiny houses, building consent authorities needed to continue their role making sure new builds were up to minimum safety standards.

He said the Eco Cottages were a great concept and said the council wanted to make sure they were safe and sound for those who wanted to live in them.

Mr Wightman said all eyes were on Mr Dall's court case - which would be a landmark for the future of tiny house owners across New Zealand.

The matter has also been taken to parliament by Green MP Gareth Hughes, who said tiny houses were an innovative solution to the housing crisis.

"I think they really tap into that Kiwi ideal that you can actually build your own home. So we need to make sure there's a clear space that they can be built if that's what people want," he said.

His ideas were welcomed in Parliament by Building and Construction Minister Jenny Salesa, who is in the process of analysing the Building Act.

She agreed that the government should investigate all options for innovative solutions to the housing crisis.

Mr Hughes said tiny house owners shouldn't be burdened with compliance costs they couldn't afford, but added that the government shouldn't be providing workarounds by letting people "slap wheels on structures and call them a vehicle".

In a statement, MBIE's GM Building System Performance, Anna Butler, said regardless of building type, the Building Act aimed to ensure users of buildings could use them safely and without endangering their health.

"The government wants to ensure that tiny houses are healthy, safe and durable so that the well-being of people is safeguarded," she said.