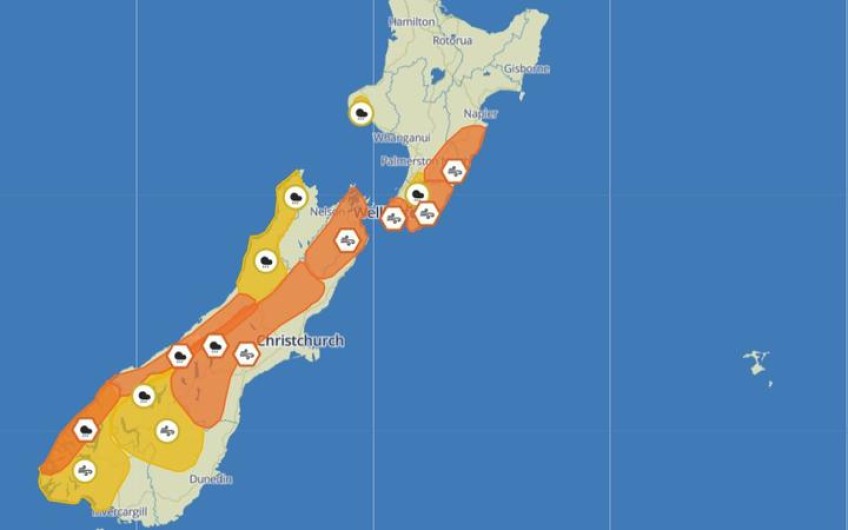 Western areas of the South Island are likely to bear the brunt of this week's wet and windy weather, but temperatures will drop well below the summer average in many parts of the country.

Rain and wind warnings were in place on Tuesday for many parts of south and central New Zealand. Photo: MetService

Heavy rain and strong winds are expected in the centre and south of New Zealand.

MetService forecaster Mmathapelo Makgabutlane said the western South Island including the Fiordland region could have 150-250mm of rain throughout today and into tomorrow.

In Westland, thunderstorms may continue during the day along with strong wind and even hail.

Makgabutlane said temperatures in the South Island were starting to fall.

"From today, already we see those temperatures starting to drop over the southern parts of the South Island, and all the way into the southern lakes as well."

Wanaka and Queenstown would reach a maximum of 15C, well below the January average, she said.

"Those cold temperatures continue into Thursday with the first signs of back to average temperatures only coming through by the end of the working week."

A southerly air flow behind a cold front is bringing the cooler air from the Antarctic, with the drop in temperature partly responsible for the thunderstorms.

"Those cool temperatures, especially in the upper atmosphere, cause quite an unstable atmosphere, bringing very favourable conditions for [the] thunderstorm activity."