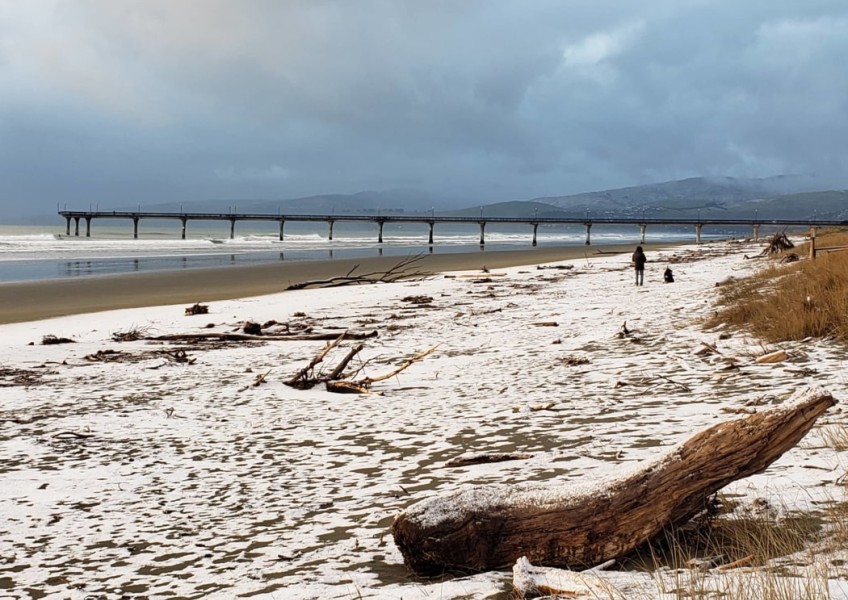 Snow has fallen in Christchurch and Dunedin, and is disrupting travel in both islands, while high winds have brought down power lines in the North.

Temperatures dropped overnight in the South Island as a blast of cold weather moved northwards bringing show showers to many areas.

In Dunedin, driving was treacherous, buses in the hill suburbs were cancelled and schools started the day late. Police had advised motorists to avoid travel in the city's hill suburbs because of the icy conditions.

State Highway 87 was closed between Middlemarch and Outram, while SH1 between Dunedin and Waitati reopened after being closed early morning.

Snow fell to sea level in New Brighton beach, coating the sand white after the dumping.

In the north, the Desert Road was closed between Waiouru and Rangipō. The Napier-Taupō Road (SH5) reopened after being closed due to snow.

There were snow flurries on Transmission Gully (SH1) north of Wellington, and also reported in the Wellington hill suburb of Brooklyn. Snow showers were expected on the Remutaka Hill Road between Wellington and Wairarapa until 10am.

Skifields at Ruapehu had a new blast of snow, with staff estimating a cover of 15-20cm at Whakapapa and 20-25cm of snow at Tūroa. But due to high winds and avalanche risk, all facilities at both skifields are closed for the day.

Gales in the North Island left hundreds of people were without power early on Tuesday.

In Hawera, wind brought lines down, cutting power to 135 households, and in 121 households in Morrinsville were without power due to trees falling on lines.

Fallen trees also took out power lines on SH1 south of Kaitaia and about 500 people were without power.