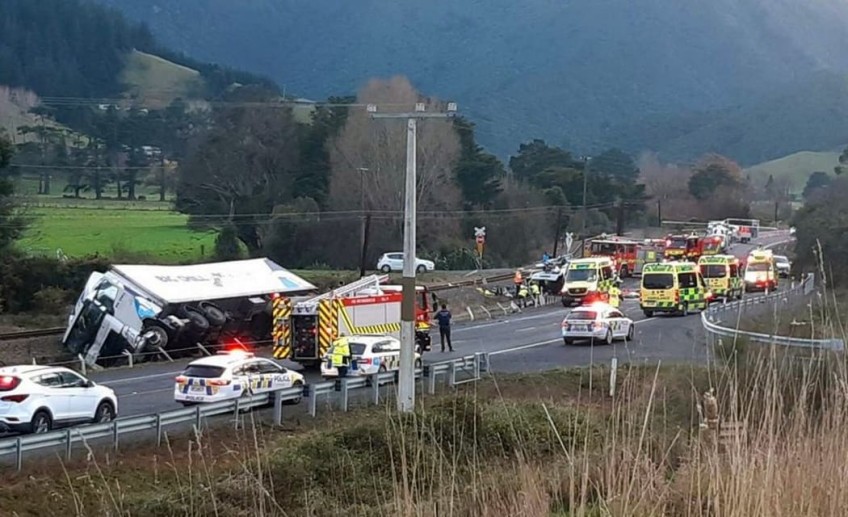 Seven people, including a child, have died in a crash between a truck and a van on State Highway 1 south of Picton this morning, police have confirmed.

Police said the crash was at Mount Pleasant at about 7.30am this morning and was a head-on crash involving a van and a refrigerated goods truck.

One person has critical injuries and one has serious injuries. They have been flown to Wellington Hospital.

All of the seven who died and the two flown to Wellington were travelling in the van. The driver of the truck has minor injuries.

Tasman District Commander Inspector Paul Borrell said a crash of this scale had a "huge impact" on the community.

The focus of police "remains on ensuring victims are supported, and that the circumstances of the crash are fully investigated."

Waka Kotahi said SH1 was closed south of Lindens Road intersection and was expected to remain closed all day. Emergency services, contractors and investigators were working at the site.

Light vehicles could take the longer Queen Charlotte Road, between Havelock and Picton, but the Transport Agency said trucks would have to park up for the day, until the highway reopened.

KiwiRail said it would adjust ferry sailings in response to the road accident.

"We are working closely with our customers booked on ferries today, to let them know of the road closure.

"We are also working to reschedule any customers who will miss these sailings."

Trish Rawlings lives a few meters away from where the crash took place and was woken by the noise.

"I was still in bed and I heard two big bangs. When I went down there, my husband came down there with me as well. There was a lot of police cars and ambulances and fire engines."

She said she went out outside to check and saw two helicopters arrive.

"And we could see a big truck on the side that has gone through the railings and another vehicle close by. It wasn't a nice scene unfortunately."

She could see the traffic jam from her gate late this morning.

"There was still traffic coming from the Blenheim end of SH1, but obviously that was stopped literally at our gate and there were no vehicles coming from the Picton end. The road had been cordoned off that side."

Rick Rawlings said there have been at least two serious crashes on the corner in the past few years.

He said vehicles heading south from Picton have a good run until they get to Mt Pleasant, where the road narrowed.

He has called for greater safety measures on the state highway.

"Put some signs up but widen the road. I think actually, right the way through the Koromiko Valley there are a few overtaking spots, but I think the speed needs to be dropped. 100 km/h is too fast for some of these roads."