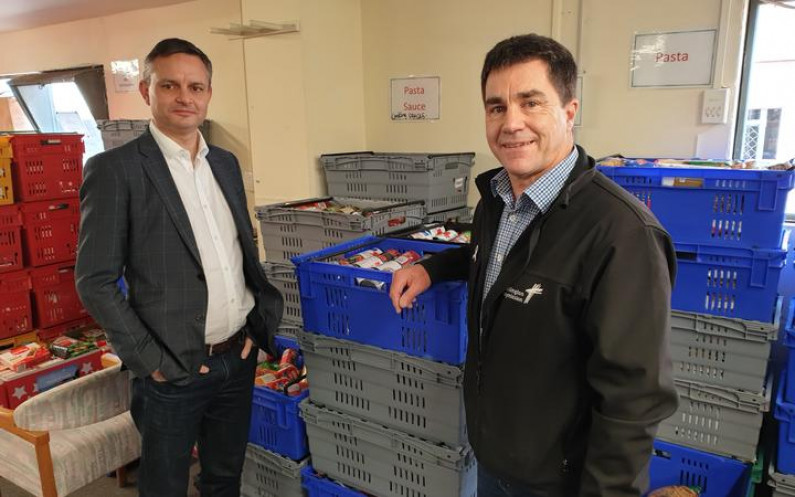 A delivery of fresh vegetables and fruit has just arrived at Wellington City Mission's Newtown depot - mountains of apples, oranges, carrots, broccoli - enough to feed hundreds of people over the next few days.

A volunteer busily trimming broccoli explains it will all go in the chiller, ready for other volunteers to make up into food parcels during the week.

He has also just picked up a van-load of bread and other baked goods from the New World supermarket across the road.

"This stuff is still good for a couple of days ... the supermarkets are really good to us. It's all about community, isn't it? Supporting each other."

Demand for food parcels has increased 500 percent since the pandemic began.

"What Covid has done is it's accentuated the issues," he said.

"So those issues were there anyway - but all of a sudden we've broadened the base of those impacted by it.

"Is that a food issue? No, it's a household income issue, it's a housing issue because particularly in Wellington, housing is unaffordable."

Wellington City Mission expects demand for services to increase over the next year as more people find themselves out of work.

The state should treat poverty with the same urgency as the pandemic, Edridge said.

"During Covid [the early stages of the pandemic] the government was awesome, what we saw was courage and bravery and a preparedness to do things under a state of emergency.

"Now we are back under some kind of normalcy, the bureaucracy is reclaiming its space."

The government needed to target funding to support initiatives around housing and food distribution, Edridge said.

Wellington City Mission has applied for funding under the government's shovel-ready project fund for its ambitious rebuild, which is already consented.

Whakamaru will include 35 supported living apartments for people who have endured chronic homelessness, a 120-seat cafe offering healthy and affordable meals, a social supermarket, a commercial laundry with free services for people on the street, and office space for staff and volunteers.

Mission staff met with contractors this week, and Edridge said it was hoped the new facility could be up and running by mid-2022.

Meanwhile, Wellington City Mission is planning to trial the "social supermarket" model to replace the food bank at its current premises from February next year, allowing clients to select their own food rather than having it parcelled up for them.

"Many of us just assume life's okay and for an awful lot of people, life is not okay," Edridge said.

"The biggest impact on you emotionally I guess is people who turn up here with young families who just cannot afford to feed their kids. And for a country like New Zealand, that's just unacceptable."

Green Party co-leader James Shaw, who visited the mission today, said social services like these were "absolutely critical" at such a time.

"It's clear from the pressure they've been under to deliver food parcels and so on that there's a continued need to be met."

The party's Poverty Action Plan would give people a guaranteed minimum income of at least $325 a week, in line with the recommendations of the Welfare Working Group, Shaw said.

"If people think that the kind of crisis levels of poverty that we're seeing in Aotearoa are unacceptable, I would argue that there is one party that's prepared to take bold moves in order to fix that problem."