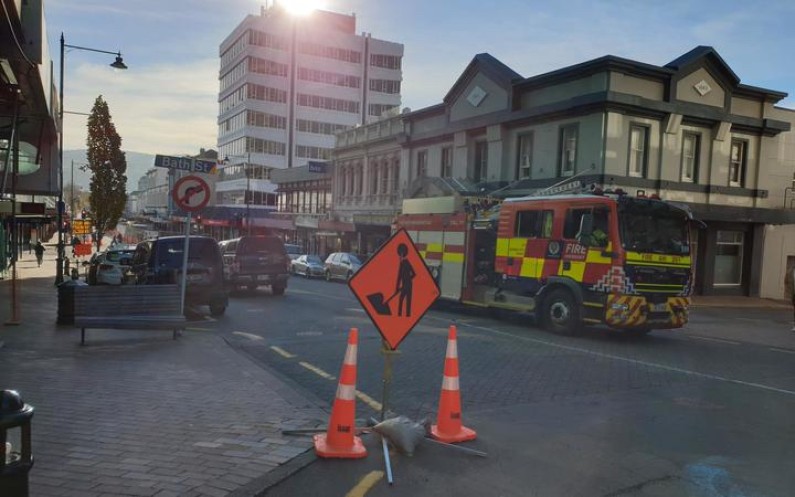 One hospitalised after reports of explosion in central Dunedin

A contractor working on upgrades to Dunedin's city centre has suffered serious injuries after receiving an electric shock this morning.

Emergency services were called to George Street just before 9am.

A St John spokesperson said the worker received treatment at the scene before being taken to Dunedin Hospital in a serious condition.

Workers at the Otago Sports Depot, which sat directly across the road from the incident, said the incident sounded like metal pipes falling.

Dan Hewston said he read it was described as an explosion but it did not sound like that to him.

"All we heard is I thought a couple of pipes had fallen or something. Then people started running to help someone that looked like they'd been hurt. Then they started to chuck up sheeting around so you couldn't see anything else.

"There was a bit of commotion, people started running and grabbing water and someone said 'Chuck me a knife', so I thought someone had a pipe fall on them. But someone was reasonably seriously hurt.

"But no power went out and I didn't think it was an explosion."

Otago Sports Depot owner Brent Davies said the worker was conscious when he was loaded into the ambulance.

The Dunedin City Council said WorkSafe had been alerted.

"An Isaac Construction employee working on the George Street - Retail Quarter Upgrade has been taken to hospital after being electrocuted on site this morning," a spokesperson said.

"WorkSafe has been notified and a thorough investigation into exactly what happened will take place in due course. However, our immediate focus is on the welfare of the worker and colleagues who witnessed the incident.

"The worksite where the incident occurred - on George St between Moray Place and St Andrew Street - has been made safe and closed down until further notice."

The incident did not result in power being lost to the area.