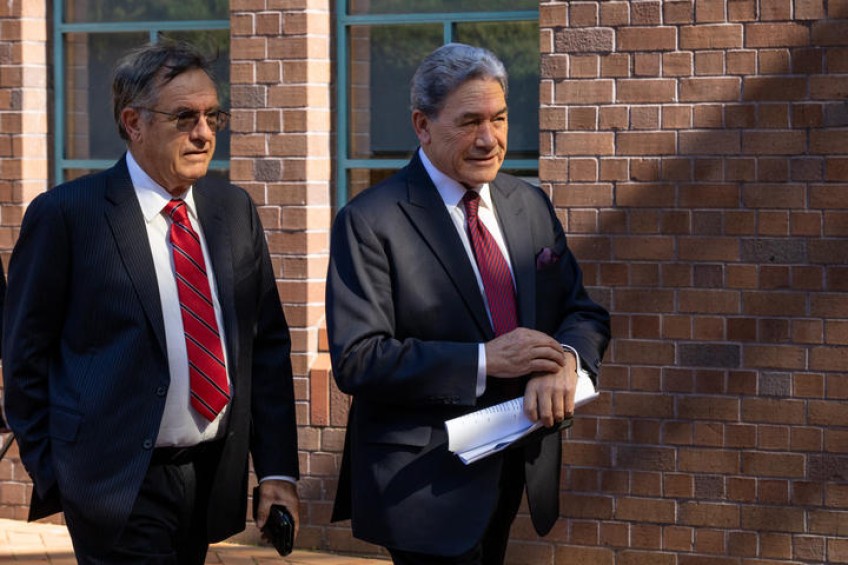 The company immediately began its bid for money from the Provincial Growth Fund and also sought funding from the One Billion Trees programme - both overseen by New Zealand First Minister Shane Jones.

Less than a week after that rejection, Future Forest Products appointed the partner of New Zealand First Leader Winston Peters as a director of the company.

Jan Trotman, who has extensive experience as a director and senior manager of commercial businesses, shares a home with Mr Peters, who is also deputy prime minister, in central Auckland.

Ms Trotman was made the fourth director of the forestry company on 27 August, when the company bid for at least $1 million from the Provincial Growth Fund was still live.

Jan Trotman was made a director of Future Forest Products in August Photo: RNZ / Patrice Allen

Mr Henry refused to answer any questions about his involvement with the company or its application for public money.

Mr Jones, who is minister for forestry and regional economic development, also refused to be interviewed for this story.

But his spokesperson said the application for funding from the One Billion Trees programme never reached ministerial level. Forestry officials decided Future Forest Products was not eligible and the minister was not involved.

The company's bid for funding from the Provincial Growth Fund was then knocked back this month, after Labour Party ministers rejected it.

Mr Jones' spokesperson said the minister sought advice from the Cabinet Office as to whether he had a conflict of interest because of his relationship with Brian Henry. The Cabinet Office believed there was a potential conflict of interests and so he recused himself from the Future Forest Products application for Provincial Growth Fund money, she said.

Representatives from Future Forest Products held personal meetings, video conference calls and email exchanges with officials from the Provincial Development Unit over the application, from March to October.

On 7 November, government ministers met to consider the application. A spokesperson for Mr Jones said the minister was at the meeting but left the room for that agenda item and the decision to reject the bid was made by Labour ministers Grant Robertson, Phil Twyford and David Parker.

Brian Henry, his son David Henry, and Jan Trotman are three of the directors of Future Forest Products Photo: RNZ

Future Forest Products has shown interest in the government's efforts to make Gisborne a centre for wood processing excellence.

In February 2018, Mr Jones announced $200,000 for the Eastland Community Trust to develop a 'wood cluster centre of excellence' in Gisborne. Then in March 2019, regional economic development ministers approved another $19.5 million for the project, according to a Cabinet paper obtained by RNZ under the Official Information Act. That same month, Future Forest Products was set up.

A Gisborne Herald report, published in September this year, said Future Forest Products specialised in engineered timber and was looking to bring a state of the art processing plant to Gisborne at a cost of about $45 million.

An RNZ Official Information Act request shows that David Henry, Brian Henry's son and a fellow director of Future Forest Products, emailed that article to Mr Jones asking whether the minister had seen it.

Mr Jones said that was the only correspondence he has had with the company.

Future Forest Products was working with the Eastland Community Trust in Gisborne to develop the wood processing plant to produce timber to be used in modular housing, the trust told RNZ.

As managing director, David Henry has been the public voice of Future Forest Products but its ultimate investors and shareholders are a mystery.

The company is entirely owned by Kinleith Continuation LP, a limited partnership entity.

On its website, the Auckland District Law Society describes the limited partnership regime - which has only existed since 2008 - as being set up "with the express intention of appealing to foreign investors".

Both partners have to register their details with the Companies Office, but only the general partner's details are made public - the limited partner's details and their level of investment remain confidential. The partnership agreement itself does not need to be registered.

David Henry is listed as Kinleith Continuation's public partner but RNZ was unable to obtain details of the limited partner or the entity's shareholders.

Both Kinleith Continuation and Future Forest Products are registered at the same address - a flat on Auckland's North Shore purchased last year by a company that Brian Henry and his wife own.

As well as its bid for government funding, Future Forest Products has also been busy with acquisitions in its short existence.

On 29 August it announced it had entered into an agreement to acquire Claymark Group Holdings, a New Zealand-US wood product manufacturer.

And just last week, the company said it had entered into a "strategic transaction" to purchase a 25 percent stake in Northland lumber company North Sawn Lumber and help it build a sawmill in Ruakaka.

In an op-ed published by the National Business Review in August, David Henry said Future Forest Products' "growth ambitions" would require $900m over the next decade. "While Kiwi investment is always welcome, the majority will be overseas capital," he wrote.

However, the rest of the op-ed called for the government to guard against "short-term opportunism" and only allow foreign forestry investment from "international investors with genuine sustainability and social licence objectives".