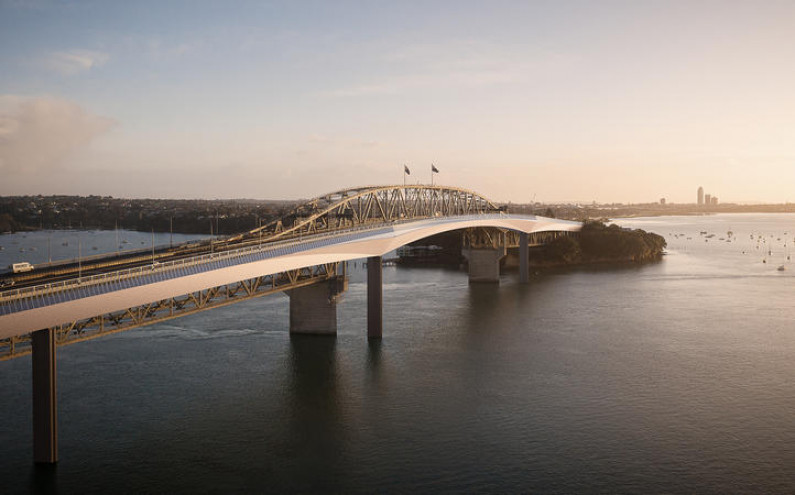 Transport Minister Michael Wood has confirmed the government wants to build a new separate bridge for cyclists and walkers alongside the Auckland Harbour Bridge.

A second crossing has long been discussed in Auckland as the city grows rapidly.

In a statement, Michael Wood said geotechnical investigations and testing has found that adding a structure to the existing bridge is not possible.

The existing piers cannot take the extra weight, he said.

"We need this transport connection to move ahead but it isn't technically possible to attach it to the existing bridge without putting the whole structure at risk.

"A stand-alone structure is the safest option that will not only provide a walking and cycling option for commuters but creates an outstanding piece of tourism infrastructure."

The announcement comes a week after more than 1000 cyclists forced their way onto Harbour Bridge closing two northbound lanes.

"The New Zealand Upgrade Programme (NZUP) is supporting our economic recovery, but due to Covid-19 increasing construction costs globally, and the need to further reduce emissions, we're rebalancing the programme to increase investment in rail, public transport and walking and cycling," Wood said.

"Northern Pathway is the missing link in Auckland's walking and cycling network and Aucklanders finally will be able to get across the harbour by foot or bike."

In the mean time, Waka Kotahi would continue to work on how to provide safe temporary trials of using lanes on the existing harbour bridge for cyclists and pedestrians, he said.

The transport agency said the stand-alone crossing would cost about $785 million, though it also warned costs would need to be refined.

It planned to start the process of securing approvals later this year using the Covid-19 Recovery fast-track legislation.

Construction could begin at soonest in the middle of next year. It would take somewhere between two and five years to complete.