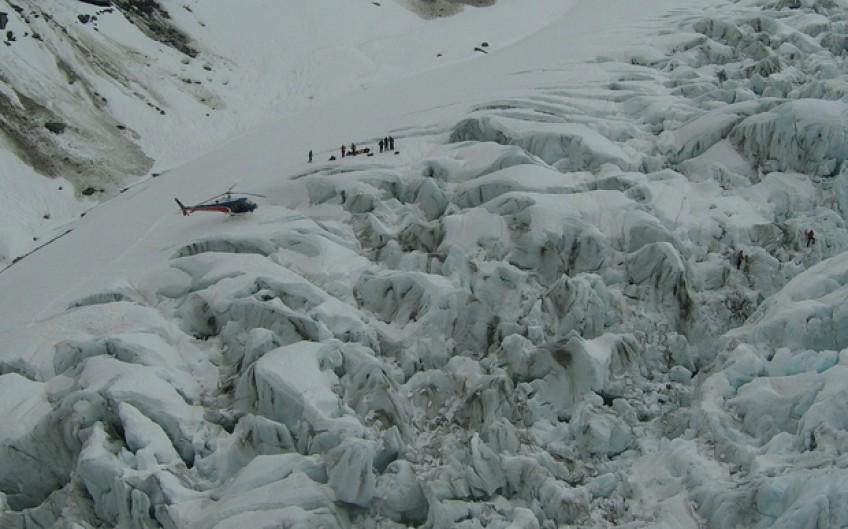 Transport investigators have found numerous failures by both the operator and aviation watchdog in the lead up to a helicopter crash on Fox Glacier which killed all seven on board in 2015.

The Transport Accident Investigation Commission (TAIC) has just published its final report on the crash.

Its chief commissioner, Jane Meares, said the operator's training system was ill-defined and below standard, and the pilot wasn't properly trained for scenic flights.

Photos taken by passengers show snow was falling when they were on the glacier, and it was very likely the weather conditions were below minimum flying criteria.

The pilot's perception of height above the glacier would have been affected by cloud, precipitation, flat light conditions and condensation on the windscreen.

The commission also found the Civil Aviation Authority (CAA) had identified significant problems with the operator which warranted intervention, but had done nothing about it.

Ms Meares said the TAIC were concerned that there could be a wider safety issue where other aviation companies also had their failings overlooked by the CAA - and recommended the authority initiate an independent review of past CAA surveillance activities.

The commission also found the aircraft was overweight.

Authority faulted repeatedly by the Auditor-General

Earlier this week the CAA admitted its oversight of Alpine Adventures should have been better but said it has fixed the problems.

The authority has been faulted repeatedly in a series of reports by the Auditor-General between 1997 and 2010.

"Non-compliance had not always been reported as findings, inspectors were also too trusting and did not verify the information that was being given to them; With the benefit of hindsight we can say our oversight of J P Scott should have been better," CAA Chair Nigel Gould said on Monday, owning up to the organisation's past faults - which he said were revealed in an internal audit in 2017.

The wreckage of the helicopter on Fox Glacier. Photo: NZ Police

But the Auditor-General had been pointing out variations of the same problems for two decades.

In 2010, Lyn Provost wrote: "Since 1997, my office has carried out four audits of the CAA ... the CAA reported publicly that it was making good progress in strengthening its certification and surveillance functions.

"However, in my view, the CAA has not made adequate progress in addressing our 2005 recommendations.

"Of the 10 recommendations made in 2005, I consider that only one - the introduction of a new risk assessment tool - has been fully addressed."

Back then, Ms Provost found serious problems with the way the CAA certified operators, with its inspectors' record keeping and criticised the inconsistent response to those who broke the rules.

She made 14 recommendations, which the authority accepted. Ms Provost pointed out she and her predecessors had received similar promises in the past which came to nothing.

As a result, the CAA was put on a strict monitoring regime until 2012. At that point it said improved training for its inspectors would be rolled out.

The Auditor-General's final recommendations were eventually signed off last year.

The Civil Aviation Authority (CAA) said the report reinforced "the need for its ongoing efforts to significantly improve its regulatory performance that commenced in earnest in mid-2013 in response to previous criticism of its performance made by the Office of the Auditor General".

CAA director Graeme Harris said, while the TAIC report did not identify a conclusive cause of the crash, "it does portray a confronting picture of the ineffectiveness of the CAA's regulatory oversight of the operator in the lead-up to the crash - particularly during the period 2011 to 2012".

He said as a result of the efforts of the CAA since 2012 there had been 76 percent reduction in the rate of accidents involving helicopters conducting Air Transport operations.

"Prompted by a recommendation in the draft TAIC report I decided to initiate an independent review of a sample CAA surveillance reports and any findings raised for oversight of this section of the aviation sector between 2014 and 2018," Mr Harris said.

"I engaged PwC to do this work with the primary objective of determining whether there were unresolved safety issues with other operators still in the system.

"In particular I wanted to identify if there were any other 'high risk' operators, like JP Scott. There were not.

"In fact, a small number of operators that initially raised concerns during the PwC review had been removed from the aviation system by the CAA or been subject to other effective interventions that had reduced the risk they posed.

TAIC findings The helicopter crashed at high speed, with no mechanical issue identified The helicopter's maximum permitted weight was "almost certainly exceeded" The tail rotor servo had exceeded the maximum flight hours, although that was unlikely to have been a contributory factor The weather conditions on the day were unstable and unsuitable for conducting a scenic flight. Localised conditions were very likely below the minimum criteria allowed It is very likely that when the helicopter took off from Chancellor Shelf and descended down the valley the pilot's perception of the helicopter's height above the terrain (snow and ice) was affected by one or more of the following: cloud, precipitation, flat light conditions, condensation on the windscreen The pilot had not been properly trained and did not have the appropriate level of experience The operator's training system was ill-defined and did not comply fully with the Civil Aviation Rules The operator's training system did not have sufficient oversight by the designated senior persons The CAA had identified significant and repetitive non-compliance issues with the operator that warranted intervention long before this accident occurred

Read the reports on CAA's progress implementing the Auditor-General's recommendations.