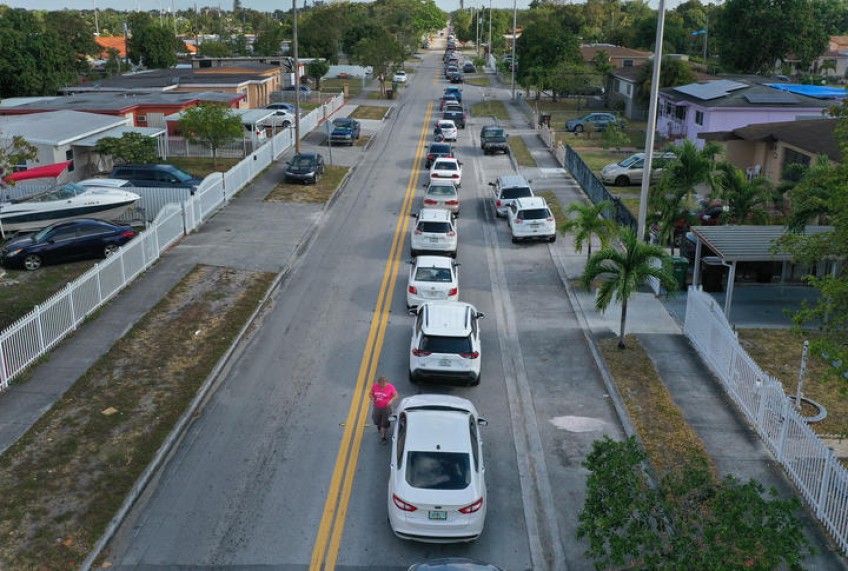 Millions file for unemployment subsidies in US: 'From anxiety to frustration to defeat'

A shocking 16.8 million people filed for US unemployment benefits in the last three weeks as the country shut down to stop the spread of coronavirus, overwhelming state labour departments and creating a large backlog of applications.

A month after the virus was declared a pandemic, many newly jobless Americans are still waiting desperately for their unemployment checks. After going weeks without a paycheck, they are falling behind on their bills and drastically ratcheting back spending.

The delays come as other federal stimulus, including a small business lending program, also experiences hiccups. And the slow federal response could ultimately make the economic hit from the shutdown worse, economists warn.

Zaborah Roane, 48, a laid off daycare worker from Raleigh, North Carolina, said her application for unemployment benefits was still pending, about two weeks after she applied.

"Every day you just have to see what that day brings to help you decide what your next move is going to be," said Roane, who was able to buy groceries with help from the National Domestic Workers Alliance, a nonprofit group raising money for workers affected by the virus.

The US $2.3 trillion ($NZ3.78t) stimulus act, signed at the end of March, includes a $US600 a week across-the-board unemployment payout. Some states have started issuing the benefits, but in some states it could take until May for this money to filter through creaky federal and state bureaucracies into the bank accounts of Americans.

States facing a surge in applications are increasing staff, expanding call centre hours and changing their application processes to make it easier for people to file for benefits.

Some states, including Illinois, Michigan, New Hampshire and New York, are asking people to apply on certain days of the week, based on their name.

Others have told independent contractors, who are supposed to be eligible for benefits under the stimulus package, that their benefits are not yet available but they are coming.

Volunteers distribute food to needy families during a drive-through event on 9 April, Orlando, Florida. The food bank has seen record demand, due to job losses caused by the pandemic. Photo: AFP

Jason Suggs, an unemployment claims processor for the state of Maryland, estimates that the state has lost two-thirds of its claims processing staff over the past decade to retirement and attrition.

"The first thing someone says to you when you answer the phone is, 'I've been on hold for four hours," Suggs said on a conference call organized by public sector employee unions.

Simon Tung, 38, and his wife Christina shut down their two Manhattan macaron bakeries and a cat cafe on 15 March, and had to lay off their more than 20 employees. Some have not been able to apply for unemployment benefits, Tung said, while other employees have received full benefits.

Filing their own claims was an odyssey, Tung said. He first filed for unemployment online on 22 March, but was notified he needed to call to submit more information.

He called hundreds of times. When he did get through, sometimes he would get a message saying the system was overwhelmed and to call back. On 2 April he received his first direct deposit from New York state - for $0.

"It got to a point where it went from anxiety to frustration to defeat, and you're just laughing at everything," he said.

The New York State Department of Labour launched a streamlined application process Thursday, with a "call back" system for people who need to submit additional information.

Other workers faced several weeks of anxiety before securing benefits.

Desire Nesmith, 24, who was laid off as a substitute teacher and child-care worker in Fort Worth, Texas, received a payment last week but was immediately told she needed to send the money back after the department struggled to contact one of her former employers.

It was a frustrating turn after weeks of struggling to have her claims processed online. Nesmith placed about 400 phone calls into the Texas employment office on Tuesday alone, she said, before she received a call in the afternoon letting her know the error was cleared up and her payments were approved.

"I was on the verge of tears," she said of the relief she felt.