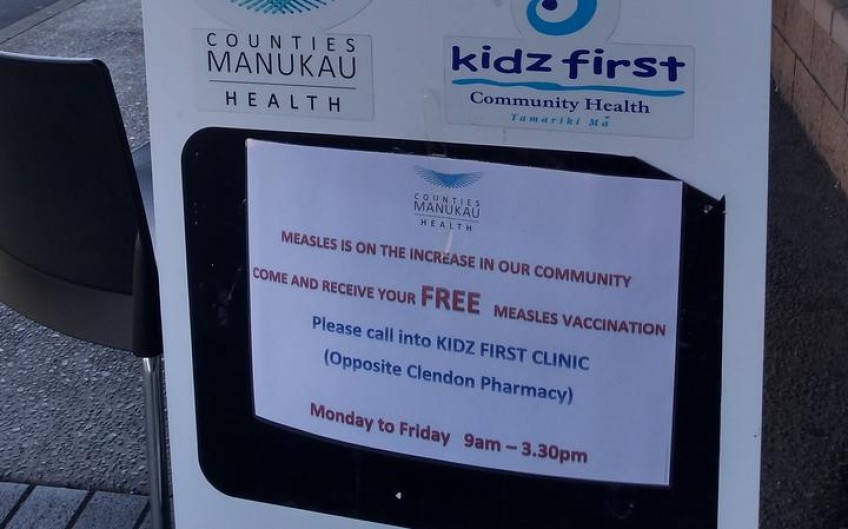 Auckland medical clinics are running out of measles vaccines as they scramble to keep up with ballooning demand for immunisations.

The number of measles cases in the country's worst outbreak in more than two decades has now topped 990, with 821 of those in Auckland.

This time last year there were 12,000 doses of MMR distributed nationally over a month. There were 9000 distributed yesterday alone.

Auckland health authorities said they had plenty of MMR doses available but medical clinics said they were administering so many vaccinations they were running out, with patients are being told they would have to wait days to get them.

At Titirangi Medical Centre in West Auckland today, staff were flat out answering patients' questions around immunisations, and administering jabs.

Doctor Michelle Conning said medical clinics across Auckland were in a similar position - and she encouraged people to be patient.

"My understanding is there's no shortage of the vaccine, but the overwhelming demand for it, particularly this week. It's just a logistal thing of getting the vaccines ordered and here.

"The vaccines obviously need to be sent out at a certain temperature ... I think that everybody that wants one is going to be able to get one but it just can't happen right now, right this minute, because there isn't enough room in the fridge or enough nurses," she said.

Dr Conning said there was a delay of a couple of days at some clinics in getting the jab administered.

Dr Conning has seen firsthand the impacts of measles - her son had the illness when he was 14 months old, just shy of the recommended 15 month age to receive his second MMR vaccination.

"His face became so swollen that he couldn't open his eyes and had to be on a drip for several days because he wouldn't drink anything," she said.

A sign outside the Clendon pop up free vaccination clinic in Auckland. Photo: RNZ / Amy Williams

"It was pretty awful."

The latest measles outbreak has hospitalised seven children and eight adults across the region, including one adult and one child in intensive care.

Dr Conning said there were people in the Titirangi community who chose not to immunise their children, but she urged them to reconsider.

"We have patients who have had organ transplants, we have children who have had chemotherapy recently ... that come in to see us for other reasons and they're actually scared sitting in our waiting room, waiting for something to happen.

"If I was a parent of a child who couldn't be vaccinated - I would be absolutely terrified at the moment and I think that people who don't believe in immunisation, I think if they had a child in that position they would most likely feel differently," she said.

"These kids and young people are basically hiding away, scared to go to school or university because we just don't know who might be infectious."