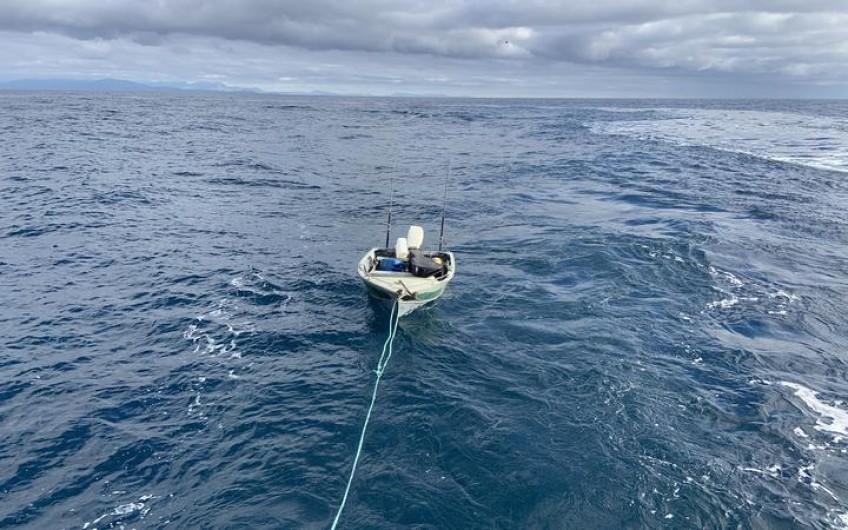 An 18-year-old man who made an overnight trip across Cook Strait in a motorised dingy had to be rescued after becoming stuck off the Mana Coast.

The dingy which made the trip across Cook Strait is towed to safety. Photo: Supplied / NZ Police

The man started out from Keneperu Sound at around 10pm yesterday and went through Pelorus Sounds in the dinghy before crossing Cook Strait, police said.

He contacted the Harbour Master at about 9am today saying he had broken down off the Mana Coast but was unsure of his exact location.

Police were able to geo-locate him from his mobile phone and found that he was 12km west of Mana Island, he was rescued and brought back to shore in what police said was reasonably good condition - cold but not hypothermic.

Senior sergeant Dave Houston said in a statement that while it was a good outcome, people should remember that Cook Strait is a dangerous stretch of water.

Only capable seamen with proper safety equipment should make that coastal voyage, he said.

Houston said that while the man did have a life jacket and cellphone he had not checked on the weather conditions which were rough for a small dinghy, nor was he an experienced seaman.

Everybody going out on the water needed to remember to wear a lifejacket, check the conditions and only go out if it is calm and go out in daylight, he said.

"If it wasn't for him ringing and us being able to locate him from his phone data it could have been a very different outcome.

"The battery on his cell phone was becoming flat. If we didn't have the mobile locate we would have had a massive search. The mobile locate, literally saved his life."