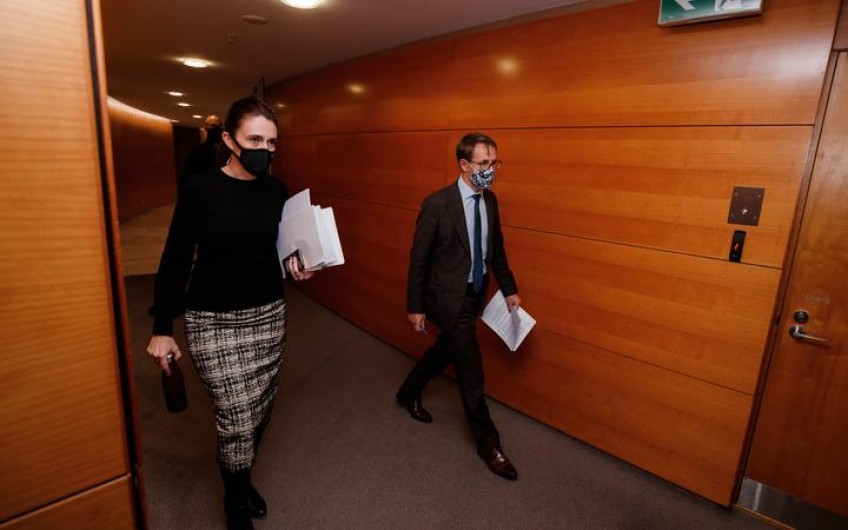 Prime Minister Jacinda Ardern says six days into the outbreak, the government has identified the source of the outbreak as a returnee from NSW who was at the Crowne Plaza before being transferred to quarantine at the Jet Park.

"We'll continue with that investigation and update you as we go."

She says testing during the six-day period is a record "by quite some way", and accounts for about 3 percent of the population.

Some 108,000 tests have been taken in Auckland, she says, and thanks those who waited in queues, saying with additional testing centres being stood up wait times are starting to reduce.

"With Delta, more certainty is needed," she says, which is why such a quick lockdown was important.

She says Delta got a headstart against New Zealand before the lockdown.

"Early estimate suggest that number may be six or higher, you may recall from previous outbreaks that number needs to be less than one in order for the virus to be stamped out, so we have some way to go yet."

She says known contacts are spread across all of New Zealand, and there may be more contacts that are not known.

Cabinet has decided all of New Zealand will remain at level 4 for an additional four days, until 11.59pm, Friday 27 August.

She says these settings will be reviewed on Friday.

She says we know enough that Auckland will continue to be the main location of the outbreak, and will remain in alert level 4 until 11.59pm on Tuesday 31 August. That setting will be reviewed next Monday.

"Delta has changed the rules of the game, but we have changed our approach too, we've hardened our alert levels, widened our contact tracing, required more mask wearing and we are testing more people. It is absolutely possible to get on top of this, we just need to keep it up and ensure that we're not in restrictions any longer than we need to be."

She says people who are not essential workers should not leave home unless they are getting some fresh air once a day.

People should also remember that some people have disabilities and are not able to wear a mask, and asks people to be kind.

Ardern says on the advice of the Director-General of Health, Parliament will be suspended for a week.

"While of course we want to ensure that representatives from across the house have the ability to scrutinise the government at this time, physically bringing MPs from across the country to Parliament does pose risk."

She says ministers will be available to appear before select committees.

"These committees will continue to meet virtually, that will allow us to balance safety and scrutiny. We'll use the next week to see if there are other enhancements we can make. I would add that these types of alternative arrangements are common throughout the world as other Parliaments manage outbreaks in their countries also."

Over the weekend, the government also announced moves to make record-keeping, such as using the Covid Tracer app, mandatory, although the rules have left businesses confused over which areas are covered.