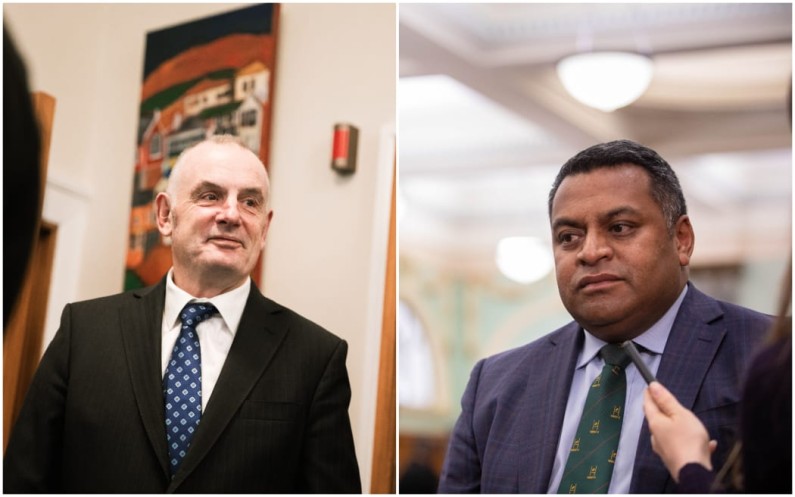 Today's Cabinet reshuffle has been sparked by the departures of Kris Faafoi and Trevor Mallard.

Earlier, it was confirmed Prime Minister Jacinda Ardern would announce some "minor" changes to the Cabinet line-up.

Ardern confirmed Faafoi had decided to leave Parliament to be with his family as his youngest son started school.

"This was a decision Kris expressed to me at the election. In fact, he had intended to leave 18 months ago but I asked him to give us another year," she said

"I'm grateful for the significant work he's undertaken so far this term in resetting our immigration and public broadcasting settings.

"His contribution as a minister has been hugely valuable. He goes with the love and thanks of his colleagues for his contribution over many years and he will be greatly missed. But I know we can never miss him as much as his family already has.

"And I thank him for the gift of his time."

Trevor Mallard will step down as Speaker of the House in mid-August "as he prepares to take up a diplomatic post in Europe".

"Trevor has been an MP for 35 years and has held 13 different ministerial portfolios across his career including education, labour and the Rugby World Cup. He has been Speaker for five years and is currently the grandfather of the house.

Ardern said after the 2020 election, Mallard mentioned he wanted to "transition out of the role of Speaker over the course of this term to allow someone else the opportunity and to take on new challenges himself".

"He's worked closely with Adrian Rurawhe as deputy speaker for that purpose and we will be nominating Adrian to replace him in this role.

"We'll have more to say on the diplomatic posting in the coming months."

Ardern denied Mallard's departure was due to the recent pressure for him to resign.

All Speakers faced pressure from the opposition but it was not the reason for him leaving, she said.

As widely expected, Poto Williams was stripped of her responsibility for the Police portfolio, but will remain in Cabinet.

She picks up conservation and disability issues.

"Poto and I both share the view that at this time it's critical that our focus is on supporting the police, implementing our record investment in the frontline, passing our further gun law reforms and developing additional measures to deal with the current escalation in gang tensions and violence. That focus currently has been lost," Ardern said.

"Poto is a capable minister and retains my confidence, that's why she is still in Cabinet, but change is required ... Chris Hipkins takes over as minister of police.

"He has a degree in criminology and a long interest in working in the youth justice space, which dovetails with his education work. Along with the minister for social development and employment he will co-lead a youth justice ministerial team to focus on the drivers of the spike we have seen in some parts of youth offending recently."

Ardern said she had a high level of confidence in Hipkins to provide reset the needed in this portfolio - "one where we do have more work to do".

"To free him up for this area of government focus a significant part of his education portfolio will move to Jan Tinetti who has played an excellent role as associate education where she brings decades of experience as a teacher and school principal."

Wider changes Kiri Allan promoted to Justice Minister, Michael Wood picks up immigration Priyanca Radhakrishnan moves into Cabinet and gains associate workplace relations and safety Kieran McAnulty becomes a minister outside of Cabinet with a focus on regional issues, picking up emergency management and racing Duncan Webb to take over as chief whip. Chris Hipkins takes over police and passes Covid-19 Response to Ayesha Verrall, who also picks up research, science and innovation Dan Rosewarne and Soraya Peke-Mason to replace Faafoi and Mallard from the Labour List Meka Whaitiri picks up food safety from Verrall

Ardern said of Allan's promotion to the justice portfolio and associate finance role "Kiri is a very capable minister with a big future and this portfolio allocation is a sign of my confidence in her.

"Michael Wood takes on immigration which fits with his workplace relations portfolio and the government's focus on skills as part of our immigration reset in Covid economic recovery. Michael is also a very talented minister.

"Willie Jackson picks up broadcasting, which he comes to with extensive sector knowledge and experience.

"I've also made the decision to move Priyanca Radhakrishnan into Cabinet, retaining all her current portfolios and picking up associate workplace relations with a focus on migrant exploitation.

"Since becoming a minister outside of Cabinet in 2020 she has overseen the establishment of a new Ministry for Ethnic Communities and worked on complex issues like foreign interference and social cohesion.

"Labour whip Kieran McAnulty becomes a minister outside of Cabinet with a specific focus on regional issues."

"He will also take on the racing portfolio and use his past whip skills as Deputy Leader of the House, freeing up Minister Wood," Ardern said.

"One further change is housing where I'm bringing in public housing, building and construction under Megan Woods.

"This government has overseen the largest public-house build find decades as well as record number of housing consents but there is more to do."

MPs from around the country dialled into a Labour caucus meeting this morning.

Labour requires a vote be held for new members to join the Executive.