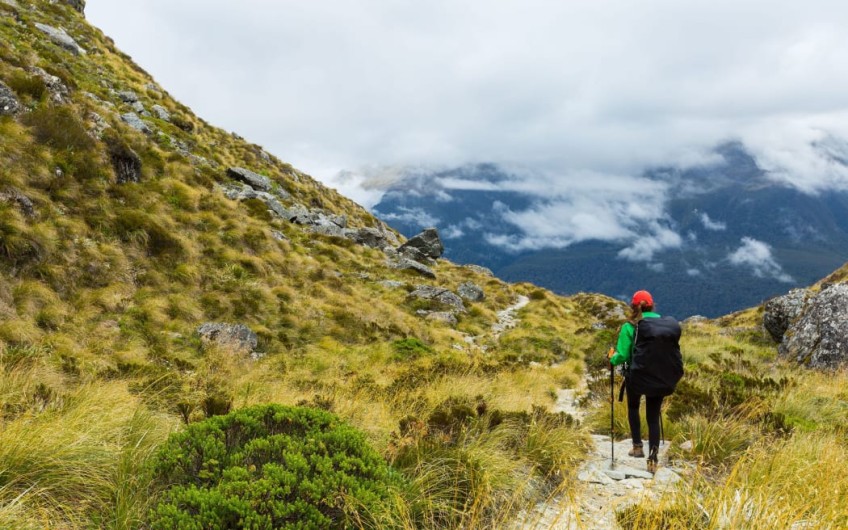 Some of the country's iconic Great Walks may be rerouted or huts moved as the Department of Conservation (DOC) prepares for more extreme weather due to climate change.

In the past few years, many of the walks have had to close for long periods of time after storms caused slips, wiped out tracks or destroyed key bridges.

Back in February 2020, it was a different story.

Days of torrential rain caused slips that severely damaged huts, bridges and tracks, and closed the Milford and Routeburn Great Walks for months.

Saxon said it was preparing for more unpredictable and frequent weather events - it operates on both tracks.

"We would normally, for example, fly people across an area of flooding five or six times a year in a normal year.

"I think two years ago, we sort of did 10 of those in the first six weeks," he added.

For his business, it means more planning, well-trained staff, more education for guests about what could be instore, good equipment and ensuring their lodges are prepared for whatever challenges are ahead.

"Certainly we've had to adapt a lot of our water intake systems, how we store water because we've got to the point where unbelievably we're getting close to running out. In fact, in some case we have run out and we've had to sort of scramble and add water storage."

Every year he said, they sat down with the Department of Conservation (DOC) to talk about the weather, track conditions, safety and what improvements needed to be made.

DOC heritage and visitor director Tim Bamford said there were big challenges ahead.

"The impacts of climate change have already been felt significantly across DOC's recreation network over the last five years, and it is driving up the cost of keeping the network to standard," he said.

DOC has drawn up a climate change adaptation action plan and more risk assessments are being done on some tracks.

That includes work with GNS Science to understand whether parts of the coastal section on the Heaphy Track are subsiding and what low tide beach access will look like over time.

On the Milford Track, DOC has replaced and resited the Mintaro Hut because of the risk of landslides in extreme weather.

"In some places, tracks and huts will have to be moved further from the sea or we'll need to design infrastructure to be better able to withstand storms and flooding, and then also the natural hazard risks at places will change over time."

He said the plan was crucial to working out the best ways to be more resilient.

"The more that these events occur, the more that we need to understand what the impacts will be.

"That's why we have the climate change adaptation action plan because it essentially gives the department the roadmap of what the work is that we need to undertake over the next five years to ensure that we have the right evidence and insights to inform these types of decisions."

In February, a storm forced the partial track closure of the Heaphy Track, wiping out bridges and damaging the trail.

Kahurangi Guided Walks operates on the Heaphy and Abel Tasman Great Walks along with other tracks.

"I started working on the Heaphy in 2007 and I've seen lots of track changes, and actually in many places you can't even see where the old track was because it's been eaten away either by the sea or by flooded rivers.

"So I've observed those changes, but it's been pretty seamless, so the new tracks go in before the old track washes out."

Heaphy Track guiding businesses have been collaborating more and were working with a helicopter company to help them complete the full track, she said.

"The actual location of that bridge it's incredibly tricky because it's very low-lying and that river is flooding. It's flooded in the past, there's been bridges washed away on the Heaphy in the past.

"So I can see they've got quite a tricky project on their hands because whatever they build is going to be very expensive and they're not going to want to get it wrong."

Despite the uncertainties ahead, DOC is urging people not to be put off booking a Great Walk - but to plan and be well prepared.