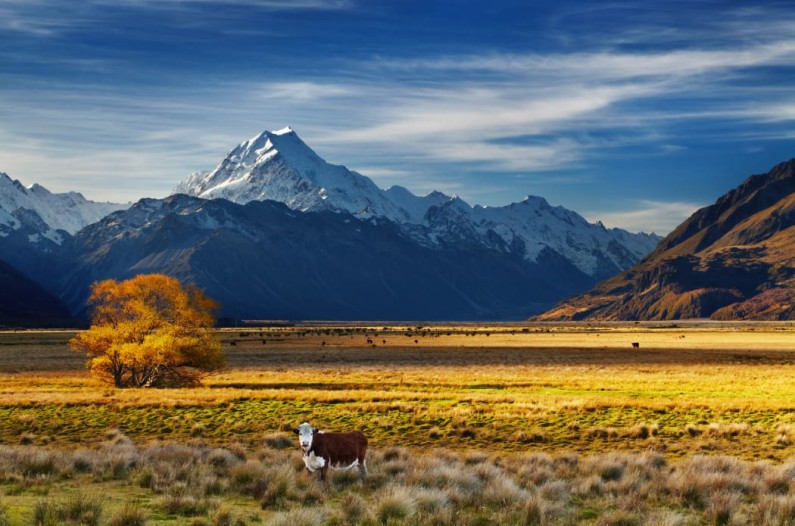 Motorists may encounter snow on alpine passes as a wintry blast hits the country.

More than one-and-a-half metres of snow has fallen at Aoraki Mt Cook since Tuesday. Photo: 123rf

MetService says cold air is forecast to bring snow down to about 500 metres across Southland and southern parts of Otago during Saturday.

"Strong gusty cold west to southwest flow, with a series of embedded fronts, are forecast to affect New Zealand through to Monday, then start to gradually ease on Tuesday," MetService said.

"However, snowfall is not expected to meet warning criteria at this stage, but could affect higher roads and passes and also cause stress to livestock across parts of the South Island."

It marked the first snowstorm of the season for the Southern Alps.

More than 1.5 metres of snow has fallen at Aoraki Mt Cook since Tuesday.

The Avalanche Advisory has issued warnings for dangerous conditions in alpine and high alpine areas of the national park, and a moderate danger alert for sub alpine areas.

The advisory said snow was expected to fall above 1000 metres with winds forecast to increase to severe gale.

It said anyone planning to head into avalanche terrain would need advanced safety skills and very careful route-finding.

"The wind direction will shift to the southwest over the weekend and wind speeds are forecast to increase to severe gale again.

"The risk of Wind Slab avalanches will increase."

The advisory also recommended anyone heading above the snowline to take an ice axe and crampons.

Severe gales were also possible for parts of the country this weekend.

In the North Island, Metservice has issued strong wind watches for Coromandel Peninsula, Bay of Plenty west of Te Puke, Taupo, and Taihape about and east of Waiouru, Tararua District, and Hawke's Bay.

All watches were in place until Sunday morning.

In the South Island, winds might approach severe gale in exposed places in Tasman north of Belgrove, Dunedin, and North Otago until Sunday morning.

MetService said southwest winds might reach severe gale for Coastal Southland including Stewart Island and Clutha, but they should lessen this evening.