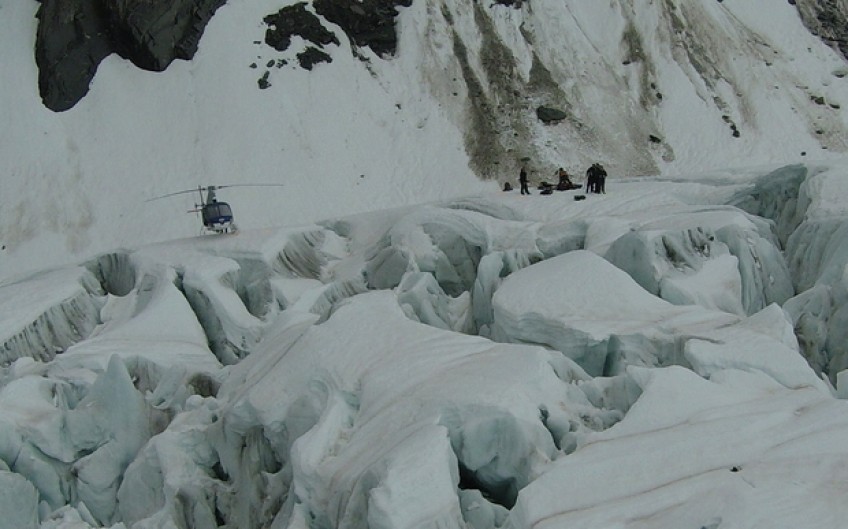 The country's aviation watchdog has admitted its inspectors were too soft on scenic flight operators by not verifying their claims, which were sometimes misleading.

The admission follows last week's sentencing of company directors in relation to a helicopter crash on Fox Glacier in 2015 which killed all seven people on board.

"Our oversight of [the operator] should have been better. If it was we would have placed more pressure on the operator to lift their safety performance," Civil Aviation Authority (CAA) chair Nigel Gould said at a media briefing this morning.

The helicopter crashed as it tried to take off from the Glacier - on a day when other operators had decided not to fly due to the conditions, Mr Gould said.

Charles Gibson, father of Josephine Gibson who died on that flight, said "the oversight process is completely rotten".

The CAA needed to be held to account for its shortcomings, he said.

"There's seven dead, the CAA has failed in their due diligence."

CAA inspectors initially concluded the company, J P Scott, was safe to continue flying, but on further investigation found the operator had been misleading them about safety-related matters.

Flights were suspended in May 2016, six months after the crash.

"We became aware there were discrepancies between what the operator was telling us and what our investigators were unearthing," he said.

"Our formal investigation found the operator had a poor safety culture, with significant shortcomings in its management and systems. We also discovered the operator had previously, on multiple occasions, misled CAA officers about the matters which were relevant to its compliance with Civil Aviation rules," Mr Gould said.

"Our investigation concluded J P Scott and AMD (Aviation Manual Development) did not take all practicable steps to prevent employees and passengers being harmed."

Following the realisation inspectors were being misled, the CAA conducted an internal review in early 2017 to find out what it could learn.

New Zealand had the highest number of helicopters per capita in the world, but only had two inspectors available to scrutinise their operations.

The deputy director of general aviation Steve Moore said CAA had since quadrupled the number of helicopter operations inspectors from two to eight, and strengthened their training following the crash.

Those two inspectors had "big workloads" at the time and were responsible for conducting oversight of 100 or so helicopter operators, he said. The Authority also had prior problems recruiting staff leading to a "relatively short dip" in numbers, he said.

That meant their expertise was being "spread a bit more thinly," said Mr Gould.

"That might have been a factor in the scrutiny that they were providing of the operators," Mr Moore said.

"They were too quickly reassured by comments from the operator and didn't take the time or indeed the necessary steps to ensure and gain their independent reassurances to what they were being told," Mr Gould said.

"We were aware of having difficulty maintaining capability in that area," Mr Gould said.

The inspectors did not inspect the alpine and glacier landing sites, and were more focused on management oversight, Mr Moore said.

"We can't be everywhere, we can't go and look at every flight to make sure that operators and pilots are keeping to the minimum standards required," he said.

The training changes would "ensure when inspectors conduct their oversight activity, they'll do it properly. For example, they'll know they must dig deep to verify information provided to them," Mr Moore said.

Neither Mr Gould or Mr Moore would say whether a lack of scrutiny contributed to the Fox Glacier crash.

A final accident report is expected later this week.

The internal review also found the way inspectors documented their interactions with the operator were inconsistent, Mr Gould said.

"Non-compliance [with the rules] had not always been formally reported as findings. Inspectors were also too trusting and didn't verify the information that was being given to them," he said.

The CAA said it had made significant changes following that crash, and now required inspectors to "dig deeper" and come back with proof of compliance, rather than reassurances from the operator.

Mitch Gameren, the 28-year-old pilot who was killed in the crash along with six tourists. Photo: Supplied / Facebook

"The majority of staff who were involved in the oversight of J P Scott's operations have since moved on into other employment," Mr Gould said.

He would not say whether the inspectors had been fired or resigned voluntarily.

Operators were now also required to have a formal safety management system that showed the CAA they had identified and managed risks, he said.

"The TAIC report provided sufficient cause for him to seek independent reassurance of the changes that have been made since the crash," Mr Gould said, and PWC was commissioned to review the CAA's oversight of the scenic tourist flight sector.

That report "revealed some documentary evidence gathered by our inspectors during the early part of the [2014-2018] period had, at times, been inadequate," he said.

Despite the inadequacies, "appropriate safety actions" had been taken when required, Mr Gould said.

There had been no increase in prosecutions since the oversight regime was strengthened, he said.

"We have full confidence in the systems that support their safe operation," Mr Gould said.

Today's announcement was raising questions in the aviation community, particularly about why it came just days before the official Transport Accident Investigation Report was released.

Aviation New Zealand's chief executive John Nicholson said he was looking forward to the release of the that report to shed more light on what happened and the CAA's role in it.

An aviation commentator, Irene King said, she was flabbergasted the CAA spoke to media ahead of its release, before the findings and cause of the accident were understood.

"What CAA described was systemic failure of the regulatory system. But why they would be making comments prior to the TAIC accident investigation coming out - who knows," she said.

"All I can help think is that they are commenting to prejudice or deflect the findings away from them."

The CAA had lost the trust of parts of the industry, and people were wary about how they disclosed safety issues for fear of prosecution - even if such disclosures would make the industry safer, she said.