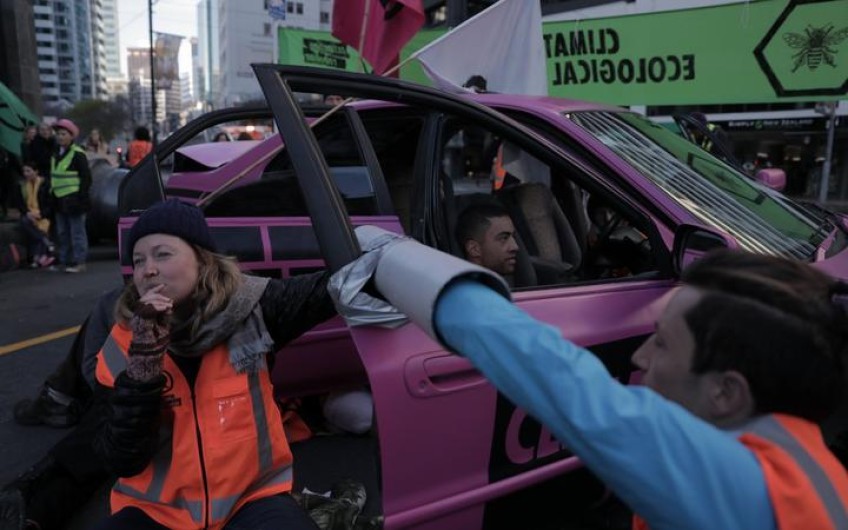 Climate protesters have blocked off Stout St in central Wellington, gathering around the Minsitry of Business, Innovation and Employment (MBIE) office.

Stout Street is shut off between Lambton Quay and Ballance Street, with a pink car one end and a pink boat at the other.

"Going on the streets, and disrupting the process, enough that people are willing to engage with how bad the problem is, is the kaupapa of Extinction Rebellion and it's been very successful so far," spokesperson Sea Rotmann said.

Protester Jen Olsen told Morning Report that the area that's been blocked off will be a site of protest "all day today".

She said they were targetting the MBIE office to demonstrate against the petroluem exploration permits that have been granted.

"And at a time of climate crisis, we think that is just a gross irresponsbility."

Extinction Rebellion is prepared to cause disruptions to make their point but today's demonstration was aimed more at the government rather than the public, Ms Olsen said.

The protest is the first of almost 60 events in capital cities around the world.

While planning was meticulous for the event today, Ms Olsen said, they also recognise they probably won't gather the same big number of protesters as those in bigger cities around the world.

"But we're the first country in the world [today] that is taking this action. We wanted to make it something that would be successful."

Protesters will gather at Midland Park at 7am before being assigned to specific locations around the city.

Main Image: Extinction Rebellion protesters have blocked off Stout St in central Wellington, in a bid to cause disruptions outside MBIE's office. Photo: RNZ / Dom Thomas