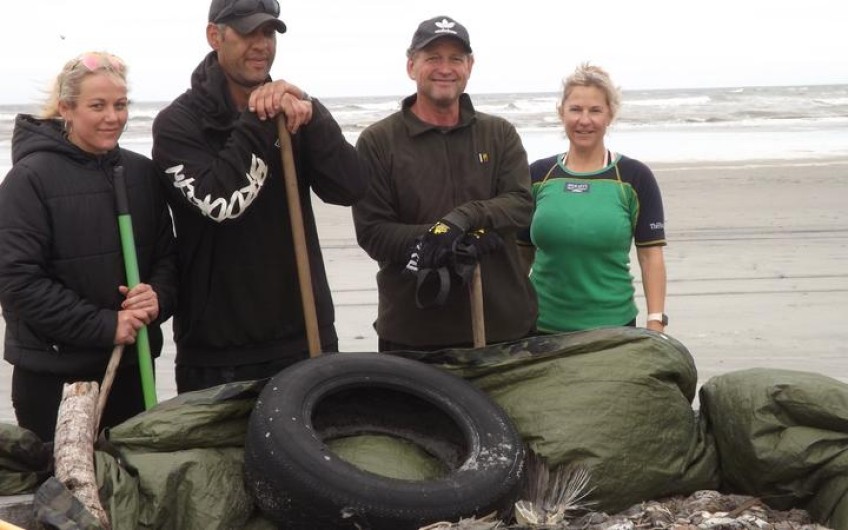 The theory that it was 1080 that killed about 600 rats, an octopus, a calf and other animals that washed up on a West Coast beach is highly unlikely, a Department of Conservation (DOC) regional manager says.

As many as 600 rats washed up on Westport's North Beach over the weekend to the horror of locals.

DOC said they may have been killed by a recent 1080 poison drop 140km away and washed down the Buller River after heavy rain battered the coast.

However, the department hoped toxicology tests, which will be carried out by Landcare Research and Massey University Palmerston North, would give them a clearer idea about how they got there.

Westport resident Kylie Coleman was just doing what she did most weekends on Saturday - heading down to the beach to cook up some food.

When she arrived, she was shocked to see hundreds of dead, decomposing rats strewn across a kilometre of the coastline.

She horrified not just by what she saw, but also what she smelt.

"It was so bad that I could taste it for a good hour afterwards. I brushed my teeth three times afterwards and chucked some chewing in - it was disgusting.

"It was that decomposing, yuck, smell. It's not good."

She said she couldn't work out what had happened.

"I couldn't believe it, like I didn't know at first what was going on or where they'd come from.

"So I got a couple of shovels and went back and helped them."

Ms Coleman and six others spent the next three hours collecting over 600 rats, loading them onto a trailer.

But, as she discovered, it wasn't just the carcasses of the rats that littered the beach.

"I found an octopus, the biggest starfish I had ever seen, a shag, there was a calf found and a whole heap of fish."

Everyone on the coast was baffled by what had happened.

But one local, Bradley Scott, put forward a theory to explain how the rats ended up there.

"There had been a poisoning operation [by DOC] somewhere up in Springs Junction [recently], which is like 100 kilometres upstream from the river."

He said the heavy rains battering the coast over the weekend could have washed the poisoned rats down the Buller River and into the ocean.

"Soon as those rats get washed out to sea, everything targets them, it's like bait."

Mr Scott thought the toxic rats could have poisoned the other animals.

DOC's West Coast regional director of operations Mark Davies said the 1080 theory was however just that - a theory - and highly unlikely.

He said the 1080 drop was 140km away from the beach and it was hard to believe that the rats had been brought down all that way from Lewis Pass National Reserve in one large group.

"There's so many questions and unknown answers that we just need to get some people looking at it."

Mr Davies said all the rats had since been cleared from the beach and buried, except for 12 that had been frozen and another 12 that were chilled.

The chilled rats would undergo autopsies while the frozen rats would be subject to toxicology tests at Massey University and Landcare Research.

He expected the findings to be available at the end of the week.

As for how they ended up on the beach, he said that it was a question for both the West Coast Regional Council and the Buller District Council as they were responsible for managing the river and beach respectively.

The regional council could not be reached for comment. However, the mayor of Buller District, Jamie Cleine, said the first step was to work out how the rats died.

Once that had been established, he said he would work backwards from there with the regional council to find out how the rats ended up on the beach.

Main Image: Kylie Coleman (left) and three of the other seven volunteers who worked together to pick up dead rats that washed up on a West Coast beach. Photo: Supplied / Kylie Coleman