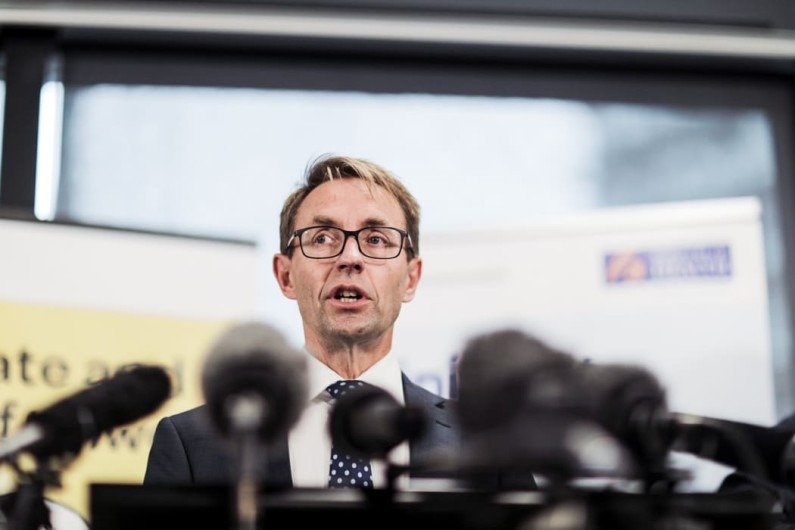 'Half of actual cases are being reported': Dr Ashley Bloomfield

Thousands of new cases of Covid-19 are being reported every day in New Zealand, but this is likely to be half of the number of actual cases, Dr Ashley Bloomfield says.

The Director-General of Health is giving an update on the response to Covid-19 and the Omicron variant.

There were 7441 community cases reported today, but Dr Ashley Bloomfield said many cases are not being reported.

He said the Ministry of Health tried to estimate the level of reporting by looking at the positivity rate of the border workers who were undergoing constant surveillance testing.

"Based on that, we think that probably about half of actual cases are being reported. And some of those cases not being reported are because people don't have symptoms ... others the symptoms may be very mild so they don't get tested, whilst others may be testing, but not reporting the result."

With a further 29 deaths with Covid-19 today, Dr Bloomfield said the impact of the severity of Omicron was still visible.

"I mentioned a couple of weeks ago we're also looking at how those deaths are categorised and we're very nearly through that work."

Cases per thousand have dropped from the peak for all regions, but have picked up a bit again in Northland and Auckland.

Dr Bloomfield said some of this increase may just reflect an increase in reporting, perhaps from people who went away over Easter.

"We have got increases in the number of cases in the seven-day period to 8 May. It increased in seven of our DHB regions: Waitematā, Auck, and CVot - modest, so not the 50 percent increase that people have been talking about - and also in the Waikato and Hutt Valley and Capital and Coast."

"We thought our case numbers would come back to a baseline of around 3000 to 5000 a day, in fact they seem to have bottomed out at around 7500 a day. And hospitalisations have levelled off a the mid-300s.

"It seems we've probably reached the nadir, the bottoming out, of both cases and hospitalisations from this outbreak and we may well be on our way back up again."

In North America, cases have been rising again - starting on the east coast - and the variant driving most of that increase is the BA.2.12.1 subvariant.

"We have detected a few cases of that here in New Zealand, all having come from the USA, it now makes up 40 percent of cases in the USA and their hospitalisations are also increasing again."

In South Africa, the BA.4 and BA.5 subvariants have driven quite a large increase in cases, he said, and some of each of those have been seen in New Zealand.

The UK and Australia have experienced quite distinct Omicron outbreaks of BA.1 and BA.2, but New South Wales is following a similar pattern to New Zealand which have both experienced mostly BA.2 variants.

He said there was more emerging evidence about the effect of vaccination on people who have also been infected.

"Studies that have been published recently show that for people who have had Omicron infection, if they go and have a booster dose after a delay that affords a much higher level of protection than just the protection afforded by having been infected," Bloomfield said.

He said the advice is to wait three months before getting a booster, but it "is absolutely worthwhile ... to help protect yourself from potentially being reinfected and of course to protect others".

The government has been preparing for the onset of winter, which is expected to bring the usual winter illnesses that would add to pressures on the health system from Covid-19 and could increase severity due to comorbidity.

Modeller Michael Plank was this morning warning of the risks of a second wave as people's immunity from the virus wanes.

Dr Bloomfield said the Ministry was preparing for another potential peak which could be quite high over winter, and was anticipating and planning for concurrent influenza and other infections.

Some cases of influenza have been detected in New Zealand including in the student population in Dunedin and in Queenstown. While flu cases in the northern hemisphere were quite low over winter, they have been increasing again now and Australia has also been seeing some cases.

"Flu and Covid at the same time, about around 3 percent of people they have found this in the UK and people can be particularly unwell with it."

He said it helped to get both the flu vaccine and to be up to date with the Covid vaccinations.

There was also modelling of RSV, respiratory illnesses and Covid all at the same time, and a peak in the middle of winter was expected.

Dr Bloomfield urged people to seek flu vaccination if they are eligible or offered it, or seek it out even if they are not.

The government was also finalising eligibility and timing for a fourth dose. Dr Bloomfield said the technical advice was to wait until six months after the third dose, and - particularly important for older people - it was good to get people's resistance highest right during the winter-time peak of July and August.

The United States today is also marking more than a million deaths from Covid-19, the highest official toll in the world - although other countries may have higher tolls than are officially reported, according to the World Health Organisation.